One issue I wish this post made clearer was the specific mechanism by which financial “innovation” induced foreign investors to buy US asset-backed securities such as subprime mortgage-backed securities and CDOs, prior to the crisis. The big flow was from European investors. One big driver was regulatory arbitrage. Basel II allowed for AAA-rated assets held by banks to get a 20% risk weighting, and if they were hedged by an AAA counterparty, the risk weight dropped to zero. So if you could hedge an AAA asset for less than your spread over your cost of funding, Eurobank risk weighting systems treated the resulting trade as “freeing up capital” and discounted future value of the cash flows over the life of the transaction. For traders, this was free money. As Andrew Ditter wrote in 2010:

The links between the demand for CDOs and the “negative basis trade” that was arguably a widespread form of bonus fraud. (When a AAA instrument was insured by an AAA guarantor, internal reports typically treated it as if all the expected income in future years was discounted to the present. As we know now, in the overwhelming majority of cases, bonuses were paid on income that was never earned. This mechanism was THE reason many banks would up holding so much AAA CDO inventory – it was more lucrative for the traders to retain and “hedge” it than sell it.)

Many of the Eurobanks, particularly Deutsche Bank, SocGen and UBS, were active participants in the CDO business. UBS was so keen to play the negative basis trade that they bought other banks’ CDOs. Another big universe of RMBS/CDO investors were the German Landesbanken. They were dumb money and preferred stuffees. Virtually all are in liquidation.

Importantly, the supreme position of U.S. dollar in new financial innovations and instruments contributed to halting the declining trend of the dollar as a debt-financing currency and reversed the falling role of the dollar in the 2000s.

First of all, an unprecedented increase in U.S. dollar-denominated asset-backed security (ABS) issuance contributed to the revival of the dollar as a debt-financing currency in the 2000s. Currency shares in ABS and non-convertible bond issuance is provided in Figure 7. The share of U.S. dollar in ABS issuance rose from around 65 percent in 1999 to 75-80 percent on the eve of the financial crisis (as shown in Panel B), while the share of euro increased gradually from around 15% to in 1999 to about 20 percent, respectively (as demonstrated in Panel A). 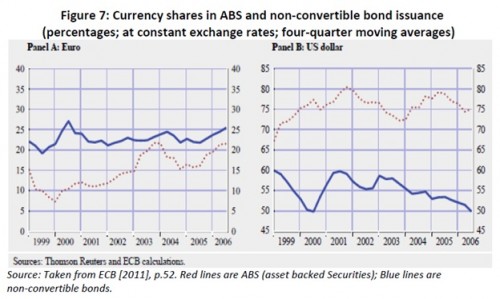 ECB [2011] explains some factors underlying the decision on the currency denomination of ABS issuance as follows: Firstly, the origin of the underlying collateral, as well as investors’ preferences, seems to be an important factor in the decision on the currency denomination of ABS issuance. In fact, substantial amounts of collateral are located in the U.S. Secondly, the development of new financial innovations and instruments plays an important role in influencing a currency’s prominence in global financial markets. In particular, the securitization function can transform risky, long-term loans (subprime mortgage in the U.S., for example) into seemingly credit-risk free, dollar-denominated long-term debt securities such as ABS.

In addition, the dominant position of the dollar in credit default swaps (CDSs) is thought to support the prominence of U.S. dollar-denominated ABS issues. A CDS is a swap contract in which the buyer of the CDS protection makes a series of payments to the seller of it, and receives a payoff if a credit instrument goes into default. CDSs function as a hedging credit risk associated with the underlying assets. LCFIs bought large amounts of CDSs on ABS and CDO written by insurance companies.[31] Table 1 demonstrates currency breakdown of credit derivatives from May 1 to July, 2010. While the percent of the dollar in total transactions amounted to 63%, its share reached 57% in total notional size.

Secondly, the rapid growth of U.S. dollar-denominated safe, short-term and liquid assets facilitated the revival of the dollar as debt-financing currency in the 2000s. Table 2 reports total asset-backed commercial paper (ABCP) outstanding by the location of the sponsor and the funding currency as of January 2007. In total, $714 billion out of $969 billion, or 73.7 percent, was issued in the dollar. Notably, most European banks financed their off-balance vehicles by issuing ABCP denominated in dollars rather than in euro. 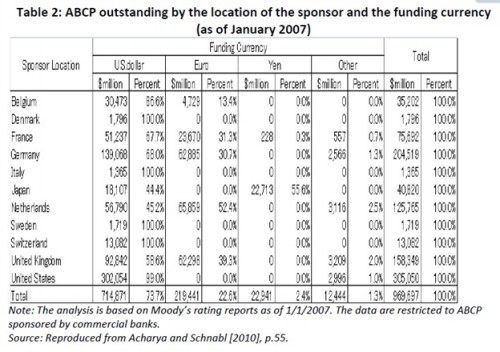 Also, there are no official data on the currency denomination in the repo market, which is at the center of the globally integrated wholesale funding process. Table 3 presents liabilities and equity of the domestic economy and amounts held by rest of world as of June 2007. Foreign holdings of Treasuries bonds made up the largest percentage of the amount outstanding (45%), the share of Agency bonds, corporate bonds (non asset-backed), and corporate ABS+ABCP (asset-backed commercial paper) reached 21%, 25%, and 22%, respectively, which were a higher share than total foreign holdings (13%). U.S. treasuries have played the role of “universally accepted collateral,” that is, the asset most widely accepted as collateral in repo markets.[32] Taking the higher share of foreigners holding U.S. private debt securities into account, a broad range of private debt instruments, whose underlying assets are located in the U.S., has been also used for “universally accepted collateral” in the global repo market in the 2000s. It is, therefore, likely that the dollar has played the dominant role as collateral assets in the global repo market.