By Dan Kervick, who does research in decision theory and analytic metaphysics. Cross posted from New Economic Perspectives

Everybody is very excited about Thomas Piketty’s new book Capital in the Twenty-First Century, whose English translation is due out on March 10th from Harvard University Press. The book studies long term trends in the accumulation and concentration of wealth, and in the evolution of inequality. The argument of the book is intensely data-driven, and has been billed as a game changer since it first appeared in French earlier this year.

Matt Yglesias reproduces a chart from the book, and calls it “the chart the debt alarmists don’t want you to see”. However, if I were a debt alarmist, I don’t think I would be very much moved by the chart, and wouldn’t worry so much about others seeing it. Let me explain. Here is Piketty’s original version of the chart, and here is Yglesias’s colorized reproduction : 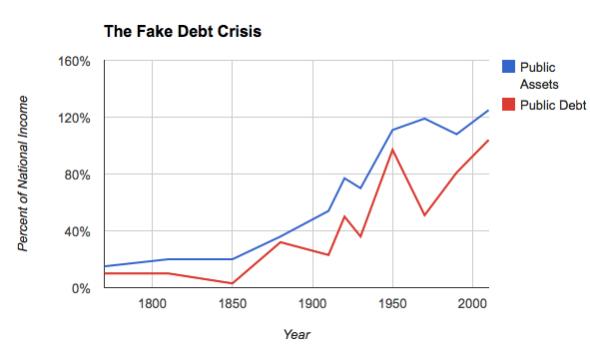 “Public assets” in Piketty’s usage denotes all of a government’s fixed assets, financial assets and land. Interestingly, Piketty excludes such non-produced assets as “energy and mineral resources, timber, spectrum rights, and the like” in his calculations of public assets.

So what the chart shows, assuming Piketty’s numbers are accurate, is that the United States is solvent in the sense that its public assets exceed its public debt liabilities. But even the debt alarmists know that the US government possesses a great deal of land and fixed capital wealth. What they seem to argue, though, is that we are on a fiscal path that will lead to higher borrowing costs and debt service payments, and either to greater real tax burdens or to ultimate dollar devaluation as we monetize and inflate away some of the debt.

There are very good responses that can be made to counter these fears, but I don’t think appealing to the value of US fixed assets and land is one of them. If progressives respond to the debt alarmist arguments only by arguing that the US government has positive real net worth, and can always pay its debt by selling off Yellowstone, the Executive Office Building or the USS Nimitz, they have clearly lost the political argument. Even the Greeks have valuable properties like the Acropolis to sell if they run into further sovereign debt crises, and are determined to stay with their crippling commitment to the Euro. But nobody would find that to be a reassuring point. The focus in countering the debt worriers should be on economic sustainability arguments that do not depend on the ultimate capacity of government to liquidate its fixed and real public wealth in a fire sale.

(Personally, I think the US government should be accumulating more public wealth, and commanding more of the nation’s capital as part of a commitment to an expanded strategic direction-setting role, with a new activist determination to drive innovation and structural transformation through mission-driven public investment. But that’s an argument for another time.)

I will be curious to read more in depth about how Piketty measures public financial assets. But for a country that produces its own currency, its financial assets are effectively infinite in nominal terms. Obviously, that doesn’t mean that producing unlimited quantities of currency would be sound policy. But it does mean that such a government has financial resources that far exceed the market value of the money and money-denominated assets it happens to have in its current possession. That is especially the case now in the US and other western societies, where stagnating, high unemployment economies should be able to power a surge in public spending though expanded net private sector holdings of currency and currency-denominated government financial assets. Given how far these economies are from reaching their underlying economic capacity, they should be able to do this without producing significant inflation.

The very concept of “capital” takes on a different tone and shape when applied to national governments as opposed to private firms. The financial capital of a currency-issuing government does not really consist in the existing units of the currency that the government has in its possession, but in the whole collection of tangible and intangible assets that permit a government to continue to issue those units of currency, and to have them accepted in exchange for goods and services the government wishes to acquire from the private sector on behalf of the public to pursue public purposes. Those assets don’t just consist in the physical and operational infrastructure the government uses to run its monetary system, but include all of the foundations of the government’s power, authority and reputation. It really makes little sense to try to measure a government’s financial capacity by adding up the notes, bills, bonds and electronic account balances it happens to hold in its possession at any given time.