Yves here. Ilargi is duly skeptical of the enthusiastic financial press response to an increase in home equity liquidation, um, borrowing using home equity lines of credit, or Helocs. While the party line is that this development reflects an rise in home equity and increased consumer confidence, Ilargi stresses that prices appreciation that the Fed has created, the Fed can also take away (of course, the way that investors appear to be betting is the Fed will be sorely lacking in nerve as far as tightening is concerned until the economy is clearly overheating, which is so far away that they can lend and otherwise party for a very long time).

But I have to wonder how many of these Heloc borrowers are doing so out of necessity or near-desperation. See this post by Wolf Richter on hunger in the US as evidence. As Business Insider pointed out last week, investors have forgotten what a normal recovery looks like. Muddling along with high levels of long-term unemployment does not qualify. How many people who are effectively liquidating home equity are doing so to deal with a medical emergency, or pay down credit card or student debt? None of that reflects optimism; it’s trying to keep the wolf at bay.

In a recent article, the Wall Street Journal uncovers a big problem in the US housing market, albeit, curiously, without necessarily identifying it as a problem. It would be nice if Americans could trust their once most trusted media to give them the best possible covering of a topic, but the Wall Street Journal apparently prefers to pick the side of, well, Wall Street. The problem not presented as one is the resurgence of American homes as ATMs, of borrowing against a property’s perceived value through home equity loans or home equity lines of credit (Helocs).

The article claims that lenders are being “conservative” since they’re merely handing out 85% LTV instead of the 100% ones they once did, but how conservative that is really depends on the future expectations of the values. And that’s one area where very little is conservative anymore. If lenders can only convince borrowers that the housing market has recovered, they can do their favorite business again: hook mortgagees into major debt increases. That shouldn’t be too much of an issue if only they can show their clients lines like this:

According to the Federal Reserve, net household equity stood at about $10 trillion in the fourth quarter of last year, up 26% from the prior year.

When I first read that, I had to check if they weren’t perhaps referring to the city of London, but sure enough, this is supposed to be about American housing. If it were anywhere near the truth, I don’t understand why Federal Reserve chief Janet Yellen was so cautious about housing prospects a few weeks ago, saying problems “could prove more protracted than currently expected.” If a 26% rise in equity in one year makes her express herself in such negative terms, you wonder what it would take to make her more optimistic. What also makes it hard(er) to believe are falling home sales and mortgage originations, price rises that exist only in the highest price ranges, plus a flood of other data that have come in recently. But there it is, printed in the Wall Street Journal , so why not take out that loan? Why not act as if the past decade, and the crisis it gave birth to, never happened? After all, people want loans, and bankers want commissions.

US Borrowers Tap Their Homes at a Hot Clip (WSJ)

A rebound in house prices and near-record-low interest rates are prompting homeowners to borrow against their properties, marking the return of a practice that was all the rage before the financial crisis. Home-equity lines of credit, or Helocs, and home-equity loans jumped 8% in the first quarter from a year earlier, industry newsletter Inside Mortgage Finance said Thursday. [..] … this year’s gains are the latest evidence that the tight credit conditions that have defined mortgage lending in recent years are starting to loosen. Some lenders are even reviving old loan products that haven’t been seen in years in an attempt to gain market share.

In 2013, lenders extended $59 billion of Helocs and home-equity loans. The last pre-boom year near that level was 2000, when lenders extended $53 billion, according to Inside Mortgage Finance. “We’re seeing much more aggressive marketing campaigns [for Helocs] by banks in locations where home prices have risen,” said Amy Crews Cutts, chief economist at Equifax Inc.[..] “We expect to see quite an uptick in Heloc activity” in the spring … 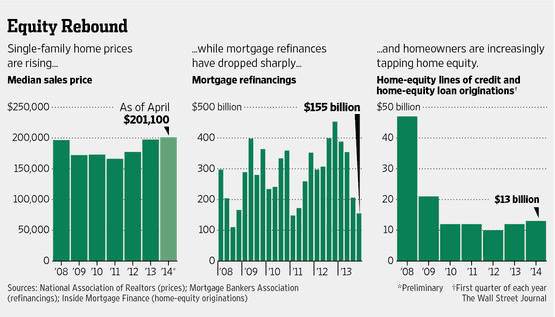 Some individual banks have seen their Heloc originations rise much faster than the national average. Bank of America, which has increased marketing for Helocs, said customers opened $1.98 billion in Helocs in the first quarter, up 77% from the first quarter of 2013. Matt Potere, who leads Bank of America’s home-equity business, said [..] “The driver is increased customer demand,” Mr. Potere said. “It’s an effect of higher consumer confidence and improving home values.”

Are we sure that “the driver is increased customer demand”, not “much more aggressive marketing campaigns [for Helocs] by banks”? Or is this just two elements coming together in a happy coincidence that will benefit everyone, a real win-win?

[..] During the housing boom, Helocs were a source that many consumers tapped to remodel their homes, buy new cars and boats, travel and send their children to college. Lenders often let them borrow up to 100% of their home’s value, in the expectation that prices would continue to rise. However, when prices fell and borrowers weren’t able to repay, banks faced steep losses.

This time, lenders seem to be offering Helocs only to borrowers with good credit in locations where home values have risen, said Keith Gumbinger, vice president of mortgage-information site HSH.com. During the boom, homeowners could borrow up to 100% of their home’s value, said Mr. Gumbinger. Now it is most common to see a maximum of 80% and sometimes 85%, he said. “Relative to where they were, lenders are still very conservative,” said Mr. Gumbinger. “Will the excesses of yesterday return? Only time will tell.”

Even if we would take that at face value, which we don’t, the question remains where home values are going. There can’t be too many people left who haven’t figured out that it’s the Fed’s hugely expensive QE programs that have lifted asset prices to where they are today, even if they don’t understand why extending QE ad infinitum would be very counter-productive, and is therefore of the table. If that were not so, then, unless the present generation of central bankers were absolute geniuses, it would be hard to explain why their pre-decessors didn’t do what they now do, decades ago. Whether that is clear or not, it would seem only logical to see what asset prices do when QE is gone, both for investors and for home owners. If we can agree that QE has distorted prices of all assets, then home prices must have been distorted too. And if the present record stock exchanges are any indication, it’s a safe bet that they are heavily overvalued. So loans against what some may see as the present ‘value’ of a home are entered into based on – probably greatly – distorted assessments. Lenders mind that less than owners should; and what does BofA care? They’re too big to fail anyway.

[..] “It’s really about the stabilization of the real-estate market and property values going up. It gives us more comfort as to the value of the homes – the equity is there and the client profiles look strong,” said Tom Wind, executive vice president of home lending at EverBank, based in Jacksonville, Fla. [..] Some lenders are even bringing back “piggyback” loans, which serve as a second mortgage and cover part or all of the traditional 20% down payment when purchasing a house. Piggybacks nearly vanished during the mortgage crisis.

Piggybacks bring back the 100% LTV loan. It may not be entirely subprime, but we’re well on the way there.

Banks have been emboldened to originate new Helocs in part because new regulatory requirements completed this year and last year make it less burdensome to do so. And in an era where interest rates are expected to rise in the future, some lenders say they prefer Helocs over some other home-equity products because interest rates on Helocs rise as interest rates rise, making the products potentially more profitable.

Oh well, there you are. Regulators have weakened regulations once again, always a good first step towards trouble. Lenders can now aim for those ‘potentially more profitable products’ again, that have already brought us so much joy in this new century. And got millions of American families unceremoniously thrown out of their homes. What’s not to like?

Ian Feldberg planned to open a $200,000 Heloc this week with Belmont Savings Bank to help pay his son’s college tuition. The medical-device scientist purchased his home in Sudbury, Mass. for a little over $1 million in 2004, and estimates that its value dipped as low as $800,000 during the financial crisis. However, after applying for the line of credit, he found that its value had completely recovered. “I’m very pleased about that.

A medical-device scientist with a million dollar home who can’t afford college tuition. If that isn’t a sign of the times, what is?

To summarize, if that’s still necessary, home prices, like prices for all assets, are way higher than they would have been without QE. And still 20% of mortgage holders can’t afford to even sell their homes, let alone upgrade. But already lenders are waving promises of cheap money in front of their faces again. Have we not learned anything at all from the depths of the crisis? The answer is a resounding No. We can still fool ourselves and each other into a form of mass psychosis, thinking we’re much richer than we are, and act accordingly. It’s enough to make one that much more despondent about the future of this failed experiment that was once the land of the free. If you know what’s good for you, ignore things like this WSJ article, and if you can’t be free, at least be debt-free. Because after the fake asset values of the illusionary economy fall back to earth, the debt will remain. And y’all will feel a lot less wealthy.