It’s not hard to notice the contrast between the posture of a Republican state attorney general in Colorado, John Suthers, who opened up an investigation when the Denver Post exposed pervasive overbilling by foreclosure mills, versus the conduct of a Federal task force dedicated to pursuing foreclosure fraud.

The Colorado case filed on Tuesday (embedded below) gives a detailed account of how the two largest foreclosure law firms in the state colluded to set prices on various services well above permissible levels, garnering as much as $97 million in ill-gotten gains since 2006. By contrast, as we discussed at length yesterday, the latest Department of Justice foreclosure settlement, this with Citigroup for $4.5 billion in cash, managed the difficult task of taking a full nine pages to say almost nothing about what the giant bank actually did.

The Colorado filing is a thing of beauty in its specificity, even as it describes brazen misconduct. As the case explains, Fannie and Freddie set caps on the fees that law firms can charge, which is $1225 or $1250. In addition to that, the firm can also pass on costs to be reimbursed. Those costs are required by contract to be both reasonable and market rate. So the firms systematically inflated costs and colluded with other firms so that everyone would put in more or less the same exaggerated charges to avoid detection.

Of the two firms sued, The Castle Law Group and Aronowitz & Mecklenburg, the owners of Aronowitz, which is the second largest firm, moved quickly to settle for $10 million and either wind down or sell the business. Castle Group is fighting.

Here are the key allegations: 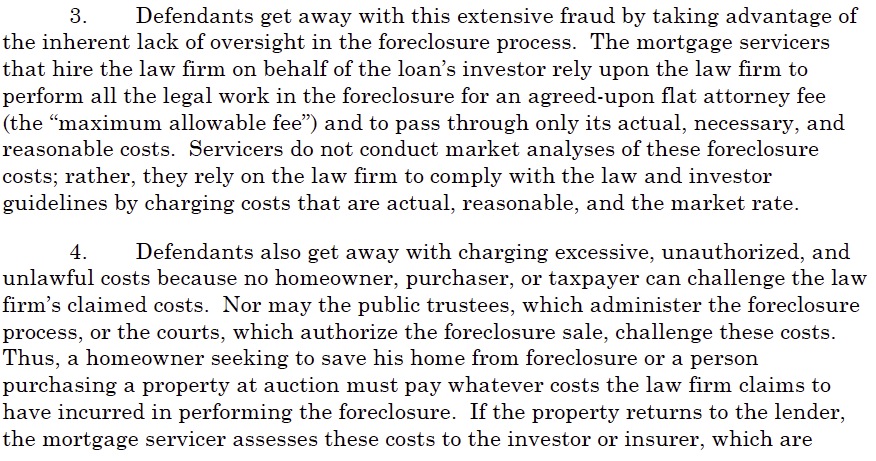 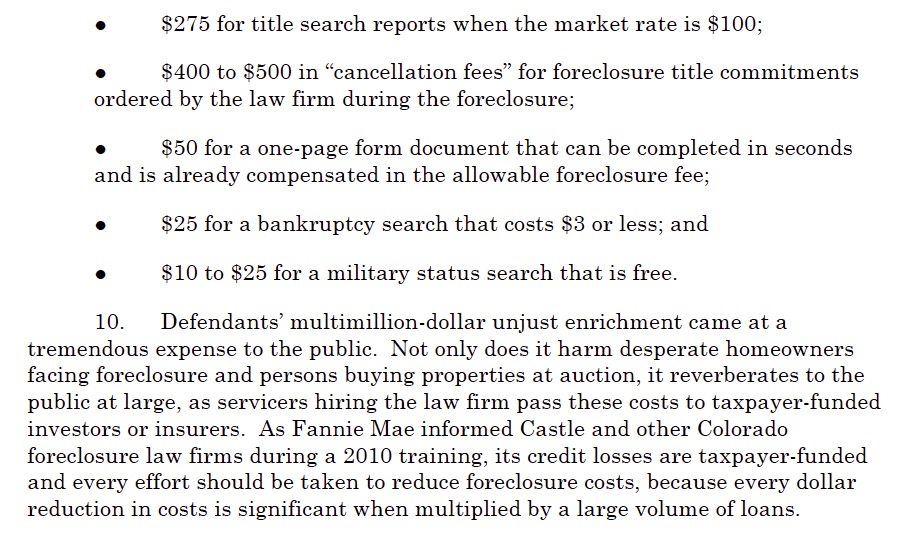 The case makes for good reading, with juicy details on the planning and execution of the scheme, and the usual damning quotes in e-mails.

The causes of action include making false and misleading statements about the price of services, antitrust violations (price fixing) and violations of Colorado’s Fair Debt Collection Act.

It’s unclear how far the reverberations from the Colorado cases will be felt, but several of the illegal practices alleged in the lawsuits are widespread across the foreclosure industry nationwide….

[Richard] Benenson [attorney for Aronowitz & Mecklenburg] said they will likely shutter the firm’s process service business, Xceleron, which was at the core of the attorney general’s investigation against them…

Some of the lawsuits’ allegations could have far-reaching effects on foreclosure law firms across the country, Benenson said, because lawyers’ use of affiliated businesses to handle foreclosures is “common practice.”

“Many foreclosure law firms, especially those of any size across the United States, are likely at risk for these very same issues,” Benenson said.

This is a rare case of the system working, with the press unearthing a large scale abuse and a public official pursuing the allegations. And it is also important that lawyers are being targeted, even if it is comparatively low-life lawyers.

Attorneys have become critical enablers of white-collar misconduct, and they almost never suffer any adverse consequences. And while foreclosure mills are decidedly wanting in cachet, they are big enough money machines that the partners of the top mills can and often do become major figures in state bar associations, which means that they are effectively immune from discipline. The fact that state bar associations did nothing about widespread misconduct by foreclosure mills like the Offices of David J. Stern in Florida and the Steven J. Baum firm in New York should be cause for shame.

While this suit does not threaten the really big bad guys, it does pave the way for other suits, including investor litigation. And it also frustrates the Administration’s goal of pretending foreclosure abuses are a thing of the past. So even though this is a small win, it’s a step in the right direction.