We’ve inveighed against the dangers of two Orwellianlly-branded “trade” deals, the TransPacific Partnership and its ugly twin, the Transatlantic Trade and Investment Partnership. Both negotiations have been shrouded in a deeply troubling level of secrecy, with their draft terms being given classified status and Congressmen kept largely in the dark as to their content (summaries provided by the US Trade Representative aren’t remotely adequate, since as in all contracts, much hinges on exact language).

The business press in the US has tended to amplify Administration messaging, that both deals are moving forward. In fact, as we’ve covered in some detail, the TransPacific Partnership is in quite a lot of trouble, and as we’ll discuss below, the Transatlantic Trade and Investment Partnership is also going pear shaped.

So far, it’s the TransPacific Partnership that has gotten the press in the US, due in part to its strategic role (it’s meant to isolate China) as well as the heated opposition of some of the intended partners to key terms (such as Chile and Malaysia to provision that would prevent them from having the sort of capital controls that reduced the damage that they suffered during the financial crisis).

Congress, in a remarkable show of spine, has gone into opposition over the TPP due to the Administration’s refusal to provide remotely adequate information about the negotiations, as well as concern over what they can see of the provisions.

The controversy over the TPP increased when Wikileaks exposed some draft chapters, one on intellectual property and the other on the environment. They which how bad the deals were as well as how the “partners” oppose many of the sections of the drafts.

But heretofore, the assumption has been that the Transatlantic Trade and Investment Partnership is moving towards completion, and the only risk is whether Congress will dig in its heels as it has with the TPP. That assumption now looks questionable, since Germans are wildly opposed to the deal, and the souring of US/German relations over US wiretapping and spying (and its refusal to commit to a big change in conduct) means the German government is much more likely not to stand up to the US and refuse to go along with provisions that are destructive to national interests, namely, secret “investor” panels that supercede national laws and regulations.

By way of background, we described how these panels work in a 2013 post:

Even though no one has seen the exact language of the text, since it is being kept under wraps, both deals are believed to strengthen and extend investor rights, which means give them easier access to the courts. Consider this description from a July presentation by Public Citizen:

And that’s alarming in light of some of the cases already brought before these panels in existing trade agreements like NAFTA. For instance:

Eli Lilly is suing the Canadian government for not having the same extremely pro-drug-company patent rules. It is seeking $500 million in damages for two drugs that Canada approve to be sold as generics. If Eli Lilly prevails, other drug companies are sure to follow suit.

Vattenfal, a Swedish company, is a serial trade pact litigant against Germany. In 2011, Der Spiegel reported on how it was suing for expected €1 billion plus losses due to Germany’s program to phase out nuclear power:

According to Handelsblatt, Vattenfall has an advantage in seeking compensation because the company has its headquarters abroad. As a Swedish company, Vattenfall can invoke investment rules under the Energy Charter Treaty (ECT), which protect foreign investors in signatory nations from interference in property rights. That includes, according to the treaty’s text, a “fair and equitable treatment” of investors.

The Swedish company has already filed suit once against the German government at the ICSID. In 2009, Vattenfall sued the federal government over stricter environmental regulations on its coal-fired power plant in Hamburg-Moorburg, seeking €1.4 billion plus interest in damages. The parties settled out of court in August 2010.

Now consider what this means. These companies are not suing for actual expenses or loss of assets; they are suing for loss of potential future profits. They are basically acting as if their profit in a particular market was guaranteed absent government action. And no one else enjoys these rights. Consider highly paid workers in nuclear plants. Will they get payments commensurate with the premium they’ve lost over the balance of their working lives from the phaseout of nuclear power? Will cigarette vendors in Australia get compensated for the decline in their sales? Commerce involves risk, which means exposure to loss, yet foreign investors want, and seem able to get, “heads I win, tails you lose” deals via these trade agreements. 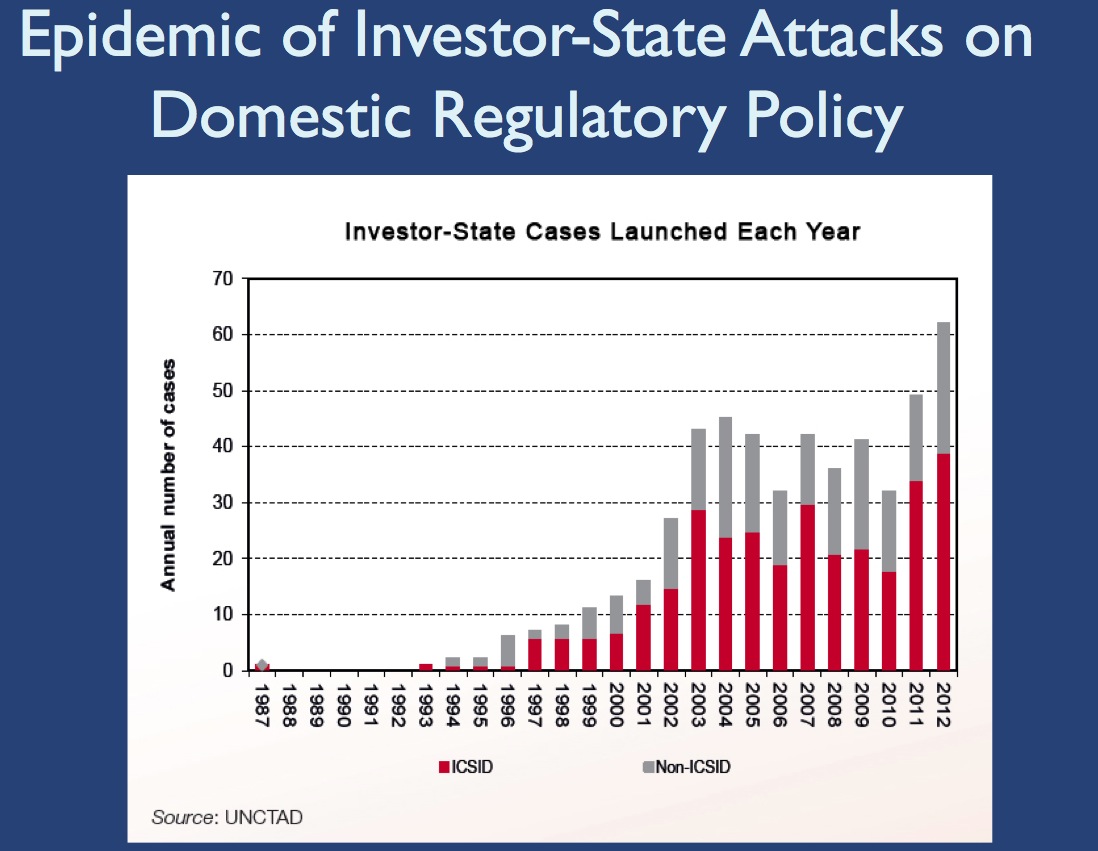 Back to the current post. You may have noticed the suit against Germany for phasing out nuclear power. That has brought the issue of the investor panels to the attention of the press and public. In the Huffington Post, Larry Cohen describes the widespread opposition to the Transatlantic Trade and Investment Partnership in Germany:

As negotiations move forward on the Transatlantic Trade and Investment Partnership (TTIP), a wide range of German elected and civic leaders are in disbelief that the U.S. remains serious about including Investor-State Dispute Settlement (ISDS). From the German perspective, that’s a failed 20th century approach….

By most benchmarks, Germany is the most successful large economy in the world, with a rising standard of living, an educational system that creates real opportunity to move from school to work, a deep economic safety net, and worker participation in economic decision making….

Much more could be said about the divergent paths of our two nations in the past 60 years. But thanks to a suit brought by the Swedish energy firm Vattenfall against the German government, opposition to ISDS is nearly universal…

Ironically back in the U.S., proponents of TTIP and the more imminent Trans Pacific Partnership (TPP) criticize those of us who oppose ISDS as anti-trade Neanderthals. But in my discussions with German leaders last week, it is clear that the U.S. looks like the Neanderthal by supporting ISDS, coupled with dramatic increases here in economic inequality and nearly unlimited influence by corporate America in all aspects of our lives. If [US Trade Representative Michael] Froman proceeds with ISDS in the final version of the TPP, Germans and most other Europeans will never trust a future TTIP, even if there are ISDS carve outs for certain national legislation. They can read the handwriting on the TPP wall very clearly.

Yves here. This is priceless. Even though Japan and other prospective TPP partners have serious reservations about the investor panels, along with numerous other provisions, Froman appears to be operating as if he can bulldoze them, when the Japanese media indicates that this is a non-starter (and if Japan is not in the deal, there is no deal). But the US messaging (and the US media readings are likely to get more play in Europe than the Asian accounts) are that the talks are on track. So the overhyping of the state of play with the TPP may backfire with the TTIP talks. It would be delicious to see the Obama Administration hoist on its propaganda petard.