Lambert here: I guess my cunning plan to get people to stop watching TV isn’t working.

The media industry is different

The media industry is undergoing a consolidation process. After the proposed merger between Comcast and Time Warner Cable, Rupert Murdoch’s Century Fox reportedly offered to buy Time Warner. The offer was rejected, but the prospect of a merger between two media groups of such size has reignited a public debate on the dangers of excessive media concentration.1 Unlike milk production, news production is central to the democratic process. Citizens receive political information from mass media and they use it to decide how to vote. By choosing what to report and how to report it, a media company can affect the views of its users and hence their voting decisions. This is not just a theoretical possibility. DellaVigna and Kaplan (2007) found that the entry of Fox News increased the national vote share of Republicans by 0.4 to 0.7 percentage points. The potential for political influence is what most people think of when they talk about the power of the media.

Leveson Report (a comprehensive inquiry into the practices of the British Press following the News of the World scandal) concluded: “It is only through this plurality, specifically in relation to news and current affairs, that we can ensure that the public is able to be well informed on matters of local, national and international news and policy and able to play their full part in a democratic society”.2 Is CNN more or less influential than Yahoo News?

In a recent CEPR Discussion Paper, I propose a new media power index that aggregates power across all media platforms (Prat 2014). Unlike existing measures, the basic units of analysis in the new index are not markets but voters. For any given voter, one can determine the set of news sources that he or she follows. For instance, a particular voter may read the New York Times and watch ABC news, and those are the news sources that can influence her political views. Once we aggregate across voters, we can determine the power of a media company as its ability to change people’s exposure to information and the way they vote. The media index measures the potential for a given media company to shift vote shares from one political party to another.

The new index does not measure actual media influence. Rather, it focuses on the maximum potential for media power. This avoids the need to speculate on the possible motives of media owners and the possible reactions of media users, which are exceedingly difficult to determine ex ante. To measure this maximum potential, we answer the question, “assuming that the only goal of a media owner were to favour one political party, and that media users took the information they receive at face value, how much could the media owner influence voting behaviour?” The answer to this question identifies an upper bound to the power of a media company. It provides a basis for prudential regulation by directing attention to the highest damage potential of any media ownership pattern.3 Define the attention share that a voter devotes to a particular news source as one divided by the number of sources that voter uses, and zero if he does not follow that source. Voters that focus on a narrower selection of sources will thus have large attention shares attached to each source. The overall attention share of each source is the average attention share by source over all voters. Within this framework the power of a media company is a simple function of its overall attention share.

Media power in the US

The new index is easy to compute provided individual media consumption data are available. This information is available in the US from a biennial Pew Institute survey, going back to the 90s. Each respondent is asked where they get their political news and the set of answers includes all major sources in all main platforms, including new media.

The media power index values for all major US news organisations in 2012 are shown in Figure 1. For media conglomerates the index includes all owned news sources on any platform. For instance, in 2012 News Corp owned both Fox and the Wall Street Journal. The index also covers multiple distribution channels for the same source. For instance, the New York Times entry includes both print readers and online readers. 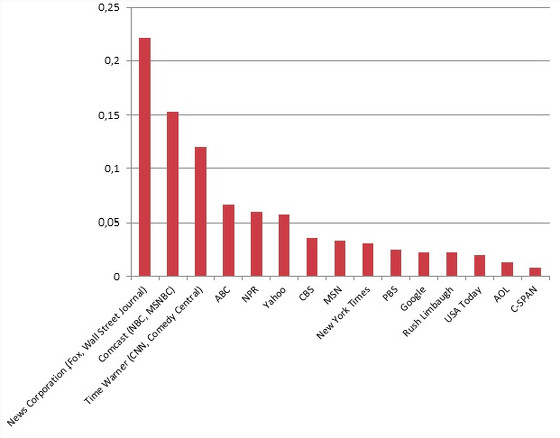 • The first finding is that the four most powerful media companies are mainly television-based.

This is because a vast majority of Americans get their news exclusively from television and typically from a very limited number of broadcasters, giving them a high attention share. The most powerful press source is the New York Times in ninth position and the most powerful new media source is Yahoo News in sixth position. In spite of the fascination for new media, the number of users is limited and they typically access multiple other sources, hence the low value of their power index. Media regulators should continue to be particularly wary of any merger involving the leading television groups.

• The second finding is that the absolute value of the index is high.

The 22% index value for News Corp means that within this model and based on data available their owner could potentially turn a an electoral defeat with a 22% vote margin into an electoral victory. Namely, suppose that under neutral reporting party A would win with 61% of the votes and party B would lose with 39% of the votes. News Corp could shift 11% of the votes, thus guaranteeing that party B wins with 50% of the votes plus one. Of course, this is an upper bound to potential influence. It does not imply that News Corp will actually be able or willing to shift 11% of the votes. It just says that there is a set of conservative assumptions that lead to that figure.

Crucially for media regulation, these large power estimates are in marked contrast with the low market concentration of most media platforms in the US as gauged according to standard measures (see Noam 2009). It is true that media markets appear relatively fragmented, but this is not the right level of analysis for media plurality. Most American voters receive their news from a very small number of news sources. This creates the potential for the large political influence that this index captures.

1.For a recent survey see: A Prat and D Strömberg, The Political Economy of Mass Media, Advances in Economics and Econometrics: Theory and Applications, 2013.

2. In the early 2000’s the Federal Communications Commission developed the Media Diversity Index, which first assigned equal weight to all outlets within a platform and then aggregated across platforms according to given weights.

3. The CEPR Discussion Paper considers a number of alternative conceptual underpinnings to the index, allowing for heterogeneous attention patterns or ideological media segmentation. As it turns out, different assumptions have minimal effects on the relative ranking of different media companies. All insights are delivered by the simplest form.