Yves here. Most people outside the financial services industry don’t realize that many countries in Europe have banking systems that are obviously riskier than America’s. A crude metric of vulnearbility is the size of banking industry total assets compared to GDP. Iceland prior to its meltdown came in at around 900% of GDP. The UK is roughly 600%, which is one big reason why beating back the threat of a Scottish exodus was so critical. Unexpected disruption could prove hard to contain.

It should be noted that looking at the size of assets in the banking system makes the US look better than it really is. America has gone furthest of any advanced economy in moving what were once bank businesses into the capital markets. What the crisis exposed is that banks were exposed to many of those risks and that letting certain type of non-bank financial players founder was deemed to be just as impermissible as letting a major bank or then investment bank go down. For instance, banks had supposedly off balance sheet entities, like structured investment vehicles and credit card securitizations, where in practice they were exposed to losses. And the officialdom rescued various markets, which included supporting non-bank actors, like the repo market (money market funds), credit default swaps (AIG) and residential mortgage backed bonds (in that case, from legal liability, and the parties saved included mortgage servicers).

This post takes a more rigorous look at the countries most at risk in the event of a systemic shock. The UK and France look the most wobbly. The post also singles out banks like ING that the authors contend are too big to be saved. While some journalists and analysts have raised these issues (Deustche Bank come up regularly), this analysis may prove harder to ignore.

The Global Financial Stability Report of the IMF (2009) defines systemic risk as “a risk of disruption to financial services that is caused by an impairment of all or parts of the financial system and that has the potential to cause serious negative consequences for the real economy”. With the recent financial crisis, interest in the concept of systemic risk has grown. The rising globalisation of financial services has strengthened the interconnection between financial institutions. While this tighter interdependence may have fostered efficiency in the global financial system, it has also increased the risk of cross-market and cross-country disruptions.

Measures of systemic risk are generally based on market data. Two questions may be answered with such data because historical prices contain expectations about future events.

• First, how likely is it that extreme events will occur in the current financial markets?
• Second, how closely connected are financial institutions with one another and the rest of the economy?

Obtaining the answers to those questions is at the heart of most of the recent research on systemic risk. The shape of the distribution of financial returns and the strength of the dependence across financial institutions are both essential to determine the speed of the propagation of shocks through the financial system and the level of vulnerability to such shocks.

In the aftermath of the recent financial crisis, the literature has focused primarily upon externalities across financial firms that may give rise to liquidity spirals. In particular, it became clear that network effects must be addressed to fully capture the contribution of banks to systemic risk. Thus, these measures of systemic risk consider the risk of extreme losses for a financial firm in the event of a market dislocation. Acharya et al. (2012) and Brownlees and Engle (2012) have proposed an economic and statistical approach to measure the systemic risk of financial firms. Following Acharya et al. (2012), the externality that generates systemic risk is the propensity of a financial institution to be undercapitalised when the financial system as a whole is undercapitalised.

In this context, there are likely to be few firms willing to absorb liabilities and acquire the failing firm. Thus, leverage and risk exposure are more serious when the economy is weak. This mechanism can be captured by the expected fall in the equity value of each firm conditional on a weak economy. Then, the capital shortage for each firm is considered the source of a deadweight loss to the economy. In the econometric methodology proposed by Brownlees and Engle (2012) for US financial institutions, the model estimates the capital shortage that can be expected for a given firm if there is another financial crisis. The model is composed of a dynamic process for the volatility of each firm’s return and its correlation dynamic with an overall equity index. Innovations are described by a non-normal (semi-parametric) joint distribution that reflects the sensitivity of the firm’s return to extreme downturns in the equity market.

In the case of European institutions, there are several additional issues beyond the aforementioned components to measure the risk exposure; for a given firm, a financial crisis may be triggered by a world crisis (such as the Subprime Crisis), a regional crisis (such as the European debt crisis), or even by a countrywide crisis (such as the Greek debt crisis for Greek banks). Thus, a natural extension of the previous models is a multi-factor model, where several elements may jeopardise a financial firm’s health. Furthermore, the parameters of the model, in particular the sensitivity to market movements, may change over time. This, in turn, requires a model that allows for time-varying parameters. In this paper, we adopt the Dynamic Conditional Beta approach recently proposed by Engle (2012), in which a Dynamic Conditional Correlation (DCC) model is used to estimate the statistics that are required to compute the time-varying betas. Another issue with non-US institutions arises from the asynchronicity of the financial markets. A world crisis (for instance, initiated in the US market) may affect other regions either the same day or one day later. We design a specific econometric model to address asynchronous markets.

Our empirical analysis is based on a large set of approximately 400 European financial firms, which includes all banks, insurance companies, financial-services firms, and real-estate firms with a minimum market capitalisation of one billion euros and a price series starting before January 2000. We investigate several aspects of systemic and domestic risks among European financial firms. In particular, we evaluate the relative contribution of countries and individual firms to the aggregate systemic risk in Europe. Our approach allows us to explicitly identify global systemically important financial institutions (G-SIFIs), using the terminology of the Basel Committee on Banking Supervision, by estimating a firm’s capital shortfall in case of a worldwide shock or a Europe-wide shock. We also identify domestic systemically important financial institutions (D-SIFIs) by investigating the impact of the rescue of a firm on the domestic economy.

• The countries with the highest levels of systemic risk are France and the UK.

These two countries contribute to approximately 55% of the total exposure of European financial institutions (Table 1). 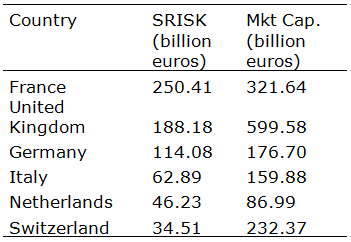 • The five riskiest institutions over the recent period have been Deutsche Bank, BNP Paribas, Barclays, Crédit Agricole, and Société Générale.

Together, they bear almost 314 billion euros, i.e., 39% of the total expected shortfall in the case of a new financial crisis (Table 2). 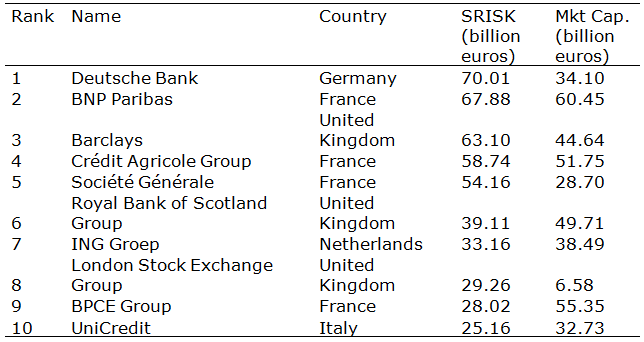 • Even after correcting for differences in accounting standards, the total systemic risk borne by European institutions is much larger than the one borne by US institutions.

For certain countries, the cost for the taxpayer to rescue the riskiest domestic banks is so high that some banks might be considered ‘too big to be saved’.

• For ING Group in the Netherlands, Credit Suisse in Switzerland, Danske Bank in Denmark, Barclays in the UK, BNP Paribas in France, or Bank of Greece in Greece, the systemic risk measure represents more than 3% of domestic GDP (Table 3).

Table 3. Systemic risk by financial institution in % of GDP

The European Banking Union will start soon. At the end of this year, the ECB will be the single supervisor of the largest banks of the Eurozone. Given the uncertainty about the quality of bank’s balance sheets, the ECB has undertaken an Asset Quality Review (AQR) and stress tests to evaluate the potential capital shortfall of large banks, including domestic systemically important banks. The AQR and stress tests are relatively expensive and time consuming processes, which require a lot of inputs from banks. It will be interesting to compare the results of the AQR with our ranking. Furthermore, our methodology can be used to measure how bank conditions have changed over time and serve as a monitoring system as the Eurozone banking system evolves.

Authors’ note: Systemic risk measures based on the methodology described in this paper are available on the CRML (Center for Risk Management — Lausanne) website at http://www.crml.ch.