Yves here. A new ruling by the European Union Court of Justice is tantamount to shutting the gate door after the horses are in the next county. Nevertheless, it’s a striking if not well publicized indictment of US casualness about lobbing charges against countries on its enemies list.

Anders Fogh Rasmussen departs in two weeks from the North Atlantic Treaty Organization (NATO), where he has been secretary-general since 2009, with a present from the General Court of the European Union Court of Justice. It’s a golden tongue depressor.

In a judgement issued in Luxembourg on Thursday, September 18, the court ruled that the European Union (EU) cannot lawfully introduce sanctions against states, corporations, state organizations, or individuals without stating reasons which can be substantiated in evidence to a standard of proof tested in court.

Rasmussen, a former Danish politician, has been the most active European advocate of sanctions against Russia on claims that Russian forces have mounted an invasion of eastern Ukraine. The evidence Rasmussen has offered has included hearsay intelligence reports and a display of satellite photographs, which NATO published on August 28. 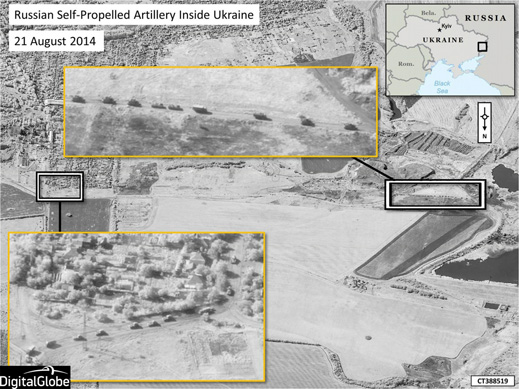 In accompanying text, the photographs were interpreted to “show a significant escalation in both the level and sophistication of Russia’s military interference in Ukraine… These latest images provide concrete examples of Russian activity inside Ukraine, but are only the tip of the iceberg in terms of the overall scope of Russian troop and weapons movements… Also released were images showing substantial activity inside Russia in areas adjacent to the border with Ukraine. NATO believes this activity is being conducted in direct support to forces operating inside Ukraine, and is part of a highly coordinated and destabilising strategy.” 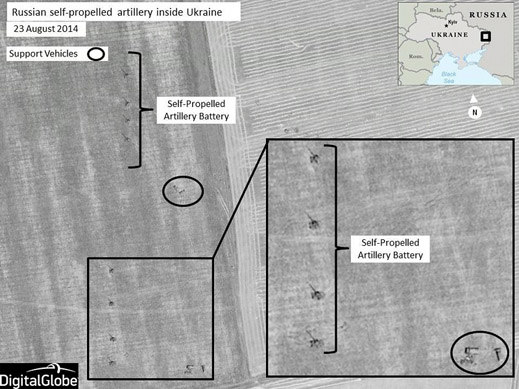 Rasmussen followed with interpretations by tweet: “Russia’s aggression against #Ukraine is a wake-up call. It reminds us that our freedom, security & prosperity can’t be taken for granted… We welcome all genuine efforts to find peaceful solution to Crisis In #Ukraine. But what counts is what is happening on the ground… Russia is now fighting against #Ukraine, IN Ukraine. Russian troops & tanks are attacking Ukrainian forces… While talking about peace, #Russia hasn’t made 1 single step to make peace possible. Instead of de-escalating, #Russia only deepened crisis… 1st time since end #WW2 that 1 European country tried to grab another’s territory by force.”

The evidential value of the NATO evidence and Rasmussen’s interpretations has been challenged by a group of former CIA analysts. “Accusations of a major Russian ‘invasion’ of Ukraine, “they claim, “appear not to be supported by reliable intelligence. Rather, the ‘intelligence’ seems to be of the same dubious, politically ‘fixed’ kind used 12 years ago to ‘justify’ the U.S.-led attack on Iraq. We saw no credible evidence of weapons of mass destruction in Iraq then; we see no credible evidence of a Russian invasion now.”

Argumentation like this over justification for the campaign of US and EU sanctions against Russia has so far not been challenged by the Russians in international court. Iran has been less reticent.

Since 2010 Iran has been the target of sanctions starting with the trade in equipment and technology for uranium enrichment and nuclear weaponry. In January 2012, the EU froze assets belonging to the Central Bank of Iran, and banned all trade in gold and other precious metals with the bank and other public bodies. Six months later, an EU ban on the import, purchase and transport of Iranian crude oil came into force. European companies were also stopped from insuring Iranian oil shipments. In March 2012, SWIFT, the Brussels-based agency which processes global banking transactions, cut the Iranian banks from its system, making it almost impossible for money to flow in and out of Iran through the regular channels. In October 2012, the EU banned transactions with Iranian banks and financial institutions, as well as the import, purchase and transportation of natural gas from Iran, the construction of oil tankers for Iran, and the flagging and classification of Iranian tankers and cargo vessels.

After the sanctions campaign commenced, Bank Mellat went to court in the UK and the EU Court of Justice, challenging the allegation that it was connected to Iran’s nuclear weapons and ballistic missile programmes. The bank commenced litigating in London in November 2009. Almost five years later, in June of this year, Bank Mellat won a ruling from the UK Supreme Court, the final court of appeal, rejecting the basis in evidence for the sanctions imposed on the bank. This followed a similar condemnation by the European Court, issued in January 2013. That story, and the two court judgements, can be read here.

“Mere allegations” were inadmissible to support sanctions, the two courts have ruled. The EU sanctions action against the bank had been illegal, the Luxembourg panel ruled, because “the [EU] Council did not… comply with the obligation to assess the relevance and the validity of the information and evidence against the applicant submitted to it, with the consequence that those measures are tainted by illegality. Lastly, the Council infringed the obligation to state reasons as regards the second, third, sixth and seventh reasons relied on against the applicant.”

To date, the UK Treasury has not paid the billion-pound compensation sought by Bank Mellat. Nor have the Iranians sued in the US courts.

This week, the Central Bank of Iran won a separate lawsuit against the EU. The new ruling can be read here. The judgement was issued by three judges — Heikki Kanninen of Finland (below left), Eugene Buttigieg of Malta (centre), and Czech Judge Irena Pelikánová (right). Pelikánová also ruled in the Bank Mellat case last year.

For the second time, the EU court has ruled that sanctions are illegal if they are based on allegations which cannot stand up in court. With an irony yet to be tested in the US, the EU court has also ruled that state organizations and companies targeted by sanctions have the same human right to due process, as human beings, Russian dissidents, and Americans.

The ruling ends two years of proceedings in Luxembourg. The Iranian central bank’s case was that EU sanctions were unlawful because they were based on evidence which was in error; because they violated the EU’s obligation to give defensible reasons for its action; because the EU had violated fundamental human rights, including the protection of property, the right of defence, the right to effective judicial protection, and the right to proportionality between act and penalty.

The EU argued that state bodies or corporations like the Central Bank can’t claim human rights. The court dismissed the contention. “EU law contains no rule preventing legal persons which are governmental organisations or State bodies from taking advantage of fundamental rights protection and guarantees. Those rights may therefore be relied on by those persons before the Courts of the European Union in so far as those rights are compatible with their status as legal persons… It follows that the applicant may rely on the protection and guarantees linked to fundamental rights which it invokes.”

The court went on to apply these rights to the reasons and evidence required to uphold sanctions. “The statement of reasons required by Article 296 TFEU must disclose in a clear and unequivocal fashion the reasoning followed by the institution which adopted the measure in such a way as to enable the person concerned to ascertain the reasons for the measures and to enable the court having jurisdiction to exercise its power of review.”

The court also dismissed the EU argument that its sanctions decision was defensible for the reasons which had been published. “It is necessary to examine whether the statement of reasons in the contested act contains explicit references to the first and second criteria or, at least, to one or other of the two and whether, if that is the case, the statement of reasons may be regarded as sufficient to enable the applicant to determine whether the contested act is well founded and to state a defence before the Court, and to enable the Court to exercise its power of review.”

Rasmussen is to be replaced at NATO headquarters on November 1 by Norway’s former prime minister, Jens Stoltenberg. After he left NATO, Rasmussen’s predecessor, Dutchman Jaap de Hoop Scheffer, took a part-time job as a university lecturer in Leiden. He is also on the payroll of Air France-KLM as a board director; he’s receiving €25,000 in annual stipend.

Rasmussen reportedly wants more. He has yet to announce fresh job plans.