This is Naked Capitalism fundraising week. 261 donors have already invested in our efforts to shed light on the dark and seamy corners of finance. Join us and participate via our Tip Jar, which shows how to give via credit card, debit card, PayPal, or check. Read about why we’re doing this fundraiser, what we’ve accomplished in the last year, and our current target.

Yves here. Richard Vague has been kind enough to allow us to feature an extract from his recent book, The Next Economic Disaster: Why It’s Coming and How to Avoid It. I first met Richard several years ago at the Atlantic Economy Summit. If my memory serves me correctly, he was then taken with the conventional view that debt was a dampener to growth…meaning government debt. The issue of what caused our economic malaise and what to do about it troubled him enough to lead him to make his own study, and he has come to reject the neoliberal view that government debt is problem and must therefore be contained.

This view implies, as many readers have pointed out, that the great lost opportunity of the crisis was restructuring mortgage debt. That would also have allowed housing prices to reset to levels in line with consumer incomes. Vague also mentions a less-widely-commeneted on debt explosion prior to the crisis, that of business debt. One big contributor was an explosion in takeover debt for private equity transactions. Indeed, a lot of experts were concerned about a blowup due to the difficulty of refinancing these deals in the 2012-2014 time horizon. But ZIRP and QE produced enormous hunger among investors for any type of asset with non-trivial yield, so the Fed enabled the deal barons to refinance on the cheap.

By Richard Vague, currently the managing partner of Gabriel Investments and the chairman of The Governor’s Woods Foundation, a non-profit philanthropic organization. Previously, he was co-founder and CEO of an an energy company and two consumer banks

Both sides miss a much more central point.

Rapid private debt growth also fueled what were viewed as triumphs in their day—the Roaring Twenties, the Japanese “economic miracle” of the ’80s, and the Asian boom of the ’90s—but each of these were debt-fueled binges that brought these economies to the brink of economic ruin.

There are two claims you can count on: Booms come from rapid loan growth. And crises come from booms.

Alan Greenspan, who was chairman of the Federal Reserve until 2006 and who presided over much of the runaway increase in mortgage loans that was central to the 2008 crisis, wrote recently in reference to this crisis that “financial bubbles occur from time to time, and usually with little or no forewarning.”

It was neither a “black swan event” nor a crisis in confidence. There was plenty of forewarning—in fact years’ worth. This crisis was predictable, and major financial crises of this type can be seen—and prevented—well in advance.

While runaway loan growth was the cause of the crisis, loan growth at a more moderate level is a favorable driver of economic growth. This seeming paradox is one of the subjects of this book.

(Note: I use the terms economic growth and GDP growth interchangeably in this book—GDP growth is simply the sum of private, business, and government spending plus net exports. And income closely mirrors GDP, so whenever I mention GDP growth, it encompasses income growth too.)

For large economies, private loan to a GDP growth of roughly 18 percent or more in five years is the level at which that growth becomes excessive. (I discuss the few exceptions in the book.) On top of this, apart from any crisis, the accumulation of higher levels of private debt over decades impedes stronger growth. Money that would otherwise be spent on things such as business investment, cars, homes, and vacations is increasingly diverted to making payments on that rising level of debt— especially among middle- and lower-income groups that compose most of our population and whose spending is necessary to drive economic growth. Debt, once accumulated, constrains demand. And debt growth here and abroad over any sustained period always exceeds the income and economic growth it helps create, a troubling phenomenon intrinsic to the system.

Runaway growth in private debt (especially high mortgage loan growth)—and not growth in government debt, a lack of consumer or business confidence, or myriad other explanations—was the immediate cause of the 2008 crisis. US mortgage debt grew from $5.3 trillion in 2001 to $10.6 trillion in 2007, an astonishing doubling in six years. This contributed to high absolute levels of private debt to GDP, a level that reached 173 percent in 2008. In larger, more developed economies, when high growth in private debt is coupled with high absolute levels of private debt, it has almost always led to calamity. Since this buildup of excessive private debt occurred over several years, it should have made the prediction of the crisis and its prevention both possible and straightforward.

But it wasn’t just mortgage loans. Business debt to GDP picked up markedly starting in 2006, and overall private debt increased at a pace rarely seen during the last century in the United States—an increase of 20 percent to GDP in the five years leading up to the crisis. (See Chart 1.) 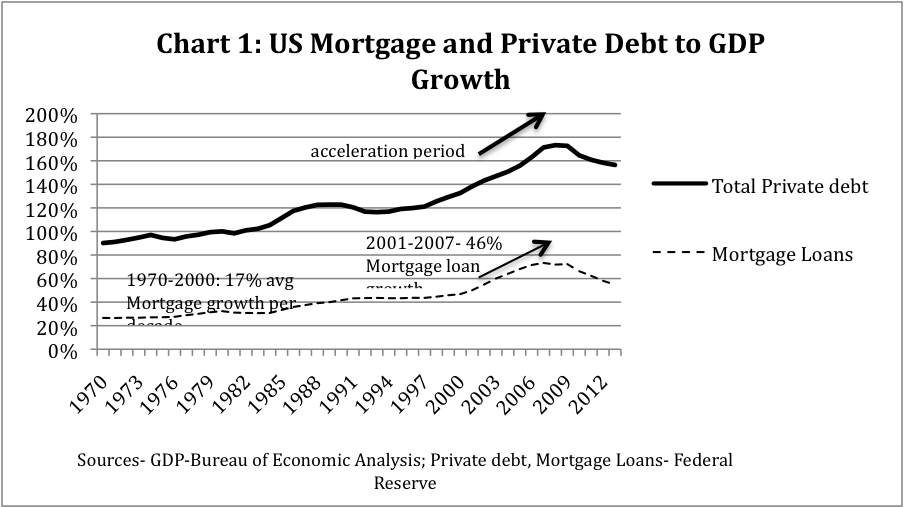 By contrast, in 2007, the federal government debt to GDP was slightly lower than it had been ten years before and didn’t accelerate until after the crisis. Benign growth in government debt is typical of the period preceding most significant financial crises.

As Chart 2 shows, from the sheer dollar amounts involved, it should be no surprise that private debt would be a primary driver of the economy. This chart shows the increase in key categories from 1997 to 2007—the decade preceding the crisis: From 1997 to 2007, lenders flooded the US economy with $14.4 trillion in net new private loans. Federal debt increased by a significantly smaller amount—$3.6 trillion—during that same period. An increase in bank loans represents the entry of additional money into the economy. For all the talk of the US government and the Federal Reserve Bank “printing money,” it is private lending that creates the most new money entering the economy. The primary constraint on that new money flooding the economy is the capital requirements imposed on those lenders. Anyone who has been granted a loan and had the proceeds of that loan deposited into his or her account has just witnessed the deposit of newly created money into the system. The idea that savings and deposit growth must precede loan growth and thus leads to loan growth is misguided. Instead, loans create money and are thus a part of what creates deposits.

For this reason, total loans are a more accurate gauge of the amount of money in an economy than the “money supply” (the sum of deposits and currency), which is in large part a by-product of that lending.

While US private debt to GDP growth is currently flat, as shown in Charts 3a and 3b (which I refer to as the “debt snapshot”), the crisis of 2008 came after the point where private loans to GDP had grown 20 percent in five years and total private loans to GDP exceeded 170 percent. We looked at the two other largest crises of the last generation to see if private debt played a part there as well: Japan’s crisis of 1991, which followed its “economic miracle” of the 1980s; and the Asian crisis of 1997, which followed the “Asian economic miracle” of the 1990s. As shown in Charts 4a and 4b, in the period from 1985 to 1990, Japan’s private debt to GDP increased by 28 percent and reached 213 percent of GDP. And in the five-year run-up to the Asian crisis of 1997, private loans to GDP for South Korea and Indonesia grew 29 percent and 43 percent, respectively, and in South Korea, private debt to GDP reached 170 percent. In fact, the government debt to GDP ratio sometimes improves in the “runaway lending” period and becomes something of a contraindicator. In Spain, before its recent crisis, government debt to GDP declined by 16 percentage points. The credit boom brings increased income to businesses and consumers, and one result is more tax revenues for the government. Most businesses and consumers feel good, even euphoric, about their financial situation during this runaway lending period. And governments start believing they have found the recipe for economic success, such that the talk is often of economic miracles. But it shouldn’t be, because the other economic shoe is now dangling and threatening to drop.

The ideal economic situation for growth in a given country and the world is to have less capacity (or supply) than demand coupled with low private debt. Instead, we have nearly the opposite situation in our time. In the first decade of the 2000s, the United States and Europe built far too much capacity, especially in housing, and incurred too much private debt. In the 1980s, Japan built far too much capacity, saddling its banks with too much private debt and too many bad loans. While all have been catching up to this capacity, none yet has less capacity than demand, and all still have high private debt. And now China, whose industrialization and urbanization long fueled global growth, has created its own overcapacity and private debt problem, building far too much capacity in many industrial and real estate projects with easy credit that fueled the most rapid buildup of private debt yet. So now the majority of the globe is in this less than desirable place. No major global economic player now has that pivotal combination of undercapacity and low private debt to fuel productive investment and help boost global growth.