Yves here. This post by Steven Horn about that shows the typical terms of an oil and gas rights lease for American Energy Partners buries the lead, in that Steve needs to give the context of how the lease came to be public before he turns to explaining how the lease rips off the party who signs it. Among other things, it requires the homeowner to have any mortgage made subordinate to the royalty agreement, something no lender will agree to. If the homeowner can’t get the subordination (a given), no royalties will be paid! As you’ll see, there are other “heads I win, tails you lose” terms in these agreement.

Elisabeth Radow, a New York-based attorney who examined a copy of the lease, told DeSmogBlog she believes the lease “has the effect of granting American Energy Partners the right to use the surface and subsurface to such a great extent that it takes away substantially all of the rights attributable to homeownership.”

Murray brought the suit against McClendon back in August 2013, alleging McClendon committed trademark and copyright infringement by using the “American Energy” moniker. Murray’s attorneys used the lease as an exhibit in a Motion to Compel Discovery, filed on September 8, over a year after Murray brought his initial lawsuit.

The case has ground to a slow halt as the two sides duke it out over discovery issues and related protective order issues, making a large swath of the court records available only to both sides’ attorneys and causing many other records to be heavily redacted.

Out of that dispute has come the American Energy Partners lease, published here for the first time.

As part of ongoing discovery-related legal battles, the McClendon legal team argued against handing over an unredacted copy of a sample lease requested by Murray Energy because — as it stated in a June 24 letter that is now part of the court record — Murray has yet to demonstrate the “leases are reasonably calculated to lead to the discovery of admissible evidence.”

In other words, they’re arguing that Murray’s team hasn’t shown how getting its hands on a sample lease has anything to do with the legal case it is making: that McClendon’s company had infringed upon its trademark and copyright.

In its September 8 Motion to Compel Discovery, the Murray team submitted that McClendon’s company — while arguing in court against providing a lease — had actually sent a lease packet to Murray Energy Corporation on June 5 via lease-buying company Purple Land Management. They attached the lease as an exhibit to the motion. 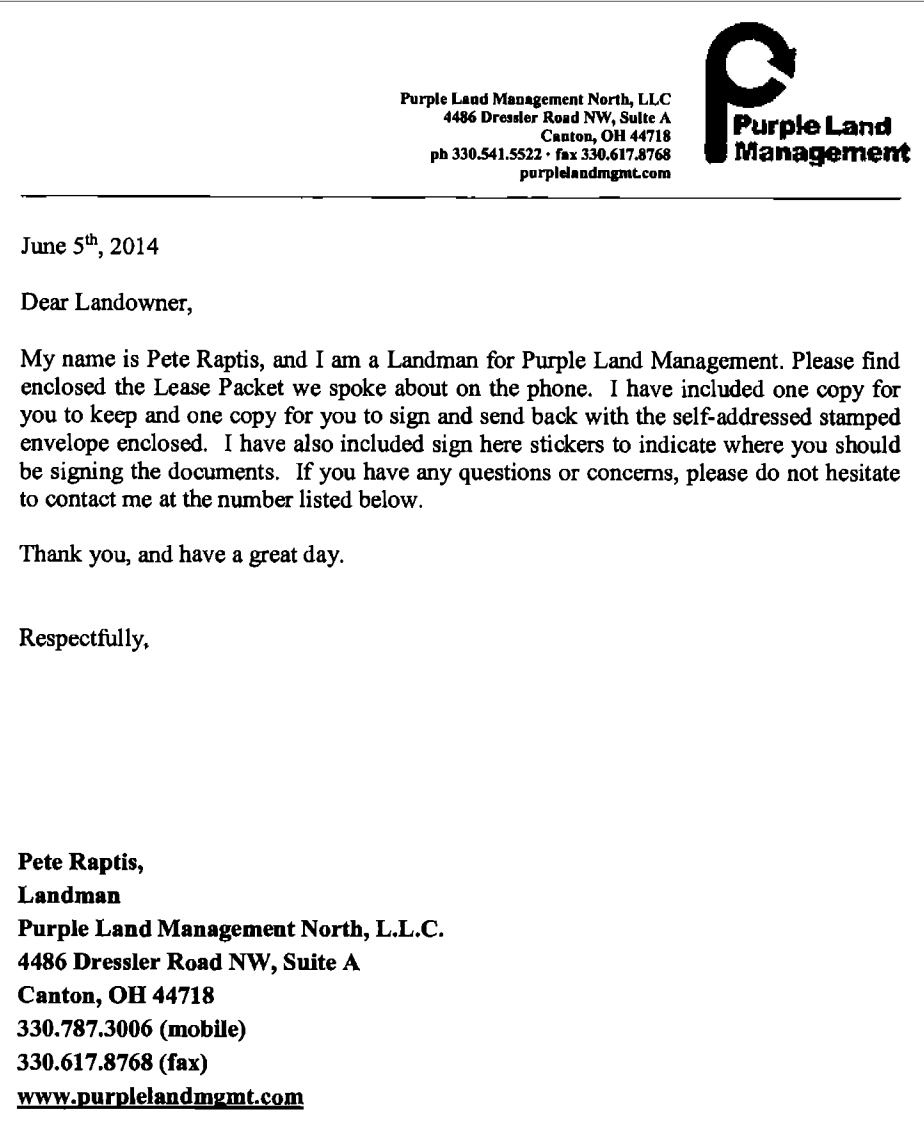 That lease doled out to Murray Energy Corporation set off legal alarm bells for the Murray legal team. Murray’s attorneys argue that the lease completely undermines the McClendon team’s discovery-related legal case, while also cutting straight to the heart of what their legal complaint centers around: McClendon’s use of the name “American Energy.” 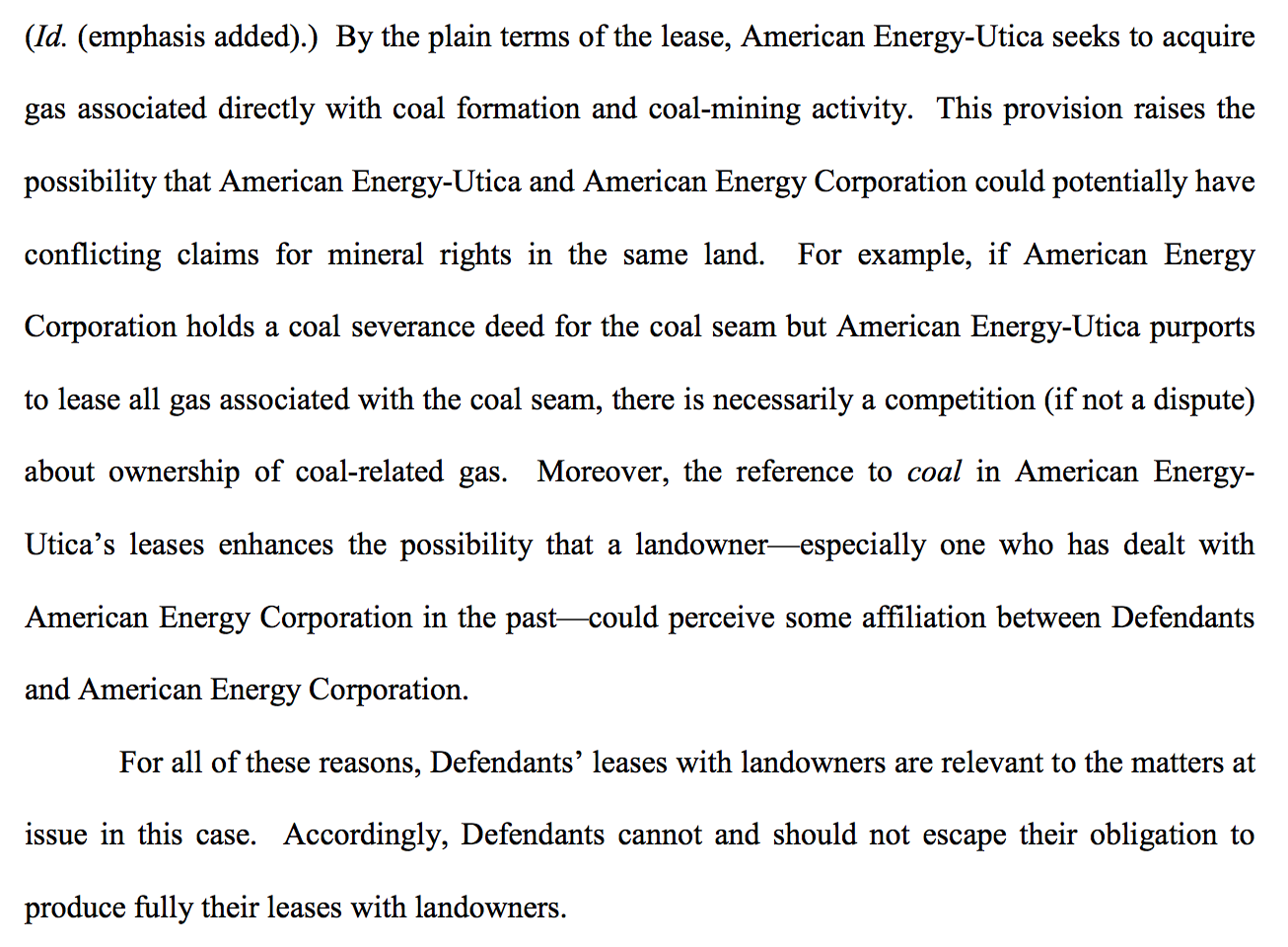 Murray’s legal team argued that the content of the American Energy Partners lease itself could cause “potential and actual confusion” about the “American Energy” name and which company is which. They pointed to numerous examples of such confusion both in the September 9 Motion to Compel Discovery, as well as in a more recent October 13 Motion in Opposition to the Protective Order and an accompanying exhibit. 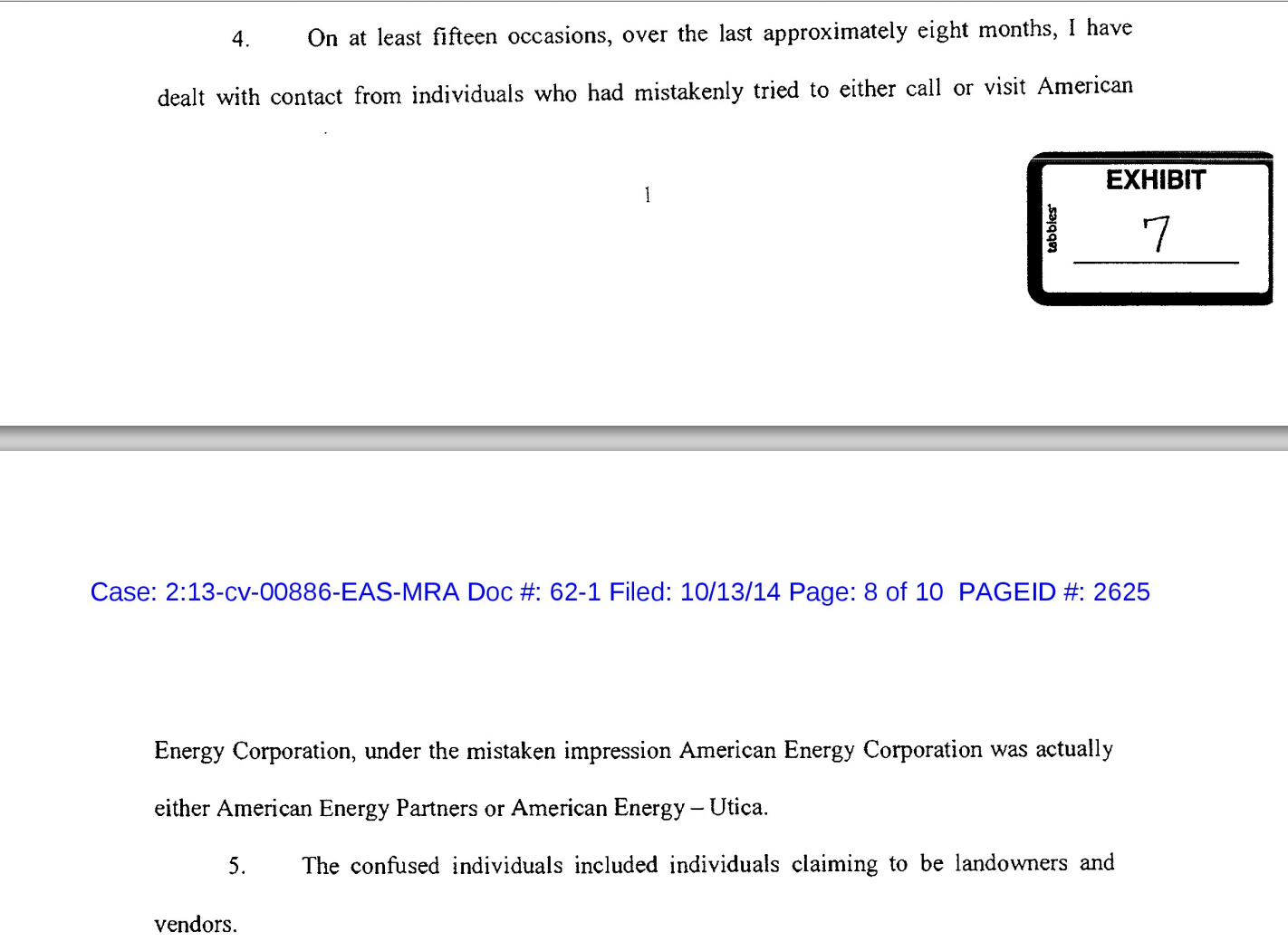 The American Energy Partners’ lease itself is 11 pages long and Radow — author of the article, “Homeowners and Gas Drilling Leases: Boon or Bust?,” published by the New York State Bar Association Journal — says it is more harmful to land-owners than an earlier lease doled out by Chesapeake Energy. Radow supplied DeSmogBlog with a copy of a Chesapeake Energy lease from December 2009 for sake of comparison. 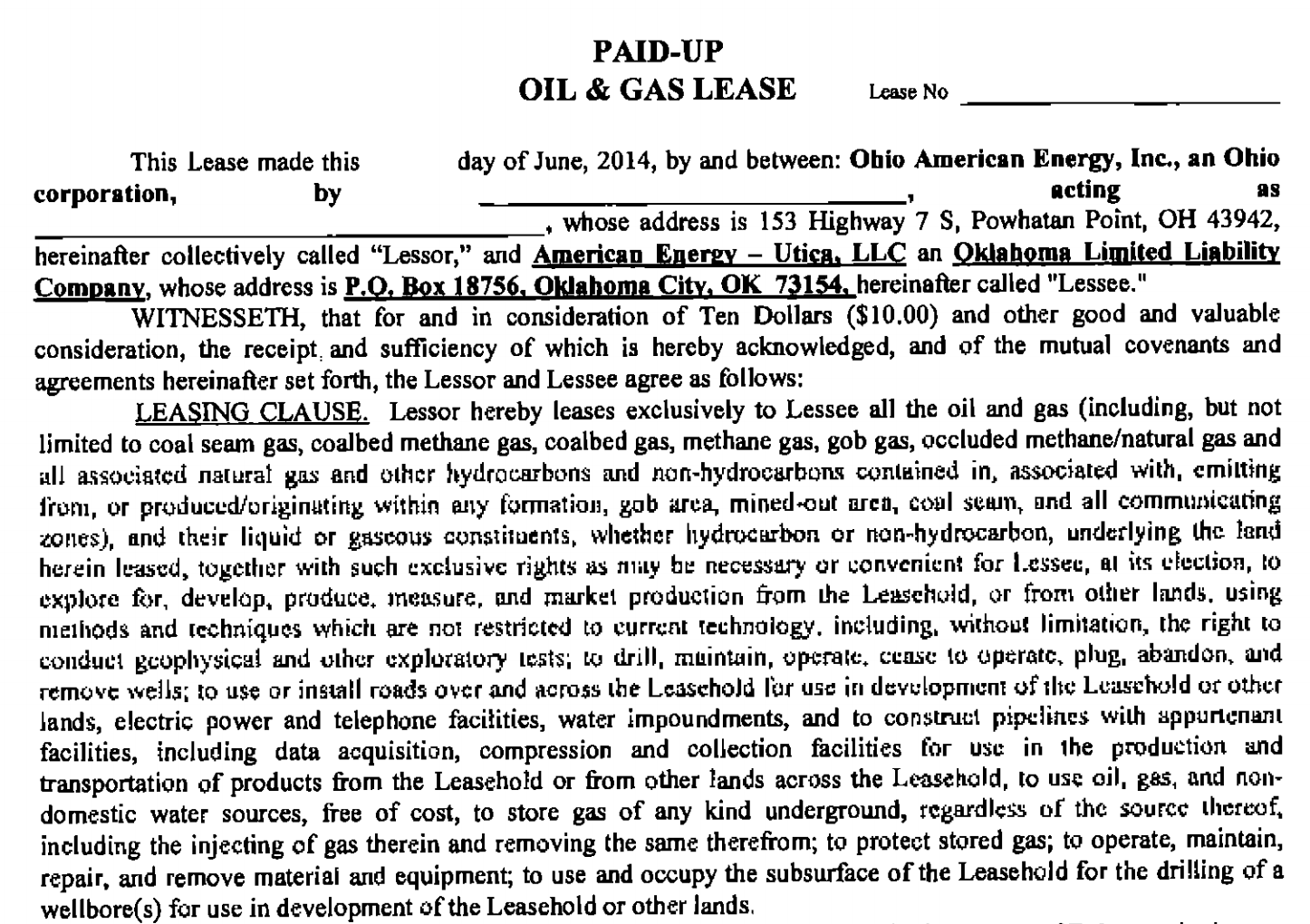 “One significant addition to this lease involves the right to suspend payment of royalties to a property owner with a prior mortgage until a subordination of mortgage is delivered in a form acceptable to American Energy obtained at the cost of the property owner,” Radow told DeSmogBlog via email.

“Educated mortgage lenders are well aware of the risks to their mortgage collateral associated with hydraulic fracturing and will be unlikely to subordinate their interests to the gas company. If they do refuse to deliver a subordination agreement, this clause gives the gas company a free pass on drilling a mortgaged property without paying royalties.”

“Once the lease term expires, if no drilling operations are in effect, American Energy has the unilateral right to extend the lease indefinitely to use the subsurface to inject waste,” explained Radow.

“One possible effect of this clause is to entitle American Energy to sign leases on properties with existing wells and only use that property for deep well injection of waste. Without fully understanding the ramifications to a drinking water supply of injecting toxic and radioactive waste below a person’s family residence, this unregulated practice could potentially transform a residence into a property unsuitable for habitation.”

Radow also cited the risk of earthquakes caused by fracking waste injection in Ohio — and beyond — and the loss of value that could impose upon a home.

“Homeowner’s insurance does not cover hydraulic fracturing operations and the lease has no provision for insurance,” commented Radow. “Even if the homeowner, at its expense, or American Energy, at its expense, were to purchase earthquake insurance endorsements to their existing coverage, it is not at all clear that the added insurance will cover manmade earthquakes.”

While the U.S. shale boom currently faces free fall mode with the global price of oil plummeting, McClendon’s company appears to be repeating the ways of its precursor, Chesapeake Energy, by going full-throttle into “land grab” mode.

Most recently, Bloomberg reported that sources say American Energy Partners may soon buy up Freeport McMoran’s acreage in California’s Monterey Shale, a basin whose oil-producing potential was downgraded by 96-percent by the U.S. Energy Information Agency in May 2014.

“Prices on $1.6 billion of speculative-grade bonds sold by the upstart exploration firm of former Chesapeake Energy Corp. chief Aubrey McClendon have plunged as much as 19 percent since being issued in July,” wrote Bloomberg.

In the history portion of its website, Chesapeake calls the period between 2003 and 2007 its “Executing the Land Rush Plan” phase.

“During this time, we rapidly increased our acreage positions in these unconventional plays as we won what we have called the ‘gas shale land grab,’” says the website. “We believed that by winning this land grab, we could establish Chesapeake as the premier U.S. natural gas producer for decades to come.”

“I can assure you that buying leases for x and selling them for 5x or 10x is a lot more profitable than trying to produce gas at $5 or $6 per million cubic feet,” he once said on an investor call.

An Exhibit found within court records from the Murray v. McClendon case shows American Energy Partners has posted newspaper advertisements reading “We are drillers, not land flippers!,” likely an attempt to differentiate the new start-up company from the past deeds of Chesapeake Energy.

Yet, the content of the American Energy Partners lease served to Murray Energy, the company’s current on-the-ground activity nationwide and McClendon’s Cheasapeake Energy “land grab” track-record tells another story: that of another land grab well in the making.