I never dreamed that a class I took in college, The Politics of Popular Education, which covered the nineteenth century in France and England, would prove to be germane in America. I didn’t have any particular interest in the topic; the reason for selecting the course was that the more serious students picked their classes based on the caliber of the instructor, and this professor, Kate Auspitz, got particularly high marks. The course framed both the policy fights and the broader debate over public education in terms of class, regional, and ideological interests.

The participants in these struggles were acutely aware that the struggle over schooling was to influence the future of society: what sort of citizens would these institutions help create?

As the post below on the march of school privatization in Wisconsin demonstrates, those concerns are remarkably absent from current debates. The training of children is simply another looting opportunity, like privatizing parking meters and roads. The objective is yet another transfer from some of the remaining members of the middle class, public school teachers, to the promoters. And this process also produces an important side benefit for socially unenlightened capitalists: that of slowly breaking one of the last influential unions.

And lest you had any doubt, despite the claim that charter schools help children, the evidence is that it doesn’t. Moreover, the pattern in capitalism American style is towards ever-greater crapification. So imagine what private schools, where the operators are on relatively good behavior because the project is still in its demonstration phase, look like in ten years.

Moreover, international comparisons show that higher teacher pay is strongly correlated with better educational outcomes, which should hardly seem surprising. Higher compensation, if nothing else, is a sign that society confers some stature to teachers, which helps in attracting capable people into that role. From a summary of a 2012 study:

Peter Dolton and Oscar Marcanero-Gutierrez, two economics professors at the University of London and University of Malga respectively, collected data from the Organization for Economic Cooperation and Development’s (OECD) annual Education at a Glance reports, the Programme for International Student Assessment (PISA) and Trends in International Mathematics and Science Study (TIMSS) to determine the relationship between pay and student achievement. They concluded that – guess what? – better teacher pay leads to teacher quality and that leads to improved student performance. 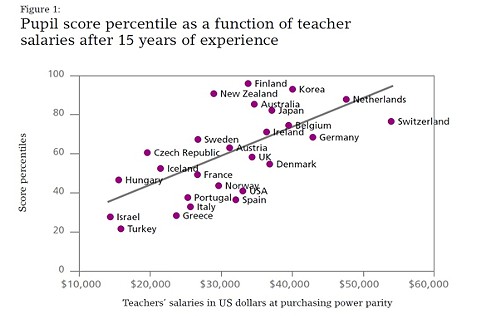 For a window on how school privatization is on the march, here’s an update from Wisconsin.

By Christopher Fons, a social studies teacher in the Milwaukee public school system

With the victory of Scott Walker and the Republican Party in Wisconsin this past election day – they increased their majorities in both the Assembly and Senate – the Milwaukee Public Schools have joined the “endangered species list” of public school districts in the United States.

Within the next few months the school privatization lobby and religious schools will draw up a plan that will for all intents and purposes end public education in one of the largest school districts in the United States. This will leave some of the poorest, and most incarcerated people (Wisconsin imprisons more black men than any other state) in the nation exposed to “market forces” when it comes to educating their children.

“Free choice” in the market will give Milwaukee students, the heirs to the Schlitz Brewing fortune as well as the children of the homeless, the choice to go to the best schools or to the most underfunded schools that primarily serve special education students, English language learners, chronically truant or behaviorally problematic students.

25 years ago the Bradley Foundation and a number of other right wing “free market” oriented think tanks convinced the Republican Governor Tommy Thompson, a majority of Republicans, “New Democrats” like Milwaukee Mayor John Norquist and a few Democratic Black Nationalist legislators like Polly Williams that it was time to help the poor of Milwaukee by allowing them to accept state money to attend private or charter schools instead of their neighborhood schools.

The Milwaukee Parental Choice Program initially allowed a few hundred low-income students to participate in the program. Today the program has expanded to over 28,000 students and the means test for getting a voucher is $78,000 if the student’s parents are married. The last Wisconsin budget also expanded the program state-wide and allows a tax deduction of $10,000 if your child goes to a private high school and a $4,000 deduction for an elementary school student.

An important fact to remember is that the private voucher and charter schools have shown no ability to improve student achievement. Even though this is the case year after year the plan has been expanded. This is because the program was never about giving students a better education. For the ideologues, it’s about destroying the public school “monopoly” and private players gaining access to the billions of dollars that is now captured by the public sector with its troublesome democratic school boards, organized workers and efficiencies of scale.

The incoming legislature is an extremely right wing group. They have already announced plans to expand the voucher program state-wide and pass an “accountability” bill that will convert “failing schools” into private schools or charters.

The accountability scheme was floated last year by a number of moderate Republicans in an effort to make more palatable the subsidy that religious and other fly by night charter schools are receiving on the tax payer dime. The idea is that if a school is doing poorly, as determined by standardized tests and a state-wide report card, then both private and public schools could be closed. The voucher lobby balked at this because they were concerned that a number of voucher schools would not be able to make the grade.

This year all bets are off as the Republican majority is emboldened by their perceived landslide nationally and by increased majorities in the Assembly and Senate.

The upshot then is that although the Milwaukee Parental Choice Plan has shown no improvement in student achievement, is more and more becoming a subsidy to the middle class and has created new levels of corruption as numerous schools have been proven to be criminal fronts, the neo-liberals in charge of our state are intent on destroying an institution, Milwaukee Public Schools, that is democratically controlled, creates thousands of family supporting jobs and serves the poorest, most disabled and newest immigrants to our country. All this in an effort to transfer billions to religious institutions that don’t pay taxes, educational consultants, dubious operators of fly-by-night charter schools, computer software and hardware companies and numerous other profit-seeking grifters that now will have little transparency and less accountability.

The question is: Will anyone notice?