Yves here. Even though this post hews to the convention of a describing the labor market conditions in Europe in clinical terms, the data reveals deeply troubling conditions, such as a high and in some countries rising level of families with no wage earner, which sets the stage for the continuation of poverty, as well as putting them in danger of becoming homeless. “Lost generation” is too kind a term to depict the conditions facing the young. Instead of being able to make choices and at least to a degree, shape their future, they are desperately trying to find a foothold of any kind.

By Olga Tschekassin, a research assistant at Bruegel. Originally published at Bruegel 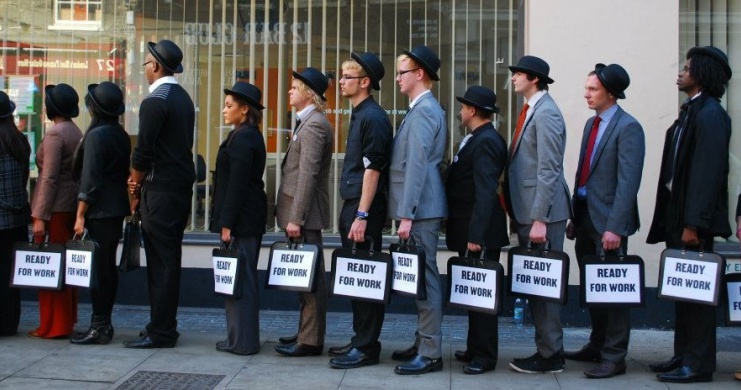 Since the beginning of the global financial crisis, social conditions have deteriorated in many European countries. The youth in particular have been affected by soaring unemployment rates that created an outcry for changes in labour market policies for the young in Europe.

Following this development, the Council of Europe signed a resolution in 2012 acknowledging the importance of this issue and asking for implementation of youth friendly policies in the Member States. Yet, almost 5.6 million young people were unemployed in 2013 in the European Union (EU) – in nine EU countries the youth unemployment rate more than doubled since the beginning of the crisis.

In this post we draw your attention to two more indicators reflecting the social situation of the young generation: the percentage of children living in jobless households and the percentage of young people that are neither in employment nor education nor training.

The indicator Children in jobless households measures the share of 0-17 year olds as a share of the total population in this age group, who are living in a household where no member is in employment, i.e. all members are either unemployed or inactive (Figure 1). 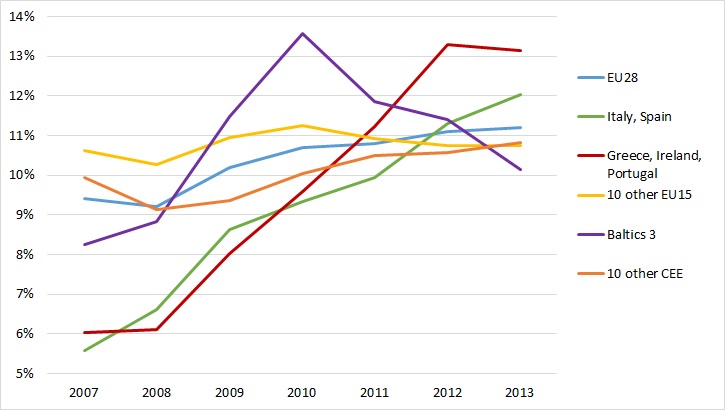 Country groups: 10 other EU15: Austria, Belgium, Denmark, Finland, France, Germany, Luxembourg, Netherlands, Sweden and United Kingdom; Baltics 3: Latvia, Lithuania, Estonia; 10 other CEE refers to the 10 member states that joined in the last decade, excluding the Baltics: Bulgaria Czech Republic, Croatia, Hungary, Poland, Romania, Slovenia, Slovakia, Cyprus and Malta; Sweden: data for 2007 and 2008 is not available, the indicator is therefore assumed to evolve in line with the other 9 EU15 countries.

Such approximation has only a marginal impact on the aggregate of the other EU15 countries, because children in jobless HH in Sweden represented only 3% of the country group in 2009. Countries in groupings are weighted by population.

In the EU28 countries this share rose only slightly over the past years to 11.2%. It is striking, however, that the ratio of children living in households where no one works more than doubled in the euro-area programme countries (Greece, Ireland, Portugal) as well as in Italy and Spain to 13% and 12%, respectively. And even more shocking – while the share stabilized in the programme countries, in Italy and Spain it is still sharply increasing. In Ireland in 2013 more than one in every six children lived in a household where no one worked. This is indeed an alarming development. Only the Baltics, which experienced a very deep recession as one of the first countries hit by the crisis, are reporting a sizable turning point in the statistic in 2010 and the share is presently continuing to decline. The numbers are, however, still well above pre-crisis levels.

A high share of children living in jobless household is not only problematic at the moment but can also have negative consequences for the young people’s future since it often means that a child may not only have a precarious income situation in a certain time period, but also that the household cannot make an adequate investment in quality education and training (see a paper on this issue written for the ECOFIN Council by Darvas and Wolff here). Therefore a child’s opportunities to participate in the labour market in the future are likely to be adversely affected. Moreover, as I discussed in a blog earlier this year, children under 18 years are more affected by absolute poverty than any other group in the EU and the generational divide is widening further.

Not in Education, Employment or Training (NEET)

The financial situation of young people between 18 and 24 years old who finished their education is less dependent on their parents income because they are usually enter the labour market and generate their own income. Therefore we are going to have a closer look on their work situation, i.e. how many young people have difficulties participating in the labour market.

Figure 2:  Not in Education, Employment or Training 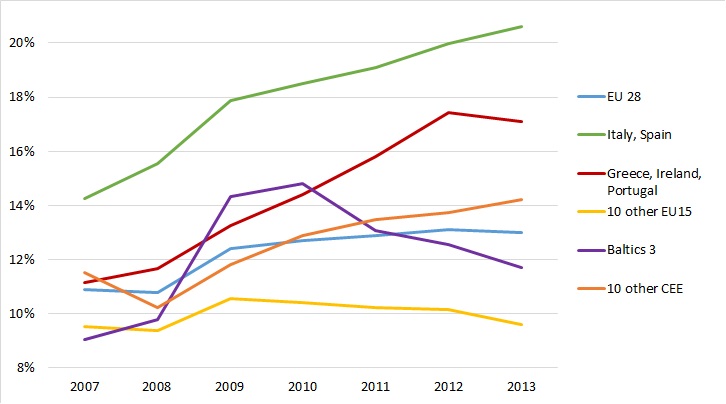 The NEET indicator measures the proportion of young people aged 18-24 years which are not in employment, education or training as a percentage of total population in the respective age group. We can see in Figure 2 that the situation among EU28 countries stabilized over the last four years.

The good news is that for the first time since 2007 we see a decline in the rate in the euro-area programme countries in 2013. This decline is, however, mostly driven by Ireland with an unchanged situation in Greece and Portugal. Also, in the Baltics the ratio is on a downward trend. More worrying, however, is the situation in Italy and Spain.

Among all EU28 countries, the young generation in Italy with 22.2% of all young people being without any employment, education or training, is disproportionately hit by the deterioration in the labour market. Every fifth young person between 18 and 24 is struggling to escape the exclusion trap. Europe and especially Italy is risking a lost generation more than ever.

Labour market policies for young people should therefore stand very high on the national agendas of Member States. The regulations introduced in summer 2013 into the Italian labour market reform which are setting economic incentives for employers to hire young people build an important step towards more labour market integration of the youth in Europe. Their effects are yet to be observed in the employment statistics in the coming years in Italy. More action on the national and European level is needed to improve the situation of the young.