I was going to write a much more detailed post on this year’s ObamaCare enrollment period (no, they still haven’t fixed the back end) but I ran across this piece from Jared Bernstein that was so egregious that I felt I had to post on it. The title is, I think, an example of economists’ humor; here it is: “A high-tech ‘event analysis’ of the Affordable Care Act.” This is the “high tech” part (I’ve helpfully highlighted the funny part in yellow): 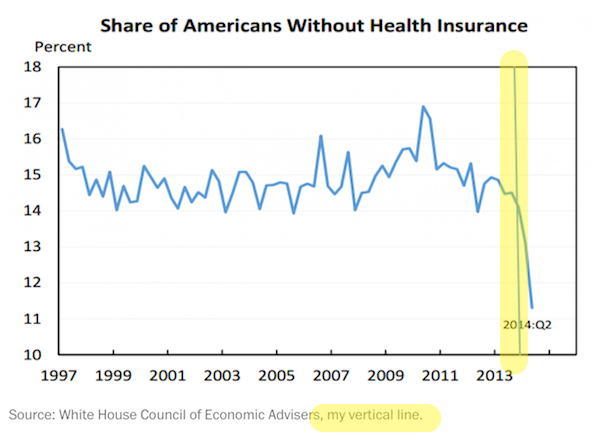 So the “event” is ObamaCare, and the share of Americans without (some form of) health insurance goes down. That’s the analysis.

It would be churlish of me to draw attention to the tricks Bernstein plays with the non-zero Y-axis, and the carefully selected X-axis, so I’ll go ahead and do just that. Here’s Time’s version of the same Council of Economic Advisors data: 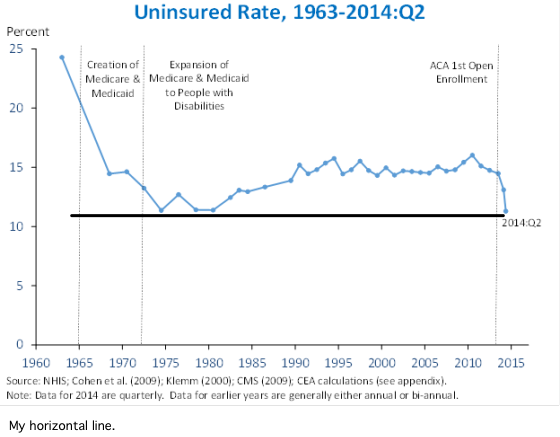 Granted, Democratic loyalists are shameless in their triumphalism, but doesn’t my horizontal line make ObamaCare’s achievement — bringing insurance coverage back to the level of the mid-70s, when the neo-liberal era began — look a wee bit less impressive?[1]

But let’s be fair; we all know Bernstein isn’t making a serious economic point, assuming that to be possible for him by now; he’s making the political point that it’s hard to take away perceived benefits from people once they’ve begun to receive them:

I post this not only to show that at least by this metric, Obamacare is proving to be highly effective, but to try to bring some desperately needed perspective to this idea that the law can or should be repealed. It is a very big and positive deal to go from being uninsured to having coverage, with far-reaching positive impacts on your health, financial security, and even your longevity.

Here, Bernstein commits the first fundamental fallacy of ObamaCare defenders and neo-liberals everywhere: He confuses health insurance with health care. In reality, the positive impact health comes, not because you write an insurance company a check, but because the health care system delivered services. And the second fundamental fallacy — let me drop a hint, for new readers, of where I’m going with this — is like it: He defines insurance always as private insurance, and never as social insurance. Going on:

So my guess is that not just for policy reasons, but for political reasons, any replacement will certainly have to meet this benchmark.

That is, any replacement that fails to sustain this trend, or worse, reverses it, should and probably will be unacceptable to the public.

Heaven forfend that we try to exceed the benchmark, eh? And now here comes the Big Lie:

With social insurance, the pool can be the entire country, so there’s no “thus” the first, and there’s no “thus” the second. (Or rather, there is only “thus” if, because markets, you rule out social insurance, and confuse health insurance with health care.) Bernstein appeals to seemingly self-evident neoliberal truths in the same way that Clinton appealed to “evidence-based policy”: Tendentiously and dishonestly, to take single payer off the table without actually mentioning it:

The key point to remember in all discussions of ObamaCare is that neither it, nor indeed the entire private health insurance “industry,” should exist. They are rent-seeking parasites, economic tapeworms. One does not improve a tapeworm; one removes it.

To understand this simple point, all we need to do is look north to Canada, where we see a single payer system — they call it “Medicare” — delivering equal or better health outcomes at dramatically lower cost, without a health insurance industry, and without ObamaCare’s bizarre, mystifying, and above all unfair Rube Goldberg-esque complexity. In fact, if we’d passed HR 676 in 2009, we would have saved hundreds of billions of dollars by now (more than enough to cover everyone) and thousands of lives, though ObamaCare apologists don’t like to talk much about the excess deaths that ObamaCare’s achingly slow rollout caused and is still causing.

To put this another way, since the mid-70s, when Canada adopted its single payer system, we’ve conducted the largest controlled experiment in the history of the world. We’ve had two political systems spanning the same continent, both nations of immigrants and once part of the British empire, both mainly English-speaking but multicultural, both with Federal systems, and both with a free market system backed by social insurance. And the results of the experiment? The “evidence”? Canadian-style single payer wins hands-down.

Of course, it’s obvious what Bernstein why Bernstein makes this political point now; he’s running interference for the administration in case King v. Burwell goes against them, and citizens in the 34 states that use the Federal ObamaCare exchange lose their subsidies. To show you the sort of column Bernstein might have written, let’s look at what they’re doing at the other end of the Overton Window, from Yuval Levin and James C. Capretta on The Wall Street Journal editorial page:

If the court rules today’s subsidies illegal, those state officials could face a choice between creating a state exchange (and so reinforcing ObamaCare) or seeing some residents lose coverage they now have. ObamaCare’s opponents in Congress should give them a third option: a viable alternative to the Affordable Care Act.

The first step is to introduce legislation that would allow any state to opt out of all of ObamaCare’s mandates, regulations, taxes and requirements, and instead opt into a far simpler and more flexible alternative system. In that system, state residents not offered health coverage by their employers could receive a federally funded, age-based credit for the purchase of any state-approved health-insurance product…

Now, if Bernstein were a principled and progressive creative thinker, instead of a Democratic waterboy with a stultified neo-liberal mentality, he’d be thinking of King v. Burwell as an opportunity to create a “a viable alternative” to ObamaCare, but from the left. I mean, seriously: What do Levin and Capretta give the Blue States? Take what Levin and Capretta wrote as a baseline and revise it:

If the court rules today’s subsidies illegal, those state officials could face a choice between creating a state exchange (and so reinforcing ObamaCare) or seeing some residents lose coverage they now have. Progressives in Congress should give them a third option: a viable alternative to the Affordable Care Act.

The first step is to introduce legislation that would allow any state to opt out of all of ObamaCare’s mandates, regulations, taxes and requirements, and instead opt into a far simpler and more flexible alternative system. In that system, the age for Medicare eligibility would be set at birth.

(Pause to note that: 1) The “Medicare” proposal above is for effect, though Edward Kennedy advocated for progressive lowering of Medicare eligibility before Obama conned him; it probably would make more sense to implement either the Sanders or Conyers single payer bills for those states; 2) I know that Medicare has a neoliberal infestation all its own, and that would have to be dealt with; 3) the idea of regional single payer interstate compacts might also have appeal; for example, New York, Massachusetts, Vermont, and Maine, New Hampshire living free, and dying.

See the difference? How about we give people “a viable alternative” that’s simple, rugged, proven, and cheaper, and that covers everybody, saving thousands of lives and a boatload of money? Why not raise the baseline?

So let me close with a little joke of my own:

I’ve drawn a “low-tech” black censor bar (my “horizontal line”) across Bernstein’s eyes. Perhaps he is merely appallingly ignorant, in which case the black bar symbolizes how he can’t see what’s right in front of him[3]. Or perhaps he is deliberately obfuscatory, in which case I’ve done him a real favor by anonymizing him, and I suggest the Post do likewise, using this handy image as a design comp. Jeff? Yo, Jeff!

[2] I suppose a logic chopper could argue that single payer is not a reform; I’d argue that it is. First, provision of the delivery of health care is left in private hands; something like nationalizing delivery, a la the UK’s NHS before its neoliberal infestation, would be far more radical. Second, expanding the application of proven programs, like Medicare, to greater populations is the very essence of reform; ObamaCare, which mandates the purchase of a defective product (private health insurance) is far more radical.

[3] Or, to be fair, a few hundred miles north of him. Perhaps the real problem is that Canada is not on the Acela, and so Beltway apparatchiks like Bernstein don’t know it exists?