By Lutz Kilian, Professor of Economics, University of Michigan; and Research Fellow at CEPR. Originally published at VoxEU.

Only a few years ago, many observers expected a steadily growing global shortage of crude oil. This shortage did not materialise in part because of the rapidly growing production of shale oil in the US. The production of shale oil (also referred to as tight oil) exploits technological advances in drilling. It involves horizontal drilling and the hydraulic fracturing (or fracking) of underground rock formations containing deposits of crude oil that are trapped within the rock. This process is used to extract crude oil that would have been impossible to release by conventional drilling methods designed for extracting oil from permeable rock formations. Shale oil production relies on the availability of suitable drilling rigs and skilled labour, which is one of the reasons why the US shale oil boom so far has been difficult to replicate in other countries.

US shale oil production has grown from about 0.4 million barrels a day in 2007 to more than 4 million barrels a day in 2014. This expansion was stimulated by the high price of crude oil after 2003, which made the application of these new drilling technologies cost competitive. The expansion of US shale oil production soon captured the imagination of policymakers and industry analysts. By 2012, the International Energy Agency projected that the US would become the world’s leading crude oil producer, overtaking Saudi Arabia by the mid-2020s and evolving into a net oil exporter by 2030 (International Energy Agency 2012). Pundits envisioned the US becoming independent of oil imports, net oil exports financing the US non-oil trade deficit, and consumers enjoying an era of cheap gasoline with a resulting rebirth of US manufacturing. My recent research, however, suggests that these visions remain far removed from reality (Kilian 2014).

Uncertainty About the US Shale Oil Boom

To gauge the importance of shale oil for the US economy it is useful to bear in mind that, as of March 2014, shale oil accounted for almost half of US oil production, but only about a quarter of the total quantity of oil used by the US economy. This magnitude is far from negligible, but to understand the excitement about shale oil one has to consider projections of future US shale oil production.

Publicly available projections of future shale oil production have to be interpreted with some caution.

Sustained production requires ongoing investment. Projections by the US Energy Information Administration suggest that even under favourable conditions US shale oil production will peak by 2020 (at a level commensurate with US oil production in 1970) and then decline. Moreover, even the peak level would be far below what is needed to satisfy US oil demand.

In the summer of 2014, for example, the Energy Information Administration was forced to lower its previous estimates of the stock of recoverable shale oil by 64%.

In short, there is considerable uncertainty about the persistence and scope of the US shale oil boom, and there are many reasons to be skeptical of the notion that the US will soon (or indeed ever) become independent of oil imports.

Even more importantly, the shale oil debate has largely ignored the fact that shale oil is not a perfect substitute for conventional crude oil, making comparisons across countries difficult. The quality of crude oil can be characterised mainly along two dimensions. One is the oil’s density (ranging from light to heavy) and is typically measured based on the American Petroleum Institute (API) gravity formula; the other is its sulphur content (with sweet referring to low-sulphur content and sour to high-sulphur content). Figure 1 provides an overview of how commonly quoted crude oil benchmarks (including West Texas Intermediate (WTI) and Brent oil in the North Sea) can be characterised along these dimensions. Shale oil consists of light sweet crude (at most 45 API), ultra-light sweet crude (about 47 API), and condensates (as high as 60API). Thus, not all shale oil is a good substitute for conventional light sweet crude oil such as the WTI or Brent benchmarks, and an aggregate analysis of the crude oil market tends to be misleading. In reality, the impact of shale has been far more complicated. 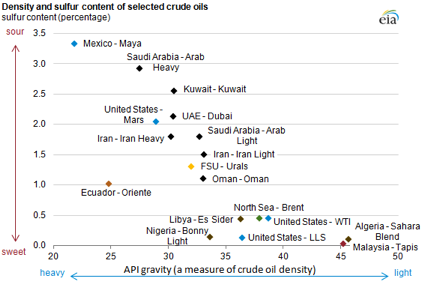 The US shale oil boom was preceded by a persistent and growing shortage of light sweet crude oil in world markets. US refiners responded to this trend by expanding their capacity to process heavy crudes that remained in abundant supply, becoming the world leader in this field. They were therefore taken by surprise when the US market was inundated with shale crude oil from the centre of the country after 2010. Not only was much of the refining structure ill-equipped to process this light sweet crude oil, but it proved difficult to ship the shale oil to those refineries on the coasts that would have been able to process it. With the development of shale oil in the interior of the country, large parts of the US oil pipeline infrastructure developed over the preceding 40 years had suddenly become obsolete, and rail and barge transport could not cope with increased demand. Moreover, exports of US shale oil that cannot be processed domestically were (and continue to be) prohibited by US law.

The resulting local excess supply of light sweet crude oil in the central US caused the WTI price of oil to fall below the Brent price. This discrepancy between domestic and global oil prices resulted from a breakdown of arbitrage between domestic and imported light sweet crude oil. There are signs that the US refining industry is gradually responding to these price differentials. Reconfiguring the US refining and transportation infrastructure, however, is a costly and slow process. For the time being, therefore, the evolution of the US price of oil is inextricably tied to improvements in the US refining, pipeline, and rail infrastructure.

In sharp contrast, US retail fuel prices have remained integrated with the world market in part because US refined products such as gasoline or diesel (unlike domestically produced crude oil) may be exported freely. As a result, the widely noted decline in US domestic oil prices relative to international benchmarks such as Brent, has not been passed on to the consumer in the interior of the country. This point is important because it removes the basis for any notion of a rebirth of US manufacturing on the basis of low-cost US gasoline and diesel fuel.

The Beneficiaries of the US Shale Oil Boom

Thus, the main beneficiary of the US shale oil revolution has been not gasoline consumers or, for that matter, domestic shale oil producers, but the US refining industry, which enjoys a competitive advantage compared to diesel and gasoline producers abroad because of its access to low-cost crude oil. In fact, refiners have every incentive to preserve the status quo and to prevent a lifting of the US ban on exports of domestically produced crude oil. An additional beneficiary of the shale oil revolution has been the transportation sector, notably the railroad industry, and the industries directly serving the oil sector. In contrast, the macroeconomic effects on real output and employment have been small, given the negligible share of the shale oil sector in the US economy. It is fair to say that there is no support for the notion that shale oil has been a game changer for the US economy. One area in which the shale oil revolution has made a difference is in reducing crude oil imports on the one hand, and increasing exports of refined products on the other, thus improving the US trade balance (and as a side-effect dampening the effect of foreign oil price shocks on the US economy). Of course, these improvements are small compared with the overall US trade deficit.

The (Lack of) Impact on the Global Price of Oil

It may seem that the rapid decline in the global price of oil after mid-2014 may be attributable to sharp increases in US shale oil production, providing direct evidence of the impact of the US shale oil revolution on oil prices after all. Although shale oil is not being exported, it replaces US crude oil imports, reducing the demand for oil in global markets, as do US exports of refined products. Some observers have gone as far as suggesting that shale oil may have become a victim of its own success in that it caused a sharp drop in global oil prices. There is no credible support for this interpretation. Similar price declines also occurred in other industrial commodity markets at the same time, suggesting that the cause of the oil price decline has not been specific to the oil sector, but that it mainly reflects a weakening global economy in Asia as well as Europe, possibly amplified by the decision of many oil producers to preserve oil revenues by increasing oil production in response to falling oil prices. This view is also consistent with the comparatively small magnitude of US shale oil production on a global scale.