“As she prepares a run for president, Clinton isn’t talking about free-trade agreements opposed by organized labor, tougher Wall Street regulation demanded by her party’s populist wing, or the wisdom of using tax reform to address income inequality” [Bloomberg].

Rubio, Paul, and Cruz to declare in early April [Politico].

Bush on declaring: “I’m joyfully pursuing the possibility of this and I will decide at some point, and then I’ll go at it” [Boston Herald]. “Joyfully considering…”

How Jebbie butchered Medicaid as Florida governor [Bloomberg]. “What makes [the] numbers interesting isn’t just that they trail most other states. In many cases, they also trail the Medicaid program that Bush wanted to replace.” The moral is that you can’t apply market solutions in a lemon market, as ObamaCare will discover over time.

Walker’s sons skipping college this year to campaign with him [AP]. I guess that means Walker’s going to announce at some point.

Huckabee raising money with an Internet infomercial for a “dubious” diabetes treatment [New York Times]. And “one ad arriving in January in the inboxes of Huckabee supporters, who signed up for his political commentaries at MikeHuckabee.com, claims there is a miracle cure for cancer hidden in the Bible.” Alrighty then.

Say, what happened to that Jindal guy, anyway? [WaPo].

“The Obama economy is a disaster, Obamacare is a train wreck and the Obama-Clinton foreign policy of leading from behind — the whole world is on fire,” Cruz said.

“The world is on fire?” the girl, later identified as Julia, asked the Texas Republican, according to the Concord (N.H.) Monitor.

“But you know what?” Cruz continued. “Your mommy’s here and everyone’s here to make sure that the world you grow up in is even better.”

Eeeeew. That said, on the “world is on fire” thing; I wouldn’t have pegged Cruz as accepting the reality of climate change, but whatever.

Gallup: For the first time since 1992, neither major party has an approval rating of 40 percent or higher [Bloomberg].

ISIL is direct outgrowth of Al-Qaida  in Iraq which grew out of our invasion which is an example of unintended consequences which is why we should generally aim before we shoot.

Which we totally did in Libya, Syria, Ukraine…

“The service would have about 25 channels, anchored by broadcasters such as ABC, CBS and Fox” [Wall Street Journal, “Apple Plans Web TV Service in Fall”].

Housing starts, Feburary 2015: “Housing starts unexpectedly fell sharply in February,” below consensus [Bloomberg]. Down everywhere, not just the Northeast (down a “whopping” 56.6%). So, “sluggish,” though permits are up.

No time in Rahm’s schedule for a forum on LGBT issues [Windy City Media].

“There are now 120 known and documented cases of [Chicago Police Commander Jon Burge] related torture of African American men, at least 19 Burge torture victims still remain in prison, Burge continues to collect his police pension, as do all of his confederates, and the City, County and State have expended at least $125 million in settlements, legal fees, and police pensions in the scandal” [HuffPo]. Seems odd this isn’t an issue in the mayoral race, especially if Garcia wants black votes. What am I missing?

Why agent provocateurs could be committing a Federal crime [KeeganNYC]. Case study Project Veritas and “Laura Lewis” in an Eric Garner protest for #BlackLivesMatter.

“Many Richmonders let out a collective groan of disgust upon learning of a local group’s plan to install a Confederate flag just off Interstate 95 in Richmond” [Richmond Style Weekly].

“[H]ospitals can improve their bottom line and their reputation by focusing more on hospitality than health care — offering organic food by a celebrity chef rather than lowering medication errors, for example” [New York Times].

“34% of those who are aware of the surveillance programs (30% of all adults) have taken at least one step to hide or shield their information from the government” [Pew Research].

“The biggest problem with real names isn’t about what kind of consistent identity you use. It’s about the imbalance of power involved with sharing that information” [MindSpillage].

“The very last thing I needed was my watch, TV, or car whining at me about my choices” [Another Word for It]. In Links today, but nothing wrong with hitting this twice.

“[W]earables need to be worn. In other words, having all of the pieces that work together is a second order problem; you have to first get the actual wearable on the wrist” [Stratechery]. Actually, there’s a proven, communications-enabled wearable technology in use today: We call it “the ankle bracelet.”

“A bevy of multibillion-dollar funds have gained as much as 9% this year as their managers bet against the euro” [Wall Street Journal].

“Family capitalism has experienced a renaissance.  Even giant firms are now often controlled by their owners the way Andrew Carnegie once captained his steel works or Henry Ford his car company” [TomDispatch].

Iggy Pop lectures on “free music in a capitalist society” at the BBC [Open Culture (recording)].

Readers, feel free to contact me with (a) links, and even better (b) sources I should curate regularly, and (c) to find out how to send me images of plants. Vegetables are fine! Fungi are deemed to be honorary plants! See the previous Water Cooler (with plant) here. And here’s today’s plant, the second of “I Wish It Were Spring!” week (MR): 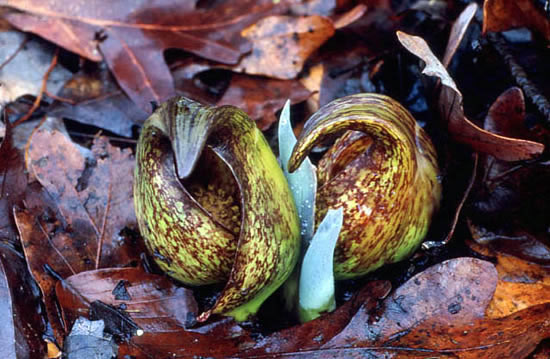 Skunk cabbage, in honor of the Skunk Party!