Yves here. The Fed’s eagerness to start increasing interest rates was given new impetus by last week’s strong job reports…which seem to have gotten perilous little in the way of critical scrutiny. Reader Scott is an exception:

So you know based on the earnings and the hours that the jobs that were added were lousy, that confirmed by 23% of them being Leisure and Hospitality, 66,000 jobs, of which 58,700 were restaurants and bars. Somebody said that the bottom 80% of earners saw flat wages, but I haven’t been able to figure out how they got to that number; I’m trying to do so.

The analysis below explains the longer-term data does not justify a rate increase either. So why is the central bank touting the idea? Is it simply to talk froth out of the market? Is it because they don’t like being in the ZIPR corner they’ve painted themselves into and feel no time is a good time, so they might as well start inching out?

I am at a complete loss as to why the Federal Reserve might think that now is the moment to begin raising  interest rates.  I cannot see a scintilla of hard evidence in support, and potent evidence against.

Here is the last 65 years of consumer inflation YoY: 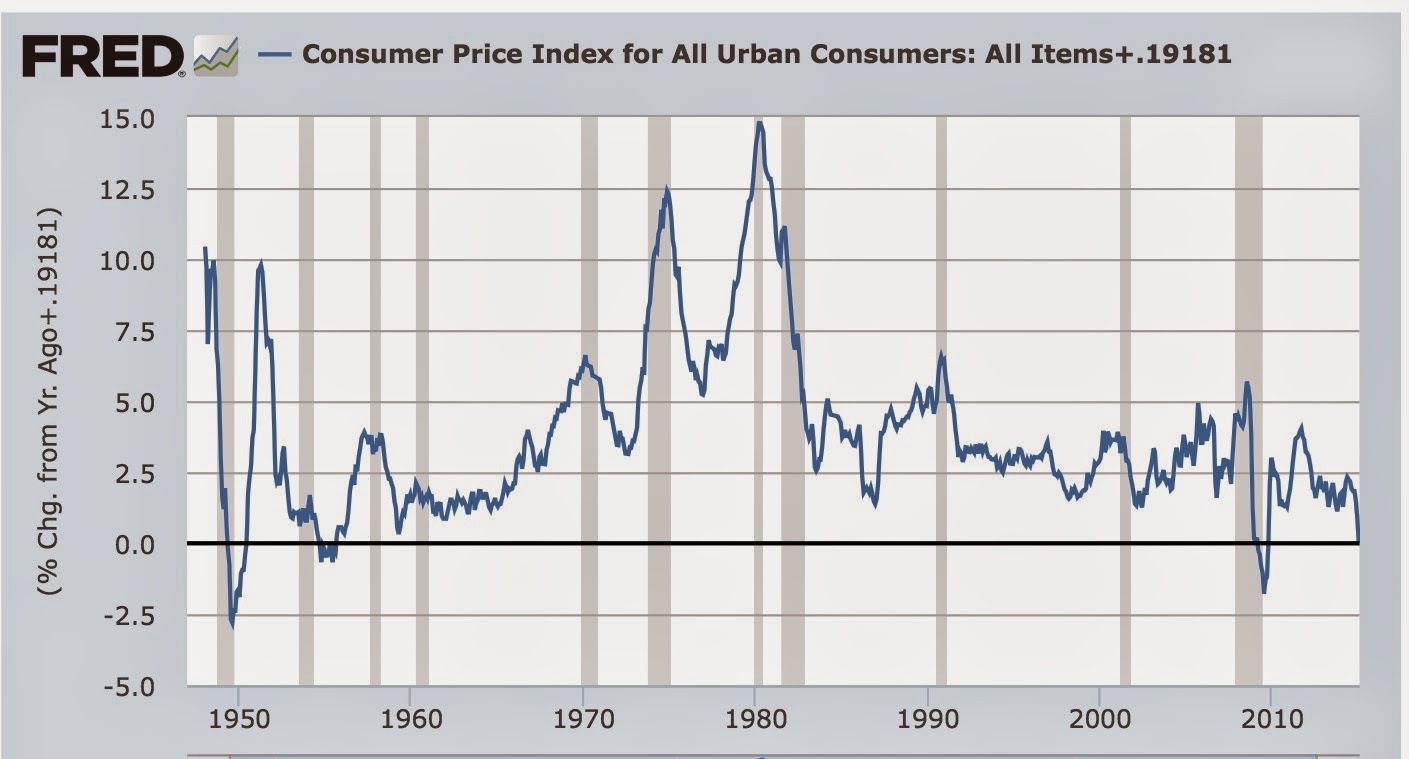 In that entire time, the only occasions on which there was less inflationary pressure than there is now is immediately after the 1950, 1952, and Great Recessions.

The situation is even more compelling when we look at the rolling 3 month average of consumer prices:

In the last half a century, there have only been 2 three-month periods, from November 2011 through February 2012, when there was less inflation than there is now.

And it’s not likely, based on your own core measure, that  we will see much inflationary pressure in the next 12 months. Because as you well know, just as core inflation tends to predict the direction of all prices in the next 24 to 36 months, so it takes 12 months or so for current gas prices to feed through into the rest of the economy: 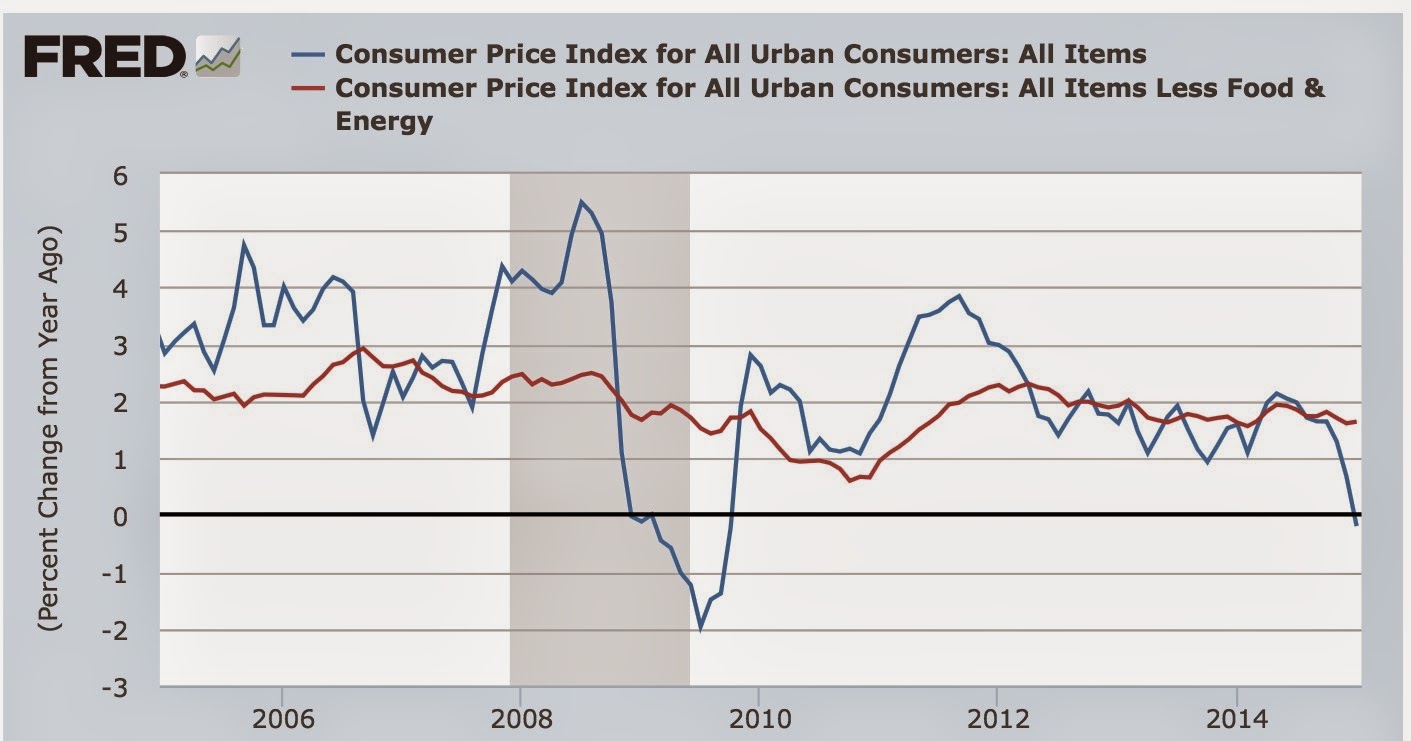 In other words, it is likely that the core inflation reading is going to move lower for the rest of 2015. 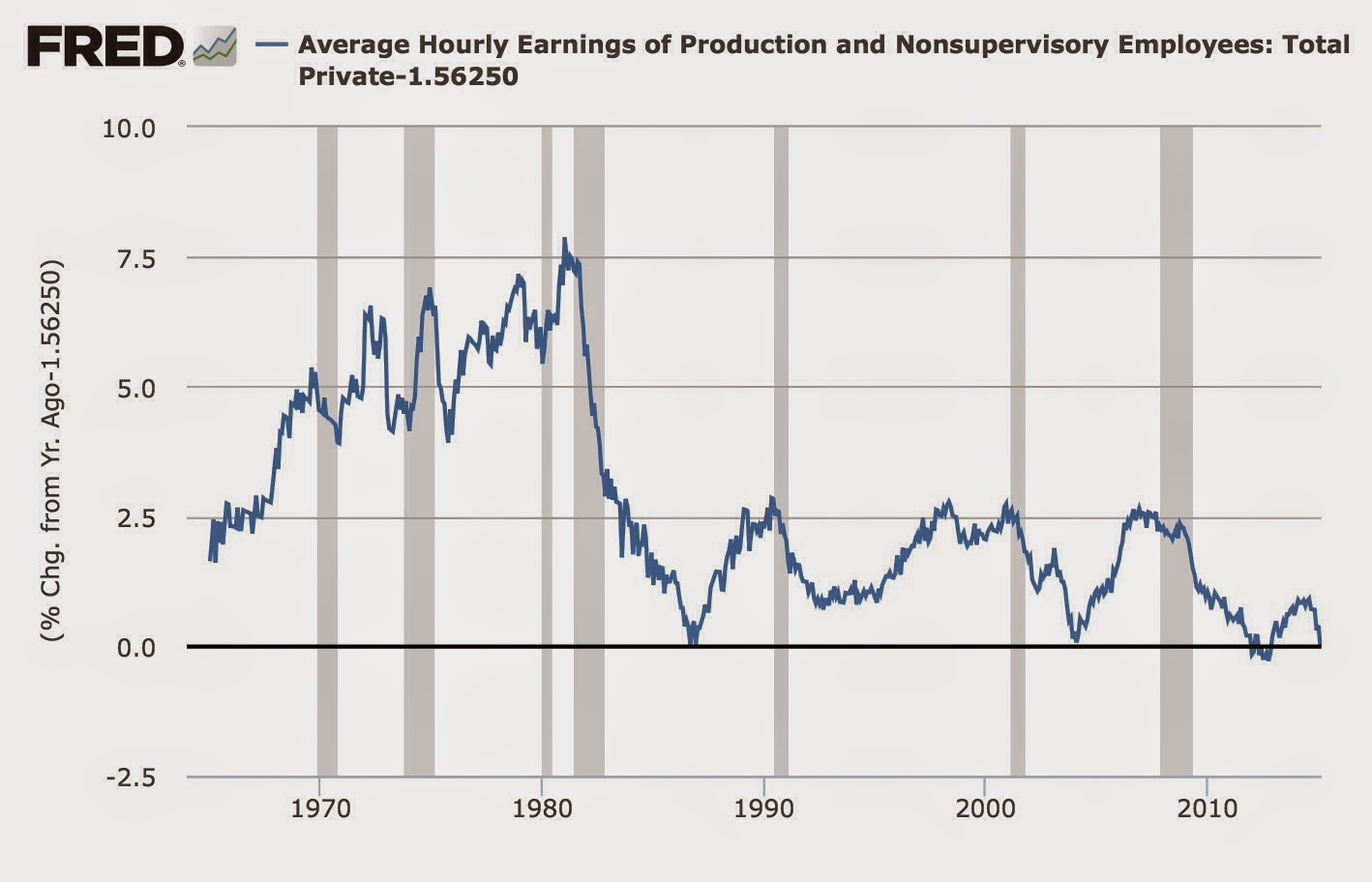 I realize that the unemployment rate just fell to 5.5%, and you think that inflationary pressures might start to build as unemployment falls to 5%.

But your own staff has just published a paper indicating that the percentage of long-term unemployed (i.e., people unemployed 27 months or more) is an independent factor in calculating when wage pressure might begin to build.  And here’s what that looks like now: 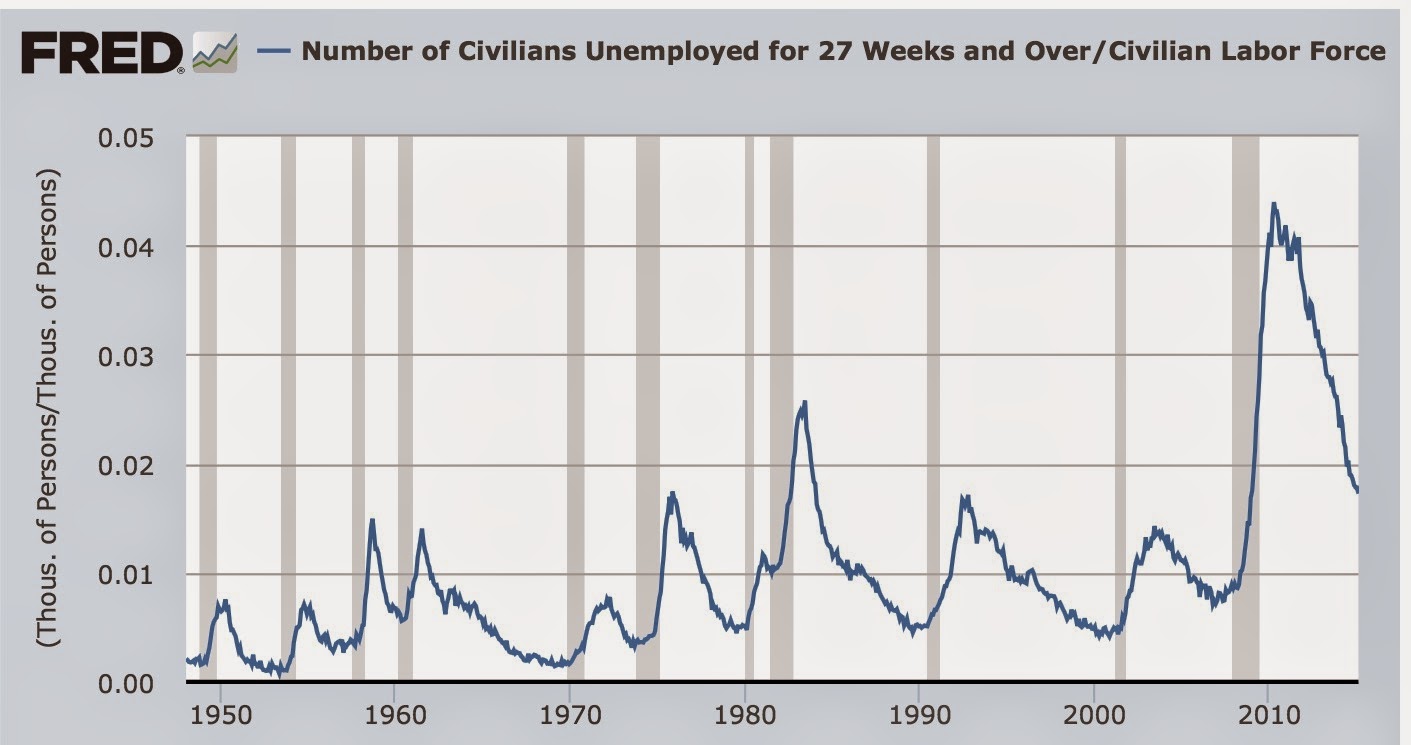 Higher than at any point in the last half century with the exception of the last few years, and coming out of the 1981-82 recession. 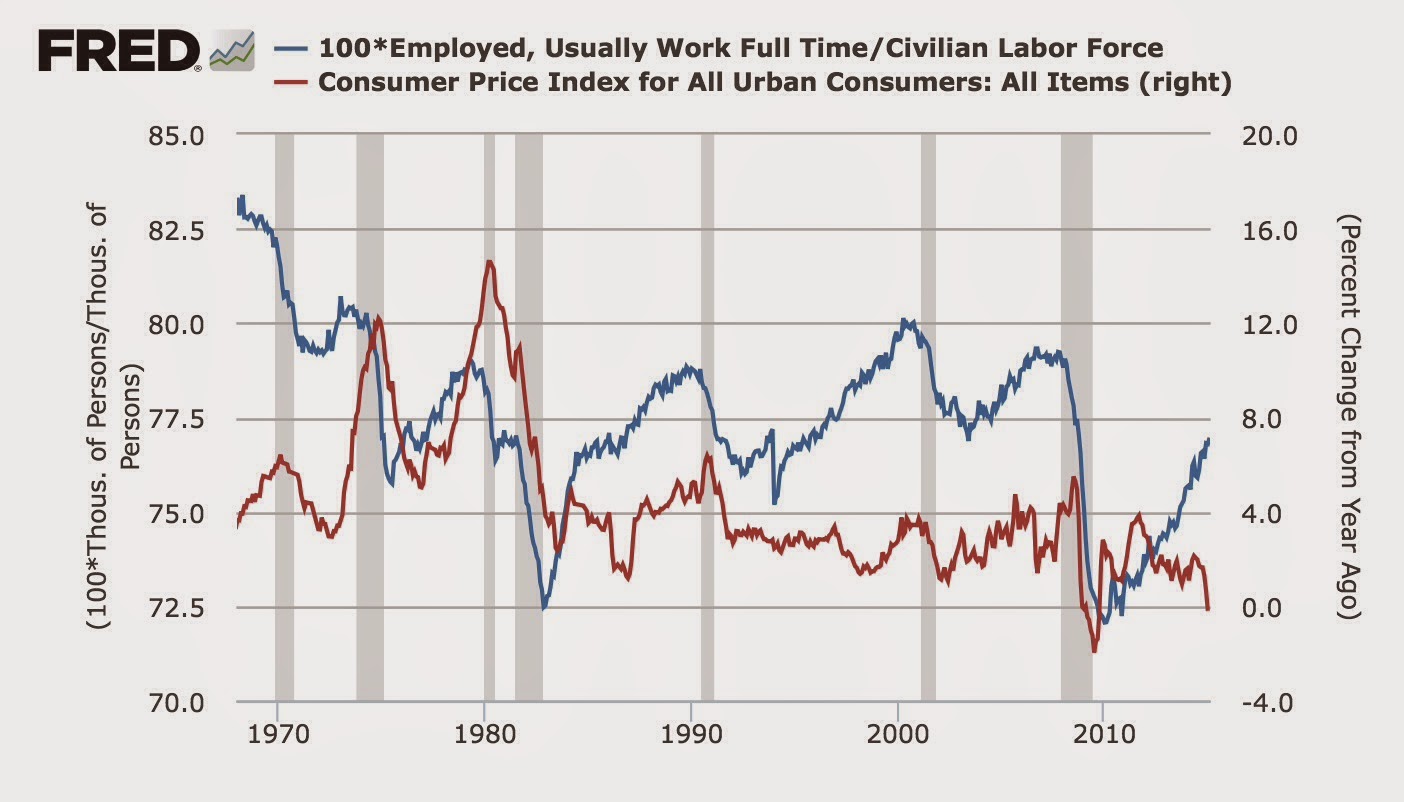 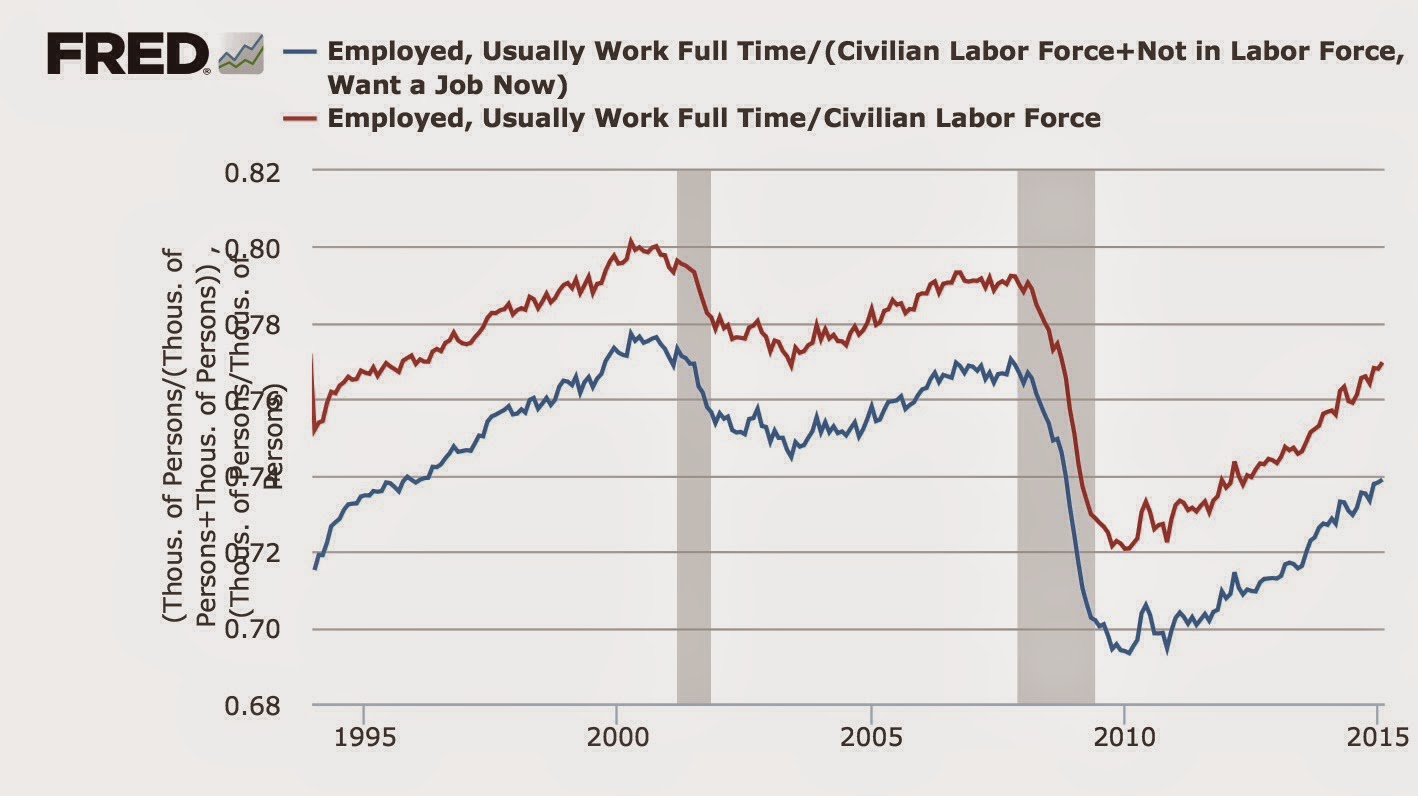 Finally, just consider the historical record, limited as it is, of when the Federal Reserve has raised interest rates in the present of out-and-out deflation.

This has happened only once since World War 2: 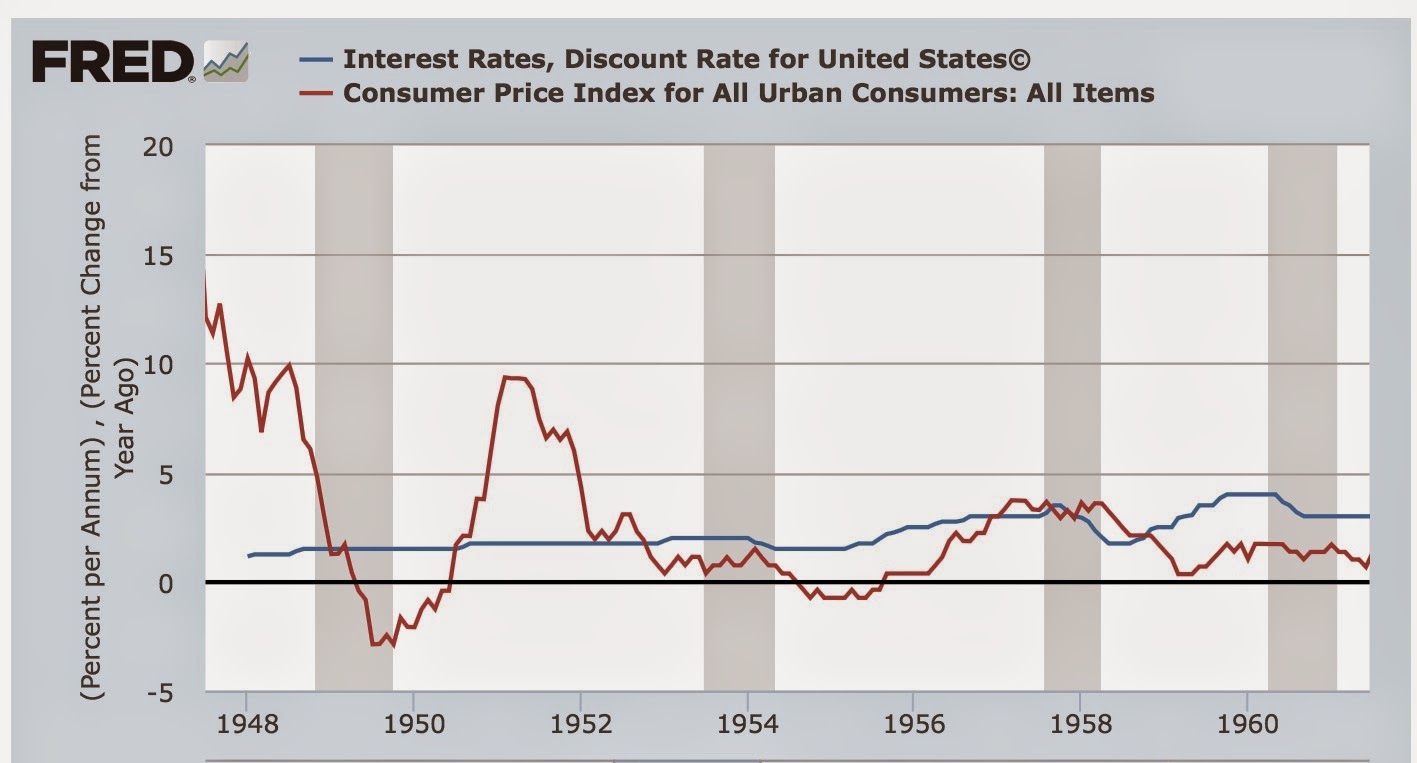 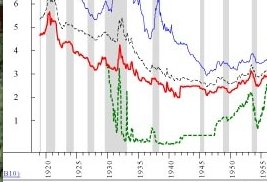 Correlation is not causation and all that, but that’s 3 out of 4 times with disastrous results.  Do you like those odds?

In short, you know that raising rates will put additional pressure on wages and employment. So you think NOW of all times is the appropriate time to raise interest rates.  Really?? Seriously?!?