Jared Bernstein: ” All that said, if the TPP is really a good deal for the US, and since I haven’t read it I can’t say, then based on the first bullet above, I understand, conditional on greater effort than I believe has been expended thus far, that a currency chapter could kill the deal” [HuffPo]. Lotta words there….

Sir Michael Bloomberg: “Hillary and Jeb are the only two who know how to make the trains run” [New York Times]. On time, presumably.

Quinnipiac Swing state poll: CO: Paul 44, Clinton 41; IA: Paul 43, Clinton 42; VA: Clinton 47, Paul 43 [Quinnipiac]. “[D]ifficult to see Secretary Clinton’s slippage as anything other than a further toll on her image from the furor over her e-mail.” (Nate Silver says Quinnipiac is good).

Paul on Walter Scott shooting: “I want to be careful we don’t paint with a broad brush that somehow all our police are bad” [Bloomberg]. Sounds like a dog-whistle, to me.

Cruz to set up multiple SuperPACs, each “controlled by a different donor family, and will likely develop different specialities, such as data mining, television advertising and polling” according to a “strategist” [Bloomberg]. The PACs are named “Keep the Promise I,” “Keep the Promise II,” and so forth. Makes the quid pro quo rather obvious, no?

“A Deep Dive Into Party Affiliation” [Pew Research]. “[W]here the parties stand among various groups in the population.”

Democrats don’t vote [The Atlantic]. I bet they’d vote for real Democrats instead of fake Republicans.

Driverless cars, by their very design, will contribute to three of the big factors that cause motion sickness [WaPo]. But the techno-triumphalism on driverless cars is so strong….

More than a quarter of a million California households and businesses have no meters [Reuters].

Nestlé has made billions on bottling groundwater, and they’re exporting it from California during the drought [David Dayen, Salon]. Next up: Bottled air!

China’s construction of dams and the proposed diversion of the Brahmaputra could become another contentious issue undermining Sino-Indian relations [The Diplomat].

Rahm, asked whether he would serve in the Clinton cabinet: “I have no interest in another job. Zero, zilch” [NBC].

” JPMorgan Algorithm Knows You’re a Rogue Employee Before You Do” [Bloomberg]. So how about the executives?

Workplace context for the Germanwings controlled flight into terrain [Jacobin]. Seems like a system based on trust is gradually eroding, because markets.

“The [IRS] is so short on funds that some employees purchase their own office supplies, even though the IRS says they shouldn’t” [Bloomberg].

How the NYPD message board reacted to the Scott shooting [Business Insider].

How the Scott shooting was reported before the video came out. Headline: “Attorney: North Charleston police officer felt threatened before fatal shooting” [Post and Courier].

” After everything that has happened in Ferguson during the last nine months, 70 percent of people still couldn’t be bothered to make their voices heard in the most basic yet most consequential way” [Baltimore Sun].

“The only time you don’t arrest is if the person is somehow connected to the police…There is a professional courtesy that gets extended to anyone with a badge…” [Keegan NYC]. Report on recent Gilbert Drogheo demonstration.

“[R]esearch strongly suggests that more sophisticated training could lead to more accurate threat identifications, correcting for racial bias that officers may not even be aware of” [The Atlantic].

“Why the Confederacy lives” [Politico].

“Can Police Who Kill be held Accountable?” [Juan Cole].

The Baltimore Police Department has used the Stingray cellphone tracking device thousands of times in recent years while following instructions from the FBI to withhold information about it from prosecutors and judges [Baltimore Sun].

The poor you shall always have with you, but that doesn’t mean you still can’t make them suffer [WaPo].

“Economic disappointment is an increasingly global affair.” With handy chart [The Economist].

“In the absence of an ethical framework that says poverty and its associated suffering is wrong, a rational ruling elite should pursue a policy of using a combination of redistribution and guard labor to attain social stability” [Cory Doctorow, Locus].

Readers, feel free to contact me with (a) links, and even better (b) sources I should curate regularly, and (c) to find out how to send me images of plants. Vegetables are fine! Fungi are deemed to be honorary plants! See the previous Water Cooler (with plant) here. And here’s today’s plant, the third of “I Wish It Were Spring!” week four (Petal): 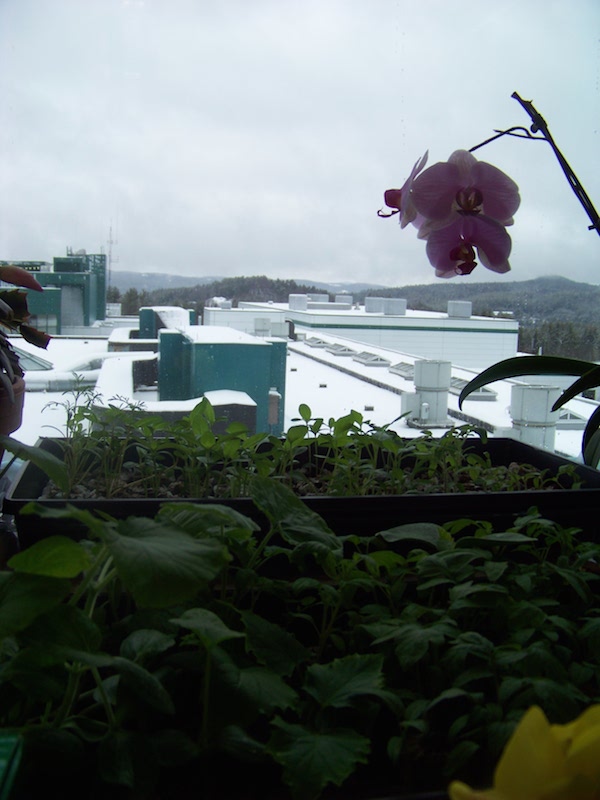 Looking out at the snow over the seedlings.