Lambert here: Sounds like a capital strike, to me, but what would I know?

The debate continues on why businesses aren’t investing more in machinery, equipment, and plants. In advanced economies, business investment – the largest component of private investment – has contracted much more since the global financial crisis than after historical recessions. There are worrying signs that this has contributed to the erosion of long-term economic growth.

Getting the diagnosis right is critical for devising policies to encourage firms to invest more. If low investment is mainly a symptom of a weak economic environment – with firms responding to weak sales as some suggest1 – then calls for expanding overall economic activity could be justified.2 If, on the other hand, if special impediments are mainly to blame, – such as policy uncertainty or financial sector weaknesses, as others suggest (European Investment Bank 2013, and Buti and Mohl 2014, for example), – then these must be removed before investment can rise.

Our analysis in chapter 4 of the IMF’s April 2015 World Economic Outlook suggests that the weak economic environment is the overriding factor holding back business investment.

Investment contracted more severely following the global financial crisis than in historical recessions, but the contraction in output was also much more severe (Figure 1). The joint behavior of business investment and output has therefore not been unusual. The relative response of investment was, overall, two to three times greater than that of output in previous recessions, and this relative response was similar in the current context. If anything, investment dipped slightly less relative to the output contraction than in previous recessions. 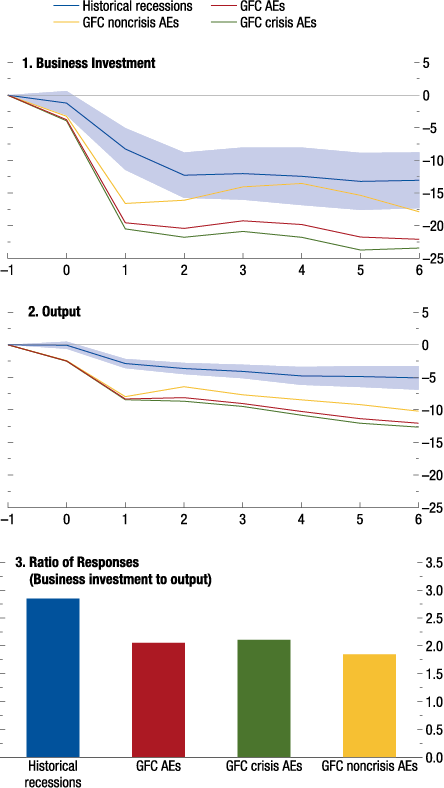 Sources: Consensus Economics; Haver Analytics; national authorities; and IMF staff
estimates.
Note: For historical recessions, t = 0 is the year of recession. Deviations from historical recessions (1990–2002) are relative to spring forecasts in the year of the recession. Recessions are as identified in Claessens, Kose, and Terrones 2012. For the global financial crisis (GFC), t = 0 is 2008. Deviations are relative to precrisis (spring 2007) forecasts. Shaded areas denote 90 percent confidence intervals. Panels 1 and 2 present data for the advanced economies (AEs). GFC crisis and noncrisis advanced economies are as identified in Laeven and Valencia 2012.

At the same time, the endogenous nature of investment and output – that is, the simultaneous feedback from output to investment and then back to output – complicates the interpretation of these results. To correct for this endogeneity, we use an instrumental variables approach and estimate the historical relationship between investment and output based on macroeconomic fluctuations not triggered by a contraction in business investment. Our instruments are changes in fiscal policy motivated primarily by the desire to reduce the budget deficit and not by a response to the current or prospective state of the economy (Devries and others,et al 2011). We use the results to predict the contraction in investment that would have been expected to occur after 2007 based on the observed contraction in output. We then compare the predicted decline in investment after 2007 with the actual decline in investment.

Based on this estimated historical investment-output relation, business investment has deviated little from what could be expected given the weakness in economic activity (Figure 2). In other words, firms have reacted to weak sales – both current and prospective – by reducing capital spending. Indeed, in surveys, businesses typically report lack of customer demand as the dominant challenge they face. 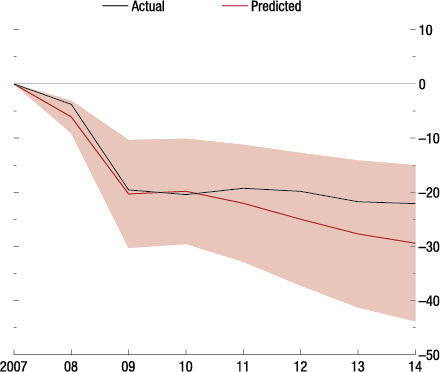 Beyond this general pattern, we find a few cases of investment weakness that go beyond what can be explained by output – particularly in Eurozone countries with high borrowing spreads during the 2010-2011 sovereign debt crisis. After controlling for financial constraints and policy uncertainty, the degree of unexplained investment weakness declines for these economies, suggesting a role for these factors beyond the weakness in output. At the same time, identifying the effect of these factors is challenging based on macroeconomic data, particularly given the limited number of observations for each country since the crisis.

Confirmation of these additional factors at play comes from our analysis of investment decisions by different types of firms. Investment by firms in sectors that rely more on external funds (such as machinery producers) has fallen more since the crisis than investment by other types of firms. And firms whose stock prices typically respond more to measures of aggregate uncertainty have cut back more on investment – even after the role of weak sales is accounted for. This suggests that, given the irreversible and lumpy nature of some investment projects, uncertainty has played a role in discouraging business investment.

Figure 3 provides a simple illustration of this finding by reporting the evolution of investment for publically-listed firms in the highest 25% and the lowest 25% of the external dependence distribution for all advanced economies since 2007. By 2009 investment had dropped by 50% (relative to the forecast) among firms in more financially dependent sectors – about twice as much as for those in less financially dependent sectors. In the case of policy uncertainty, investment had dropped by about 50% by 2011, relative to the forecast, in sectors more sensitive to uncertainty – more than twice as much as in less sensitive sectors. 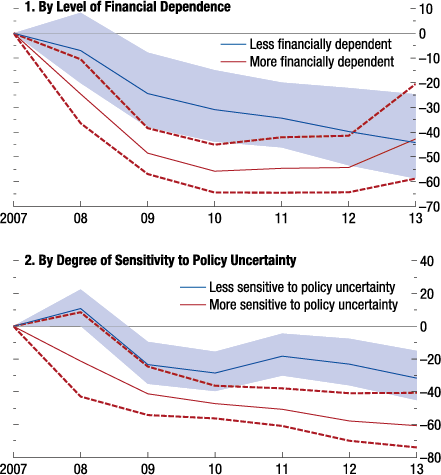 We conclude that a comprehensive policy effort to expand output is needed to sustainably raise private investment. Fiscal and monetary policies can encourage firms to invest, although such policies are unlikely to fully return restore investment fully to precrisis trends. More public infrastructure investment could also spur demand in the short term, raise supply in the medium term, and thus ‘crowd in’ private investment where conditions are right. And structural reforms, – such as those to strengthen labor force participation, – could improve the outlook for potential output and thus encourage private investment. Finally, to the extent that financial constraints hold back private investment, there is also a role for policies aimed at relieving crisis-related financial constraints, including through tackling debt overhang and cleaning up bank balance sheets.

2 Lewis and others (2014) find that, although it has been a major factor, low output growth since the crisis cannot fully account for the weak investment weakness in some of the major advanced economies.