Despite the market jitters of last Friday, which were triggered in part by the recognition that the odds of Greece reaching a deal with its creditors are far lower than had been widely assumed, Greek-related coverage has ratcheted down, even as Greece seems certain not to get any funds released in the April 24 Eurogroup meeting and is very likely to miss the end of April deadline for getting its reforms approved by the Troika and Eurogroup. Per a Bloomberg story yesterday (hat tip George P):

Greece and its creditors remained at loggerheads with time running out to unlock aid and avert a default.

The sides haven’t even set 2015 budget targets, let alone on policies to meet them, an official representing creditors said Monday, asking not to be named as talks aren’t public. Euro-area finance ministers said in February that a list of measures must be agreed upon by the end of April.

In keeping, Mohamed El-Erian said yesterday in a Bloomberg column yesterday pegged the odds of a “Grexident” at 45% (although El-Erian also conflated a default with a Greek exit, when we have pointed out the first does not necessarily mean the latter; given that the Greek government wants to remain in the Eurozone, it would be the ECB that would be the one to force a de facto Grexit by cutting off its bank system life support, the ELA). Greece’s lenders seem willing to continue pushing Greece into submission negotiating past the old drop-dead date.

But the official enforcers have gotten even firmer in their position: Greece must do its homework, as in prepare detailed reforms, and has to hew closely to the existing structural reforms. Christine Lagarde of the IMF last week increased the pressure by saying it would not give Greece a grace period on its payments coming due, as some had hoped.

Never mind that Greece has actually done more in the way of complying than any other European victim and has also shown the worst economic results. Various European officials have stated that they’d rather not have Greece default but they are not prepared to cut Greece any favors in order to avert that outcome. Making sure Greece complies, in other words, is worth the cost of what they believe will be short-term disruption. And they clearly don’t care one iota as far as the cost in Greek lives is concerned.

It’s puzzling to see the Greek government’s apparent failure to acknowledge that the Troika is effectively insisting that it cross its famed “red lines” such as pension “reform” and implementing labor “reform” which means further lowering wage rates. With another government, there could well be important jockeying going on behind the scenes, but heretofore, the ruling coalition has been disconcertingly open about its schisms. And Tsipras still seems to be hostage to the more radical representatives, who represent one-third of Syriza’s block. If they bolt, he no longer has a working coalition.

But if the government plans to hold firm, it really should impose capital controls, which would allow it to talk more openly to the public about what will happen if they do not reach a deal with their creditors. Similarly, if Syriza were to call referendum to convince its creditors that Greece really will default (and maybe exit) if they don’t budge (something the lenders seem to understand full well), it is similarly not clear how they can campaign candidly with no financial firewalls in place.

In the meantime, Greek officials continue to take desperate measures to buy more time and avoid default. Yesterday, for instance, the central government ordered local authorities to move cash and deposits to the central bank, presumably so the national government could, um, borrow them.

This chart from a a different Bloomberg story (this one by Mark Whitehouse) shows what the failure to impose capital controls (in combination with the ECB stoking the bank run) has cost Greece: 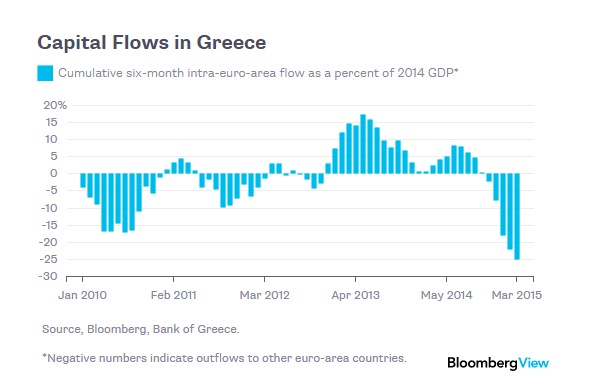 As Whitehouse pointed out:

Greece and its creditors would do well to step back and survey the wreckage as they enter yet another week of brinkmanship: Data on capital flows suggest they’ve undone years of confidence-building in a matter of months….

Data from the Greek central bank, which records each euro that leaves the country as a liability, suggest the capital flight has reached unprecedented proportions. Over the six months through March, about 62 billion euros ($67 billion) were taken out of Greece. That’s the equivalent of a quarter of the country’s gross domestic product.

Admittedly, we did have the Foreign Minister try to upset the apple cart by wrangling advance funding of a newly-inked pipeline deal with Russia. Russia and the Greek government denied any such deal was underway. This may have been an effort to pressure Tsipras, but all it did was yet again make the government look as if it is in disarray. Perhaps the moderates are trying to cut a deal with its old nemesis, Pasok, so it can ditch the radicals. But if not, there is no way Greece can reach a deal with the creditors. The hardliners will not bent to the Troika’s demands. Yet Tsipras and Varoufakis remain in denial that they are on a collision course, and their counterparts have now made it very clear that they are not pulling out of this game of chicken.

The Greek government released data today showing that, contrary to what yours truly had surmised, Greek authorities had increased their primary surplus for the first three months of 2015. However, as Bruegel explains, that result was achieved by taking short-term expedients, most important cutting expenditures and delaying payments, that can’t go on for long:

In conclusion, the data published today suggest there has been an improvement in the primary budget, mostly due to expenditure cuts. Revenues over-performance is mainly explained by increase in the public investment budget, whereas ordinary revenues have not yet picked up sufficiently to absorb the underperformance of the first two months of the year. At the same time, expenditure control is mainly achieved by postponing payments to suppliers, which can be effective in improving the budget in the short term, but the postponement of state payments suppliers may hurt the real economy even further and is in fact unsustainable of the state wants to receive the necessary supplies.

So Greece is already worsening its austerity merely to keep negotiating. And before readers argue for a Grexit, as opposed to a mere default, the bear in mind that the costs. both short-term and long term, to the already-desperate Greek public really would be higher.

It is still astonishing that the European elites have convinced themselves that adhering to the procedures used to implement clearly unsuccessful austerity programs are so important as to justify creating a failed state. Is this what the European project stands for? It’s sadistic and destructive, but there seem to be no cooler heads who can deter the power players, the ECB and the IMF, from this course of action.