In our coverage of the Greek government’s efforts to end austerity and negotiate a debt restructuring and a shift to pro-growth policies, we’ve stressed how unlikely the ruling coalition was to succeed. That meant it has been frustrating for readers to see the new government make unforced errors and reduce its already low odds of success. But even worse is the specter of Syriza now taking steps to wring money out of a long-sufffering population in order to make payments to creditors. As reader Ned Ludd wrote:

I think the majority of Syriza was always amendable to being the new PASOK. The path to power, of course, required pretending that a Syriza-led government would be fundamentally different (and to the left of) PASOK.

Since the end goal was always a deal with the Troika, though, PASOK would have gotten a better deal than Varoufakis ever could. “If you can’t bite, better not show your teeth.” ~ Yiddish Proverb.

As we discussed yesterday, would the old mainstream coalition have dared to pilfer pension funds, local government deposits, and university surplus cash, particularly when the odds are high that the government will soon be forced to capitulate or default?

Nevertheless, some readers have been unhappy that we have not been harsher critics of the creditors. It is a mystery to us why the Troika is willing to risk turning Greece into a failed state to a make a point about the cost of defying its authority. And we’ve chronicled over the years how austerity policies have failed.

However, the Greek government has exposed how deeply wedded not only the Eurocrats, but also the governments that have been forced to wear the austerity hairshirt are to economic faith healing. The Latvian government actually believes its program is a success, when that “success” was achieved through a 14% decline in the population as the youngest and most energetic departed, leaving Latvia with an aging populatoin. And as we and other commentators observed years ago, the contractionary policies inflicted on the periphery countries would eventually infect the core, and that is starting to occur as deflation takes hold in Europe.

A new paper by Dutch economist Servaas Storm znd C.W.M. Naastepad, embedded at the end of this post, does a deft job of shredding the two key beliefs that underlie austerity policies: that government profligacy and insufficiently competitive labor markets caused the crisis, so the remedy is to crack down on government spending and wage rates.

In contrast to most economic papers, this one is not just well documented but also well written. The authors give themselves license to decry these intellectually bankrupt policies. The abstract:

The Eurozone crisis has been wrongly interpreted as either a crisis of fiscal profligacy or of deteriorating unit-labour cost competitiveness (caused by rigid labour markets), or a combination of both. Based on these diagnoses, crisis-countries have been treated with the bitter medicines of fiscal austerity, drastic wage reductions, and far-reaching labour market deregulation—all in the expectation that these would restore cost competitiveness and revive growth (through exports), while at the same time allowing for fiscal consolidation and private-sector debt deleveraging. The medicines did not work and almost killed the patients. The problem lies with the diagnoses: the real cause of the Eurozone crisis resides in unsustainable private sector debt leverage, which was aided and abetted by the liberalization of (integrating) European financial markets and a “global banking glut”.

The raw numbers show how badly the orthodox policies have performed. European GDP has yet to reach its precrisis level, and the average unemployment level is 12%, and the social costs are high as well:

The crisis is creating an even more polarized society in which the poorest have to fight for access to basic items such as critical medicines, have to queue up for the soup kitchens and are ever more often homeless. The crisis has turned the Southern Eurozone into a depressing world of closing of possibilities, hopes and dreams, a dark world of heightened inequalities, high unemployment, pay cuts, rising in-work poverty, and people going hungry, hunting for food through garbage cans—as there is no (longer a) welfare state to fall back upon.

As Storm and Naastepad debunk what they depict as the central myths of the Eurozone crisis. The first is that the meltdown was the direct result of the famed “profligacy” of nation-states, and was thus always a sovereign crisis. As Naked Capitalism readers know well, the sovereign debt crisis was the result of the banking system implosion. Governments were hit with a collapse in tax revenues as GDP fell and higher levels of spending as payments under social safety net programs like unemployment insurance rose. In addition, governments also bore the cost of bank bailouts, and in some countries, notably Ireland, they were particularly costly.

As the paper shows, government debt to GDP ratios in the eight years preceding the crisis actually fell by an average of 6%. And most of the periphery countries were among the ones who had improved debt to GDP ratios: Italy’s fell by 7%, Ireland’s by 8% and Spain’s by as much as 27%. Even supposed wastrel Greece saw its debt to GDP ratio rise by 4%, lower than the 5% increase posted by France and Germany. Greek debt traded at spreads as low as 30 basis points over Germany’s in 2007.

The authors show that there was indeed a runup in debt before the crisis, namely, private debt and in particular, the debt of financial corporations:

For the statistically-minded, the paper has several analyses that lend further support for this argument. Storm and Naastepad point out that the IMF has ‘fessed up that fiscal multipliers are typically higher than one, meaning a cut in government spending results in an even greater fall in GDP, making the debt level even worse. The authors stress that the IMF estimates are conservative, so the damage of misguided austerity policies is likely to be greater than they indicate.

The second big myth is that inefficient labor markets (meaning too well paid and pampered workers) were another primary cause of the crisis. This belief is why European authorities become outraged at Greece’s plans to raise the minimum wage and strengthen labor bargaining rights.

Storm and Naastepad contend that orthodox thinkers naively equate low labor costs with greater competitiveness, when labor is only one factor in costs, and cost is far from the only aspect of competitiveness: 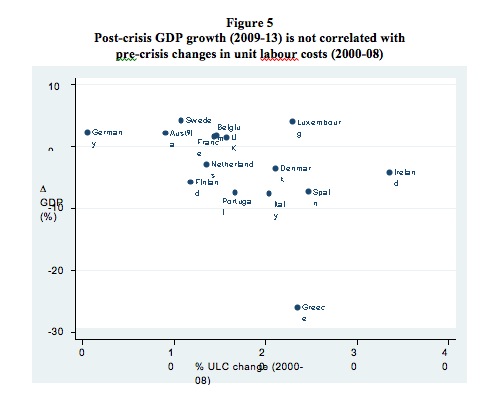 The problem with the “labour cost competitiveness” explanation is not that the data—as given in Figure 5—prove Mr. Bini Smaghi wrong, as there is no statistically significant correlation between pre-crisis increases in unit labour costs (ULC) and post-crisis growth performance for Europe and the Eurozone. The problem is a much deeper one as it concerns a leap of logic, a misleading use of the term “competitiveness” which philosophers would label equivocation, by which the—broad—concept of “competitiveness” is reduced, with remarkable sleight of hand, to competitiveness in terms of only relative unit-labour costs (or RULC). This is no trivial issue, as, firstly, it is no secret that economics lacks an agreed definition and measure of “international competitiveness” (Wyplosz 2013; Storm and Naastepad 2015a), and, secondly, often-used competitiveness indicators, such as RULC and/or current account imbalances, are known to be weak predictors of future export and import performance….. Instead, we (and others) find that

1. most goods & services imported into the Eurozone are “non-competing” imports used as intermediate inputs in manufacturing or for consumption—hence imports depend almost completely on domestic income (see also Bussière et al. 2011).
2. export performance by Eurozone members is overwhelmingly determined by world income growth (see also European Commission 2010; Danninger and Joutz 2007; Schröder 2015). Countries (such as Germany) exporting to fast-growing markets (such as China) experienced rapid export growth, whereas countries (such as Greece, Italy and Portugal) catering to slowly-growing markets had much lower export growth (ECB 2009).

Wage costs don’t matter that much, in other words…However, all this does not mean that “competitiveness” is unimportant. It is non-price or technological competitiveness which matters—not price or cost competitiveness

The misguided fixation on labor costs (which are visible and easy to measure, while an assessment of technological competitiveness isn’t readily relegated to a spreadsheet) leads to bad policy: 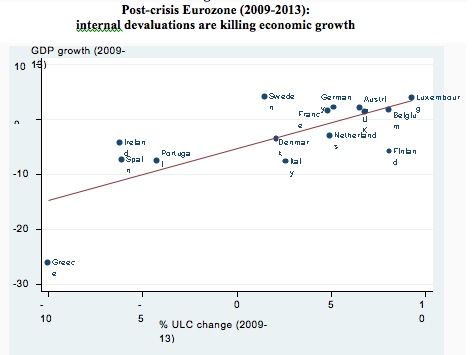 Here are some of the negative competitive consequences of pushing to reduce wage rates and lower labor bargaining power:

Moreover, in more flexible labour markets, firms will invest less in workers’ firm-specific human capital and this hurts productivity as well (Lee and McCann 2011; Kleinknecht et al. 2013). Labour market deregulation may affect productivity through its impact on worker motivation and effort, as it erodes social capital and trust in the labour relation (Storm and Naastepad 2012). Likewise, lower wages and more flexible labour slow down the process of capital deepening, enable inefficient firms to stay in the market and discourage structural change. Finally, lower wage and demand growth reduce the pace at which older vintages of capital stock are being scrapped and new equipment, embodying the latest more productive technologies, is being installed. Taken together, lower wage growth gets reflected in lower labour productivity growth and weaker export performance (for reviews of the evidence, see Storm and Naastepad 2012; Kleinknecht, Naastepad, Storm & Vergeer 2013).

Post-crisis policies have strengthened Germany’s position relative to the periphery; the authors treat that as a terrible mistake; one has to wonder whether it is actually a feature:

This brings us to the real problem of the Eurozone: the widening differentials in labour productivity and technological capabilities between members of the Eurozone. Productive asymmetries have increased within the Eurozone after monetary union. In the pre-crisis years, Germany managed to strengthen its production structure, but the Eurozone periphery lost ground—both their manufacturing activities and export bases became relatively more narrow and technologically stagnant

Germany’s rising trade surplus, now at over 7% of GDP, is widely regarded as unsustainable, particularly since Germany refuses to continue financing its trade partners.

It’s been remarkable to see how long Europe has been able to keep a broken economic model going well beyond its sell-by date. How long they can keep this up is still very much open to question. However, Storm’s and Naastepad’s paper is an important addition to a now robust literature on the contractions and failures of Europe’s post-crisis economic policies. When the day of reckoning finally arrives, no on in authority can claim they were not warned.