Yves here. It’s frustrating to watch Fed officials and pundits wring their hands about how all that super cheap money is not finding its way into the hands of small businessmen who are the engines of job creation in the US. One reason why is that businesses that in the real economy (and not in the business of goosing stock prices for the benefit of top executives) don’t borrow just because money is on sale but because they see an opportunity. In this spotty “recovery,” there are plenty of company owners who are not in the mood to stick their necks out by borrowing to try to expand.

But another big factor is that banks have exited small and medium sized business lending. Until sometime in the mid 1980s, banks had credit officer training programs that taught them how to lend to businesses large and small. The training was extensive and took two years at big banks like Chase Manhattan. The graduates went on to make big corporate loans or to get on track in retail branches to become branch managers, where they’d oversee loan approvals and get involved personally in assessing the larger or more complex loans in that branch. But as Wall Street kept encroaching on traditional bank lending, and more and more of the credit officers themselves got MBAs and often wound up in investment banks, commercial banks almost entirely abandoned credit assessment and embraced securitization.

A colleague, Amar Bhide at Tufts, argues that securitization requires standardized, low information content assets. That is one reason that collateralized loans are preferred for securitization: there’s a false sense of security in describing the value of the loan in various ways in relation to the value of the collateral (after all, if a market falls completely out of bed, as Texas did in the oil bust of the early 1980s, all those collateral “values” and income streams go poof).

Needless to say, as this VoxEU post alludes, the shift over time to prefer collateralized lending has the effect of channeling funds to less productive sectors of the economy, such as home and office building, over more productive investment. This echoes the findings of an important Bank of International Settlements paper by Stephen Cecchetti and Enisse Kharroubi which describes how financial services sectors become overgrown and drag down growth. From a summary in the Economist:

In short, the finance sector lures away high-skilled workers from other industries. The finance sector then lends the money to businesses, but tends to favour those firms that have collateral they can pledge against the loan. This usually means builders and property developers. Businessmen are lured into this sector rather than into riskier projects that require high R&D spending and have less collateral to pledge. On a related note, see our recent Free Exchange on how bank lending has become more focused on residential property.

A property boom then develops. But property is not a sector marked by high productivity growth; it can lead to the misallocation of capital in the form of empty Miami condos or Spanish apartments. In a sense, this echoes the research of Charles Kindleberger who showed that bubbles are formed in the wake of rapid credit expansion or Hyman Minsky who argued that economic stability can lead to financial instability as financiers take more risk.

By Clemens Jobst, Economist at the Oesterreichische Nationalbank, Research Affiliate at CEPR and Stefano Ugolini Assistant Professor of Economics, University of Toulouse. Originally published at VoxEU

Central banks today provide liquidity exclusively through purchases of (mostly) government bonds and through collateralised open-market operations. This column considers the evolution of liquidity provision by central banks over the past two centuries, and argues that there are alternative approaches to those that are focused on today. One such alternative is a revival of the 19th century practice of uncollateralised lending. This would discourage market participants from relying on informational shortcuts, and reduce the likelihood that informational shocks trigger collateral crises.

One of the most acute problems experienced by developed countries since 2008 is that the expansion of the monetary base has not been matched by an expansion of credit to economic activity. In January 2015 loans to the private sector were still contracting in the euro area, despite a steady increase in the money supply. The long-lasting contraction of credit has particularly hit small and medium-sised enterprises (SME), which have often found themselves exposed to rationing. The question of how to repair the transmission channel has therefore naturally emerged. Given the malfunctioning of bank lending channels, should central banks find alternative strategies for easing SMEs’ access to credit?

The Limits to Collateralised Lending

One possible solution involves designing better mechanisms for securitising small corporate debt – once turned into standardised collateral, SMEs’ highly idiosyncratic debt could thus be made eligible to central bank operations (e.g., see Brunnermeier and Sannikov 2014). By intervening directly on the asset-backed corporate securities market, central banks could in this way bypass the banking system. This would not actually imply any major change in monetary policymaking for major central banks, who engage exclusively in collateralised operations today. As recent experience and theoretical developments have shown, however, the big problem with standardised collateral is that it is constructed precisely in order to allow lenders to save on information-gathering costs. As a result, the price of standardised collateral tends to be prone to informational shocks, which can easily trigger money market freezes (Gorton and Ordoñez 2014). In such circumstances, the only way a central bank can prevent the freeze of a collateralised loan market is by transforming itself into a ‘market-maker of last resort’ – clearly a suboptimal outcome (Buiter and Sibert 2007). All this suggests that collateralised loan markets might not necessarily be an ideal intervention ground for central banks – especially when the risk of a ‘collateral shock’ is highest. An alternative might consist of going the opposite way – rather than operating on a standardised collateral debt market that incites participants not to collect information, the central bank could operate on an uncollateralised debt market that does incite participants to rely on valuable information.

Uncollateralised and collateralised lending can be associated to two different concepts of liquidity, corresponding respectively to today’s definitions of liability-side (funding) liquidity, i.e. the ease with which funding can be obtained; and asset-side (market) liquidity, i.e. the ease with which a given asset can be sold (Holmström and Tirole 2010). In some scholars’ view, these two concepts of liquidity are but the two sides of the same coin (e.g., see Brunnermeier and Pedersen 2009) – but this applies only if liability-side liquidity can be exclusively obtained through collateralised loans, access to which is proportional to available collateral. This is not necessarily always the case, though – when uncollateralised transactions are easily available, funding and market liquidity are not bound to behave accordingly. The reason is that uncollateralised operations may involve other kinds of (moral) guarantee (Ghatak and Guinnane 1999). This suggests that the two concepts do not perfectly coincide. The fact that the central bank chiefly provides the one or the other type of liquidity will provide different incentives to information-gathering by money market participants. 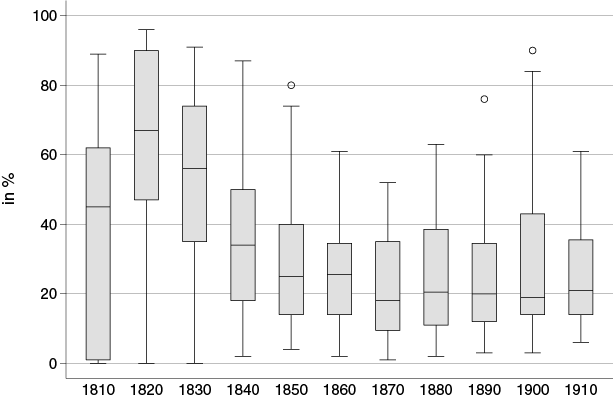 Source: Jobst and Ugolini (2014). The database includes ten countries (Austria, Belgium, Switzerland, Germany, France, Italy, Netherlands, Norway, UK, and US). For individual country data, see table 2 in the paper.
Note: Each central bank is one observation. Boxes cover observations between the first and third quartile (inside line being the median), whiskers cover the remaining observations except outside values. Outside values (smaller/larger than the first/third quartile less/plus 1.5 times the interquartile range) are plotted individually.
19th century central bankers’ bias for uncollateralised operations

The extent to which central bankers engage in one of the two interventions may be related to the credit risk associated with each type of operations. In principle, thanks to the double guarantee provided by the borrower and by the collateral, secured transactions should be less risky – in particular if the collateral consists of easily marketable government securities and haircuts are significant. However, unsecured lending through the purchase of commercial bills (the standard 19th century discount operation) also benefitted from the additional safety feature provided by the joint moral guarantee of all persons (at least two) who had signed the bill. Unlike marketable securities, moreover, bills were subject to credit risk but not to market risk, as their price at maturity was not liable to vary. As a result, none of the two types of operations was necessarily superior to the other as far as risk is concerned.

Commentators unanimously report that discounting of uncollateralised (but jointly-guaranteed) commercial bills was clearly preferred in the 19th century:

• Discounting was deemed to provide more flexibility for the adjustment of overall liquidity. Continuous backflows from bills falling due could facilitate the granting of new loans to new counterparties, which was useful whenever money markets were not working perfectly. Central banks might have been forced to prolong collateralised loans, or face difficulties selling the collateral. Bills, on the other hand, were considered to be ‘self-liquidating’, a widespread notion in 19th-century banking (Plumptre 1940). The same concern about liquidity can also explain the preference of many central banks for real bills over finance bills, as finance bills (with their need to be rolled over at maturity) rather resemble collateralised loans in moments of financial stress.
* It was possible to derive valuable information on economic activity from the bills submitted to discount. Central banks were big players in the money market. For instance, around 1900 40% of all bills originated in France each year passed through the Banque de France’s discount window (Roulleau 1914). Central bankers were hence necessarily concerned about financial stability, and the discounting of bills was thought to provide the possibility to manage the extent of risk-taking in the economy, because the origination and distribution of bills were possible to track (Flandreau and Ugolini 2013). Moreover, by encouraging or discouraging the presentation of certain types of bills for discounting at its discount window, central banks could encourage or discourage particular activities or sectors (Allen 2014).

Central bankers’ attitude seems to have changed following the crowding-out of the commercial bill market by the government debt market, engendered by the world wars. The costly information-gathering mechanisms put into place in order to monitor risk-taking in the bill market became less and less useful, and central bankers gradually started to dismiss them. This prompted a rethinking of the concept of liquidity, which became closer to the modern one – according to which asset- and liability-side liquidity are but two sides of the same coin (Plumptre 1940, Brunnermeier and Pedersen 2009). Today, central bankers no longer focus on the maturity of outright holdings (i.e., their being self-liquidating) but on the possibility to sell them on the market if need be (i.e., their ‘shiftability’). Shiftability, however, appears to be very sensitive to informational shocks (Gorton and Ordoñez 2014). As a result, central banks have increasingly found themselves exposed to collateral crises – and hence, to the risk of having to become market-makers of last resort.

Unlike their 19th century predecessors, today’s central banks no longer try to have access to superior information than markets – as any other market participant, they rely on the informational shortcuts provided by collateralisation. As a result, central banks appear to be fatally doomed to become market-makers of last resort whenever informational shocks trigger the unravelling of collateral crises. An alternative might consist of reviving 19th century practice and reactivating uncollateralised lending, thus encouraging all market participants not to rely on informational shortcuts. This might perhaps provide a more efficient strategy in order to repair the transmission channel. Sure, the costs of rebuilding information-collection mechanisms might well be substantial; but economies of scope must exist between monetary policy implementation and the carrying-out of the financial stability mandate.