Interesting headline, yes? I have a two-point intro and then the piece.

For example, a network of private “security consulting” firms does standing business with the (Pentagon’s) NSA, and by some accounts performs 70% of their work. Are those firms part of the NSA or not? Most would say yes, to a great degree. It’s certain that the NSA would collapse without them, and many of these firms would collapse without the NSA (though many have other … ahem, international … clients, which starts an entirely different discussion).

As another example, the role of mega-lobbying firms as a fourth branch of government was explored here. Same idea.

Second, consider how in general the “world of money” and the parallel world of “friends of money” — its enablers, adjuncts, consiglieri and retainers — flow in and out of the world of government, of NGOs, of corporate boards, of foundation boards, attends Davos and the modern Yalta (YES) conference, and so on. Now consider how someone like Hillary Clinton — not money per se, though she has a chunk, but certainly a “friend of money” — ticks off most of those boxes (foundation board, corporate board, government, Davos, Yalta, and so on). There are many people like Hillary Clinton; she’s just very front-and-center at the moment.

Which suggests the questions:

A fascinating piece. I’m guessing the authors think the answers above are:

Now the piece from The Independent (my emphasis). Note that it was written in 2011.

The ascension of Mario Monti to the Italian prime ministership is remarkable for more reasons than it is possible to count. By replacing the scandal-surfing Silvio Berlusconi, Italy has dislodged the undislodgeable. By imposing rule by unelected technocrats, it has suspended the normal rules of democracy, and maybe democracy itself. And by putting a senior adviser at Goldman Sachs in charge of a Western nation, it has taken to new heights the political power of an investment bank that you might have thought was prohibitively politically toxic.

This is the most remarkable thing of all: a giant leap forward for, or perhaps even the successful culmination of, the Goldman Sachs Project.

It is not just Mr Monti. The European Central Bank, another crucial player in the sovereign debt drama, is under ex-Goldman management, and the investment bank’s alumni hold sway in the corridors of power in almost every European nation, as they have done in the US throughout the financial crisis. Until Wednesday, the International Monetary Fund’s European division was also run by a Goldman man, Antonio Borges, who just resigned for personal reasons.

Even before the upheaval in Italy, there was no sign of Goldman Sachs living down its nickname as “the Vampire Squid”, and now that its tentacles reach to the top of the eurozone, sceptical voices are raising questions over its influence. The political decisions taken in the coming weeks will determine if the eurozone can and will pay its debts – and Goldman’s interests are intricately tied up with the answer to that question.

Simon Johnson, the former International Monetary Fund economist, in his book 13 Bankers, argued that Goldman Sachs and the other large banks had become so close to government in the run-up to the financial crisis that the US was effectively an oligarchy. At least European politicians aren’t “bought and paid for” by corporations, as in the US, he says. “Instead what you have in Europe is a shared world-view among the policy elite and the bankers, a shared set of goals and mutual reinforcement of illusions.”

This is The Goldman Sachs Project. Put simply, it is to hug governments close. Every business wants to advance its interests with the regulators that can stymie them and the politicians who can give them a tax break, but this is no mere lobbying effort. Goldman is there to provide advice for governments and to provide financing, to send its people into public service and to dangle lucrative jobs in front of people coming out of government. The Project is to create such a deep exchange of people and ideas and money that it is impossible to tell the difference between the public interest and the Goldman Sachs interest.

Mr Monti is one of Italy’s most eminent economists, and he spent most of his career in academia and thinktankery, but it was when Mr Berlusconi appointed him to the European Commission in 1995 that Goldman Sachs started to get interested in him. First as commissioner for the internal market, and then especially as commissioner for competition, he has made decisions that could make or break the takeover and merger deals that Goldman’s bankers were working on or providing the funding for. Mr Monti also later chaired the Italian Treasury’s committee on the banking and financial system, which set the country’s financial policies.

With these connections, it was natural for Goldman to invite him to join its board of international advisers. The bank’s two dozen-strong international advisers act as informal lobbyists for its interests with the politicians that regulate its work. Other advisers include Otmar Issing who, as a board member of the German Bundesbank and then the European Central Bank, was one of the architects of the euro.

Perhaps the most prominent ex-politician inside the bank is Peter Sutherland, Attorney General of Ireland in the 1980s and another former EU Competition Commissioner. He is now non-executive chairman of Goldman’s UK-based broker-dealer arm, Goldman Sachs International, and until its collapse and nationalisation he was also a non-executive director of Royal Bank of Scotland. He has been a prominent voice within Ireland on its bailout by the EU, arguing that the terms of emergency loans should be eased, so as not to exacerbate the country’s financial woes. The EU agreed to cut Ireland’s interest rate this summer.

I’d love to know what he did as a public official and advisor to government to grease his skid into Goldman, or what Goldman did with him while he was AG to grease his slide to them.

Picking up well-connected policymakers on their way out of government is only one half of the Project, sending Goldman alumni into government is the other half. Like Mr Monti, Mario Draghi, who took over as President of the ECB [European Central Bank] on 1 November, has been in and out of government and in and out of Goldman. He was a member of the World Bank and managing director of the Italian Treasury before spending three years as managing director of Goldman Sachs International between 2002 and 2005 – only to return to government as president of the Italian central bank.

These men are not alone. This is a well-trod two-way street. But that’s not the worst of Goldman’s sins, in the view of many. This kind of thing is…

There’s a special place in hell, though, for what Goldman did, and through its “alumni” is doing, to Greece. This has been much covered (if not much read), so I’ll quote The Independent, then send you to other sources.

Mr Draghi has been dogged by controversy over the accounting tricks conducted by Italy and other nations on the eurozone periphery as they tried to squeeze into the single currency a decade ago. By using complex derivatives, Italy and Greece were able to slim down the apparent size of their government debt, which euro rules mandated shouldn’t be above 60 per cent of the size of the economy. And the brains behind several of those derivatives were the men and women of Goldman Sachs.

The bank’s traders created a number of financial deals that allowed Greece to raise money to cut its budget deficit immediately, in return for repayments over time. In one deal, Goldman channelled $1bn of funding to the Greek government in 2002 in a transaction called a cross-currency swap. On the other side of the deal, working in the National Bank of Greece, was Petros Christodoulou, who had begun his career at Goldman, and who has been promoted now to head the office managing government Greek debt. Lucas Papademos, now installed as Prime Minister in Greece’s unity government, was a technocrat running the Central Bank of Greece at the time.

Quoting Matt Taibbi from my own 2012 examination of how Goldman screwed Greece and also Jefferson County, Alabama:

In other words, banks like Chase and Goldman knowingly larded up the nation of Greece with a crippling future debt burden, then turned around and helped the world bet against Greek debt. … [D]oes a human being do that deal?

Operations like the Greek swap/short index maneuver were easy money for banks like Goldman and Chase – hell, it’s a no-lose play, like cutting a car’s brake lines and then betting on the driver to crash – but they helped create the monstrous European debt problem that this very minute is threatening to send the entire world economy into collapse, which would result in who knows what horrors.

What Does “National” Government Mean if International Organizations Run Them?

But we’re going meta here, and not into hell with Goldman Sachs and the humans who made these decisions. Just as modern so-called “trade” deals are vehicles to bypass sovereign national courts on behalf of the international “investor class,” the infiltration of government by organizations that hold much of the wealth of that class is, in effect, a nullification of sovereignty from the inside.

Take just the case of Greece. Goldman Sachs helped make their problem worse. European bankers and other big investors held a ton of Greek sovereign debt when the global crash occurred. Mario Draghi, head of the ECB, former IMF member, former Italian Treasury official, former Goldman official, is now helping put the screws to Greece so bankers like Goldman and their friends, among others, can be paid back despite making risky (and in some cases, immoral) deals.

Bankers profited when the deals were created. Draghi is making sure they won’t now suffer harm. Who is Mario Draghi, ex-banker, working for?

Or am I asking the wrong question. Is Goldman Sachs called “Government Sachs” because they — along with the rest of the global investor class — own these governments? 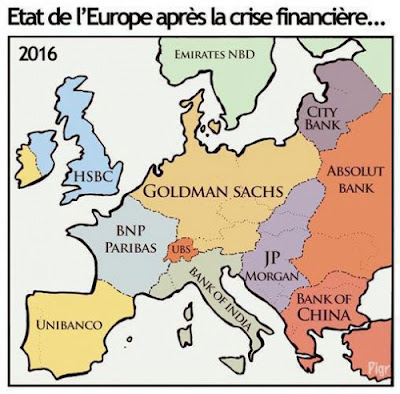 A fanciful view of Europe after the crash of 2016 (source). What’s wrong with this image? That bank control mostly follows national borders.

Or are they called “Government Sachs” because they are these governments, ruling their economic policies from a network of corporate boardrooms?