Finance and growth are intimately connected. For at least two decades, we have known that for economies to thrive, they need deep and broad financial systems (Levine 1997). But what is true for emerging market economies may not be true in the advanced world. That is, finance could very well be a two-edged sword. When credit is relatively low, or the financial sector’s share of employment modest, higher levels of debt add to growth. But there is a threshold beyond which it becomes a drag. There is now considerable evidence that productivity grows more slowly when a country’s government, corporate or household debt exceed 100% of GDP (see Reinhart and Rogoff 2010, Cecchetti et al. 2011, and Cecchetti and Kharroubi 2012).

The Link Between Financial Growth and Real Growth

Graph 1 plots growth in real GDP per person employed on the vertical axis against two measures of financial sector growth on the horizontal: growth in private credit to GDP (left-hand panel) and growth in the share of total employment that is in financial intermediation (right-hand). We use data on 20 advanced economies from 1980 to 2010. In every case, data are averaged over five year periods and measured as deviations from the country mean. The figure shows a clear negative relationship between financial sector growth and productivity growth. The line running through the scatter plot has a negative slope with a coefficient that is significantly less than zero at the 1% level in both cases.

To ensure that the impression from the graph is in fact an accurate reflection of the relationship in the data, we estimate a simple growth regression that both examines a variety of measures for financial sector growth and controls for things like initial conditions, inflation, the size of government, trade openness, population growth, investment to GDP and the occurrence of financial crises. Our conclusion is quite robust – there is a clear negative relationship between financial sector growth and real growth. 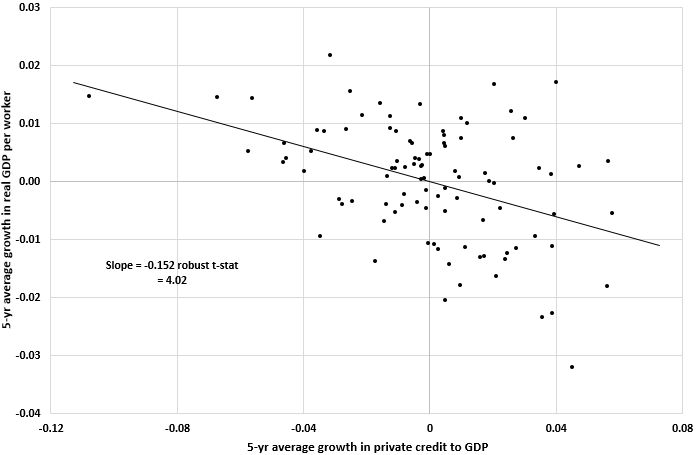 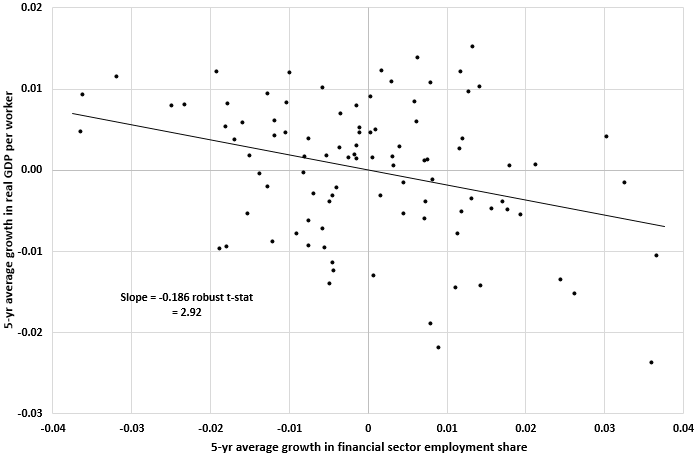 We can get a sense of the size of the effect by looking at some specific examples. Consider the cases of Ireland and Spain. Starting with Ireland, from 2005 to 2010 the ratio of Irish private credit to GDP more than doubled, growing 16.9% per year. By contrast, over the five years from 1995 to 2000, it grew at a more modest average annual rate of 7.7%. Our estimates (not reported here) imply that this 9.2 percentage point difference has resulted in a productivity slow-down over 2005-2010 of 0.8 percentage points per year compared to the period 1995-2000. This accounts for around 30% of the 2.9 percentage point drop in productivity growth (from 3.3% a.r. to 0.4% a.r.) that occurred over this period.

Why Finance is Doing Harm

What is behind this empirical regularity? What is the mechanism by which finance, something we know to be fundamental to the operation of the economy, is doing harm? Our hypothesis is that it arises because finance tends to favour relatively low productivity industries as such industries usually own assets that are relatively easy to pledge as collateral. So as finance grows, the sectoral composition of the economy changes in a way that drives aggregate total factor productivity down. The intuition for this comes from the observation that it is easier to obtain external finance for projects that are based either use tangible capital in their production or produce more tangible outputs. The more tangible a firm’s assets or output, the easier it is to pledge them as collateral for a loan.

We take this prediction to the data and study 33 manufacturing industries in 15 advanced economies. The key to figuring out which sectors are most likely to be damaged from financial sector growth requires that we look for the sectors where pledging of either assets or output is difficult. On the asset side, we can measure this directly from information on asset tangibility. For output, we use research and development intensity as a proxy.

As for the quantitative implications of these estimates, we find that productivity of an industry with high asset tangibility located in a country experiencing a financial boom tends to grow 2.5-3% a year more quickly than an industry with low asset tangibility located in a country not experiencing such a boom. This is quite a large effect, especially when compared with the unconditional sample mean and volatility of labour productivity growth of 2.1% and 4.3%, respectively.

Financial booms are not, in general, growth-enhancing. And, the distributional nature of the impact is disturbing, as credit booms harm what we normally think of as the engines for growth – those industries that have either lower asset tangibility or high research and development intensity. This evidence, together with recent experience during the financial crisis, leads us to conclude that there is a pressing need to reassess the relationship of finance and real growth in modern economic systems.