Yves here. This wonky-seeming post has very serious policy implications. The reason that the standard IMF prescription has “worked,” albeit at high cost to citizens, is that in countries facing foreign exchange crises, the one-two remedy of “break corrupt oligarchies” (which the IMF really does try to do) and “cheapen currencies to goose exports” does remedy the foreign exchange crisis, even if it makes workers worse off (via the cost of the crisis itself, and often higher food and fuel costs, since those are often imported and constitute a very high proportion of the budget of poor people, so any increases in price can be devastating).

But if weakening currency prices provides less in the way of export gains in the past, it throws a whole set of standard remedies into question. But it also serves to explain some recent conundrums, such as the widely-noted fact that Greece did not get the export gains it should have from reducing labor costs. And that suggests that Greek “reforms” will be even less productive than expected, but that the alternative of a Grexit is also not as good a remedy as popularly believed either.

Competitively valued exchange rates are often seen as crucial to promote exports (e.g. Freund and Pierola 2012, Eichengreen and Gupta 2013). However, in the aftermath of the Global Crisis, some episodes of large depreciations appeared to have had little impact on exports, the depreciation of the yen being the main example. This has led some observers to question the effectiveness of lower exchange rates (Financial Times 2015).

Figure 1 focuses on a sample of Central Eastern European countries and provides some suggestive preliminary evidence. The figure shows that those countries that are more tightly integrated in German supply chains (Poland, Hungary, Czech Republic and Slovakia) saw a much stronger flattening of the relationship between real effective exchange rate (REER) growth and export growth to Germany than those that are more loosely integrated in German supply chains (Bulgaria, Latvia, Lithuania, Romania, and Slovenia). While other factors were certainly at play, this evidence suggests that cross-border production linkages may contribute to reducing the effectiveness of depreciations to boost exports.

In a recent paper (Ahmed et al. 2015), we use a panel framework covering 46 countries over the period 1996-2012 to formally investigate the questions above. The period of analysis and sample size is determined by the availability of value-added trade data from the OECD-WTO Trade in Value Added (TiVA) database used to assess the role of global value chain integration. We focus on manufacturing exports because of the importance of cross-border linkages in this sector.

We find evidence that the REER elasticity of manufacturing exports has decreased over time. Specifically, the REER elasticity of gross real exports fell in absolute value from an average close to 1.3 in the first half of the period to slightly above 0.6 in the second half. Figure 2 presents estimates of the REER elasticity using 7-year rolling regressions and shows that the decline preceded the Global Crisis, suggesting that it is only in part driven by cyclical factors such as weak global demand. 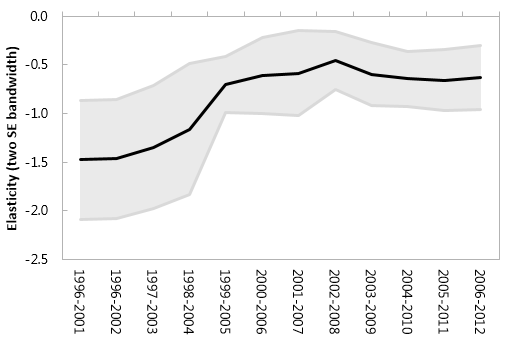 Note: These are the slopes on Real Effective Exchange Rate Change elasticity of manufacturing exports estimated for the different samples in the horizontal axis.

The Role of Global Value Chains

What affects the ability of currency depreciations to boost exports? There are a number of possible explanations including the global trade slowdown (Constantinescu et al. 2015), low pass-through (Berman et al. 2012), and trade policy retaliation (Bown and Crowley 2012). The common theme of these explanations is that they temper the international demand-switching mechanism that underlies the competitive impact of a depreciation.

Our results suggest that the rise in global value chains (backward plus forward linkages) explains on average 40% of the fall of the REER elasticity of exports. For countries with highest participation in supply chains (i.e. in the first 20th percentile in our dataset), this channel explains more than half of the reduction of the exchange rate elasticity over the period of analysis (Figure 3). We also find evidence suggesting that the role of global value chains in dampening the responsiveness of exports to a real depreciation is mainly due to backward linkages, relative to other metrics (i.e. forward linkages and position). These results confirm in a cross section the findings by Amiti et al. (2014) using firm-level data for Belgian firms. 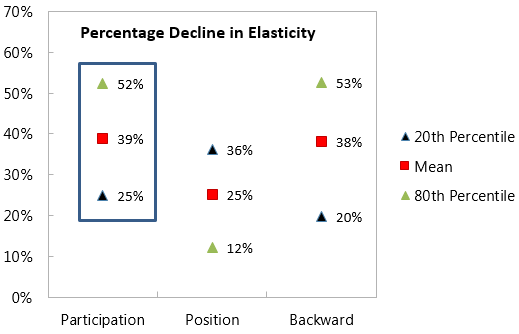 The decline of the REER elasticity of manufacturing exports can be in part explained by the fact that REERs do not properly capture changes in price competitiveness in a world with global value chains. Indeed, using measures of REER that correct for global value chains developed in the literature (Bems and Johnson 2013, Bayoumi et al. 2013, IMF 2013):

• We do not find the same decreasing pattern of elasticity over time. This suggests that the decrease in the REER elasticity is, at least in part, an optical illusion that results from the fact that REER and exports are measured in gross rather than value-added terms.
• We also find that the estimates of the elasticity of value-added exports to both standard REER and value-added REER are smaller than our estimates in gross terms. This is an important point for policymakers since value-added exports matter more for GDP growth than gross exports.

While more work is needed in this area, these findings may indicate that the role of exchange rates in promoting export growth (and, more broadly, export-led growth) and in the macroeconomic adjustment process needs to be carefully re-evaluated in a world where global value chains are increasingly important.

Authors’ note: The views expressed in this paper are those of the authors and do not necessarily represent the views of the IMF or the World Bank, their Executive Boards, or management.