Richard took interest in international frauds years ago, when a good friend of his got taken for a very large amount of money by a scammer. What Richard recognized then was that cross-border con artists fall between regulatory stools. As hard as it is to get domestic regulators to do anything about small and mid-scale financial crooks, it’s even harder to get them out of bed to take on shysters when only one part of the scam-related activity falls in their jurisdiction.

Richard thus started focusing on key elements of the plumbing, such as company registers, because if he could get national regulators to clean them up, it makes it far more difficult for these predators to operate.

What readers may not recognize that Richard’s blog posts (and the considerable work that goes into them) is only a portion of his scam-fighting efforts. Richard also presents his evidence to regulators and keeps after them, and also finds and works with local journalists to get the proof of supervisory neglect into the public eye. Needless to say, Richard has also had to contend with threats from the scammers themselves.

As Richard has become more experienced at tracking frauds, he’s also come across bigger and bigger ones. One of the major venues for those frauds has been GXG Markets, hosting less than upstanding activities that he has chronicled across more than a dozen posts. The high points include:

How a British Carbon Credit Pusher Got a Listing on a Danish Stock Exchange, Brokered by a New Zealand Financial Company Run by an Australian Residing in Switzerland

GXG: How the Scammers Behind Virgin Gold Mining Corporation Bit Off More Than They Could Chew (VI)

Here are the key points from the FT Alphaville post by Paul Murphy, Finally, some action from the Finanstilsynet, which I encourage you to read in full (emphasis theirs):

That’s the Danish financial regulator, of course, which has belatedly closed what had become a European scam-central for listed small-caps. 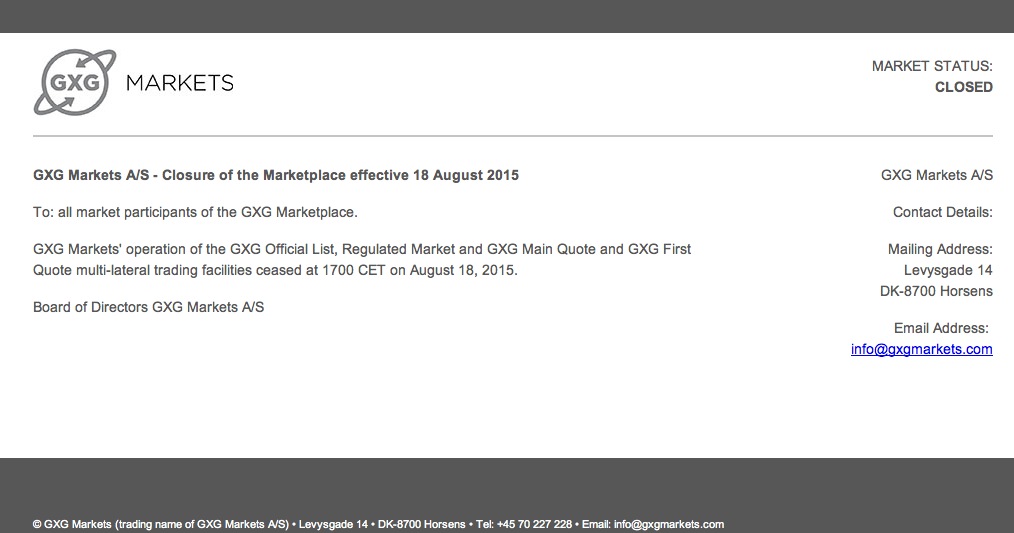 The question remains as to why this allegedly regulated stock market was allowed to continue operating as long as it did — and whether anyone is chasing down the crooks who used it.

GXG began life as Dansk Autoriseret Markedsplads back in 1998. Five years ago it was acquired by Sweden’s GXG Global Exchange Group, with Carl Johan Hogbom, formerly the CEO of the OMX Stockholm Exchange, becoming chairman.

And then, at some point, for some reason, while presenting itself as “the premier stock exchange and growth market for SMEs in the European Union,” the exchange went mad — welcoming all passing carbon fraudsters, rare earth mystics and boiler room operators to use its cheap and largely rule-free platform..

It was largely left to a lone blogger, Richard Smith, posting at Naked Capitalism, to point out what was going on here and demand regulatory action.

Murphy describes how it took the Danish regulator quite a while to rouse itself, and concludes:

We might note, in passing, that a lot of GXG business was conducted through London, so the FCA is sure to be on that end of the matter. No?

But in any case there’s one obvious lesson here that few policymakers or regulators seem ready to acknowledge: the MIFID passporting rules that allow unscrupulous operators to benefit from the City of London’s (relatively) robust regulatory reputation while taking advantage of slack oversight elsewhere in the EU, simply don’t work.

And Richard is getting some long-overdue attention in the Twitterverse:

So the next time Richard posts on a con that has a nexus in the country in which you live, it would be really helpful if you sent a link to the post on to the editor of your local or nearby large-city paper and ask them why are they ignoring a fraud right on their doorstep when a solo foreign blogger can ferret it out?

And in the meantime, congratulations to Richard!