Yves here. This post mines an issue we’ve discussed repeatedly, that the heavy dose of “reforms” imposed on Greece succeeded in lowering wage costs without providing the expected boost in exports. Although the analysis here is helpful, I have to beg to differ with the prescription of “more structural reforms”. First, it’s based on the idea that every country can grow by becoming a net exporter. That won’t work in aggregate. Second, Greece’s export sector is only 25% of GDP, versus over 100% in the case of Ireland.

Other economists have argued that Greece’s economic problems are deep-seated, and rest in large degree in its industrial mix. That means Greece does not need more liberalization. It needs an explicit national economic strategy, and government policies and spending designed to support it.

Analyses and discussions of Greece’s economic situation usually begin—and often end—with its fiscal policy. The policies mandated by the “troika” of the European Commission, the European Central Bank and the International Monetary Fund have undoubtedly resulted in a severe contraction that will continue for at least this year. But little has been said about the private sectors of the economy, and why they have not offset at least part of the fiscal “austerity.” Consumption spending is linked to income, so there is no relief there. But what about the other sources of spending, investment and net exports?

Investment expenditures provide no counterweight, as they have plunged in the years since the global financial crisis. The same phenomenon took place in other countries in the southern periphery of the European Union, but the change in Greece’s investment/GDP ratio between its pre-crisis 2007 level and that of 2014 was an extraordinary decline of 16 percentage points at a time when GDP itself was falling:

{graphs under the fold} 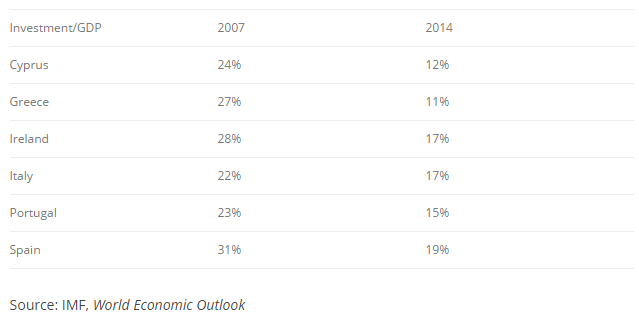 In view of the scale of the crisis, it is not surprising that investment fell as much as it did in these countries. The parlous state of the banks only reinforced the decline. The particularly severe decrease in Greece reflects the political uncertainty there as well as the calamitous economic conditions.

Net exports of goods and services have continued to record a deficit in Greece while the other periphery countries by 2013 showed small (or in the case of Ireland large) surpluses:

Although Greece’s balance continued to show a deficit, the turnaround between 2007 and 2013 of 9 percentage points of GDP was only exceeded by the increase in Ireland’s trade balance by 12 percentage points. But this change was due largely to the decline in imports that accompanied the contraction of the economy rather than a growth in exports, as happened in Ireland and Portugal. The lack of Greek export growth has been surprising in view of the decline in unit labor costs. These had soared in the period leading up to the crisis, as had those in the other periphery countries. Since these countries could not devalue their exchange rates, labor costs had to come down to make their exports competitive. But despite the declines in wages, there has been no corresponding expansion in Greek exports.

Explaining the lack of responsiveness of Greek exports to the decline in wages has been the subject of several analyses. A study on macroeconomic adjustment programs in the Eurozone undertaken for the Economic and Monetary Affairs Committee of the European Parliament by a team of authors that included Daniel Gros, Cinzia Alcidi and Alessandro Giovannini of the Centre for European Policy Studies, Ansgar Belke of the University of Duisberg-Essen, and Leonor Coutinho of the Europrism Research Centre claimed: “Greek exports price competitiveness has not improved nearly as much as its cost (and wage) competitiveness…” The report’s authors attribute the rigidity in prices to “structural deficiencies.”

A similar analysis was offered by Uwe Böwer, Vasiliki Michou and Christph Ungerer of the European Commission’s Directorate-General for Economic and Financial Affairs (see also here). They use a gravity model to predict export flows in 56 countries, and compare the predictions of the model with actual exports. Greek exports were 32.6% lower than those predicted by the model, which they label the “puzzle of the missing Greek trade.” They then add measures of institutional quality to their model, and find that these are quite significant. Since Greece’s institutional quality is seen as relatively poor, the authors claim this deficiency contributes to the lack of exports.

In view of all the institutional measures that have already been introduced into the Greek economy, it may seem surprising that more structural reform is seen as necessary. Alessio Terzo of Bruegel has argued that the initial reforms in Greece were slanted towards reform of the public sector rather than the private sector. Some of this shortfall was rectified in the 2012 program, but implementation was slowed by the political climate and economic collapse. A lack of coordination with changes in labor market practices has resulted in a decline in wages that has not been matched by corresponding adjustments in prices. Terzo claims that responsibility for these flaws in program design is a responsibility of the troika as well as of the Greek government.

Designing the optimal composition and pace of structural reforms is always difficult. Antionio Fatás of INSEAD writes about the record of reform in Europe since the 1970s (see also here). He shows that there has been a convergence of policies and institutions over time. He takes particular note of Greece and Portugal’s progress vis-à-vis the record of other OECD countries in business-related reforms, although he also notes that small differences are associated with noticeable differences in productivity and output. Christian Thimann of the Paris School of Economics and AXA Group believes that there is substantial scope for further change.

Can reforms be implemented when fiscal policy is contractionary? Tamim Bayoumi of the IMFadmits that the short-run impact of regulatory changes is likely to be disruptive, which only reinforces the impact of the fiscal policy. Under these circumstances, the IMF can play a critical role in providing external financing while reforms are being implemented. But, he writes, “…structural policies need a strong leader and broad agreement across a wide swath of opinion makers about the need to re invigorate the economy.”

Such an agreement is difficult to achieve in the wake of a crisis. Atif Mian of Princeton, Amir Sufi of the Booth School of Business at the University of Chicago and Francesco Trebbi of the Vancouver School of Economics have shown that countries become more polarized after a financial crisis as voters become more ideologically extreme and ruling coalitions become weaker. This makes consensus much harder to achieve.

The latest bailout provides an opportunity to change the structure of Greece’s private sector. Consumer markets are to be liberalized, labor practices to be reviewed and an upgrade of its infrastructure to be taken. Can Prime Minister Alexis Tsipras maintain the popular support needed to implement the reforms? And can these lead to a turnaround in the Greek economy? The private sector must become viable if the country’s continuing economic degradation is to end. It would be ironic if such a turnaround occurred during the administration of a political leader who campaigned on a platform of defying the troika and its programs, including structural reform measures. But “a foolish consistency is the hobglobin of little minds, adored by little statesmen and philosophers and divines…”

crossposted with Capital Ebbs and Flows