The International Monetary Fund (IMF) has taken sides in the homicide trial of Nadia Savchenko, a Ukrainian military volunteer who is standing trial in Russia for the murder last year of two Russian journalists reporting on the conflict in eastern Ukraine.

Jerome Vacher, the resident representative of the IMF in Kiev, appeared at the Ukraine art pavilion at the Venice Biennale, at the official opening sponsored by the Ukrainian oligarch Victor Pinchuk. The event took place on Thursday, May 7, and Vacher was there at the invitation of the Pinchuk Art Centre. The day was a regular working day in the Ukraine office of the IMF, and at IMF headquarters in Washington, DC. Pinchuk’s insolvent Ukrainian bank and steel company are beneficiaries of the current multi-billion dollar IMF loan to Ukraine, the disbursement of which Vacher is responsible for supervising.

Vacher was photographed in his official role as “chief of the IMF mission” carrying a placard in the Ukrainian colours which is part of the Savchenko-support campaign – motto “Hope Nadia” — being conducted by partisan political elements in Ukraine. The Pinchuk Art Centre has published its photograph of Vacher (lead image), along with 34 others, at this link.

According to the Pinchuk website and the caption published with his picture, Vacher was an invited guest at the “Official opening of ‘Hope!’, the Pavilion of Ukraine at the 56th International Art Exhibition – la Biennale di Venezia, and ‘Okean Elzy’ concert. Photos below are open for usage by mass media. To download a high res photo, click a preview, then click a link «Save in high resolution» in window’s lower right corner. When using photos, please, note copyright information. Photographs provided by the PinchukArtCentre © 2015. Photographed by Sergey Illin.”

For Vacher’s trip to Venice the expenses appear to have been paid by Pinchuk entities.

In his official capacity representing the IMF, Vacher has been the guest of other Pinchuk entities at events promoting partisan political views, as well as Pinchuk’s interests. Vacher is listed in his IMF role as a “participant” at the Pinchuk-funded Yalta European Strategy (YES) conference in 2013. 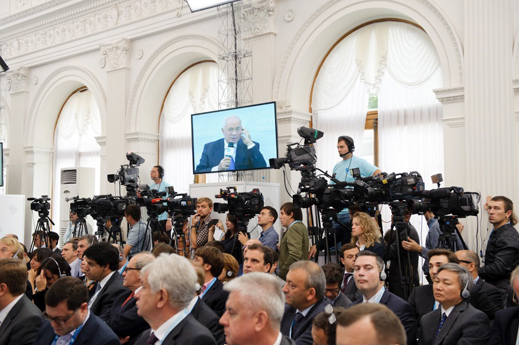 Vacher was also an official participant at the YES conference in 2014. 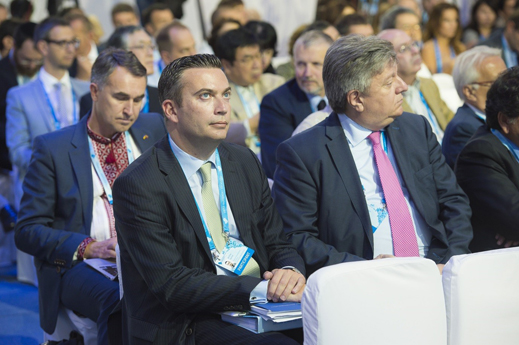 Vacher (centre) at Pinchuk’s YES conference in Kiev, September 11, 2014. By then the IMF money had started to flow into Bank Dnepr Credit, and Vacher had been upgraded in the YES seating hierarchy to the second row, just behind Pinchuk himself.

Pinchuk’s struggling bank, Bank Dnepr Credit, is a beneficiary of IMF payments to the Ukrainian banking system through the National Bank of Ukraine. It is also subject to Vacher’s recommendations to the IMF team supervising the Fund’s requirement that insolvent Ukrainian banks should be recapitalized by their shareholders. For that story, read this.

Pinchuk’s steel company Interpipe is in default on debts of more than $1 billion to the Ukrainian government, several international banks, the Italian government credit agency SACE, and private bondholders. According to a bondholder in Europe, Vacher’s closeness to Pinchuk raises “concern for a potential conflict of interest on whether IMF rules for collecting Interpipe’s overdue taxes and raising its energy bill will be modified to benefit Mr. Vacher’s relationship with Mr. Pinchuk.”

The Code of Conduct for IMF Staff explicitly bars conflicts of interest; the use of official IMF time on private or partisan activities; acceptance of gifts or favours worth more than $100; and engagement in political activities without express permission by the Fund. The code also instructs its officials: “You should not, without authorization, provide to the news media, publish, or make public statements relating to the policies or activities of the IMF or to any national political question.”

The Savchenko case has been a controversial political issue in both Ukraine and Russia for more than a year. A Ukrainian helicopter operator, Savchenko (below, right) was captured following military operations in the Lugansk area, and charged with criminal culpability in the deaths of two Russian television reporters, Igor Kornelyuk (left) and Anton Voloshin (centre), on June 24, 2014.

The international Committee to Protect Journalists has reported their deaths this way. The circumstances have been reported by the Russian media in greater detail. According to the Russian prosecution, Savchenko was a volunteer fighter in the Aidar battalion, an ideological formation associated with the Ukrainian Defense Ministry and accused internationally of war crimes and neo-Nazism. Savchenko is charged with providing firing coordinates for the journalists’ position to a mortar unit which killed them. Nadia is a diminutive for her first name Nadezhda; in Russian nadezhda, but not Nadia, also means “hope”. In Ukrainian the words make a pun.

In July Russian prosecutors finalized the indictment against Savchenko for multiple homicide, attempted murder, and illegal crossing of the Russian border. A court in Rostov-on-Don will commence trial at a date yet to be fixed. In the meantime Savchenko is in prison at Novocherkassk, in Rostov region. She is pleading not guilty.

The IMF staff code requires IMF officials, including Vacher, to “certify, according to a periodicity and in a form to be prescribed by the Managing Director, that they have read the policy on conflicts of interest and that they are in compliance.”

Last week Vacher removed his Facebook publications after they disclosed approbative relationships with Ukrainian government officials. After his Facebook disclosures were revealed, Ukrainian Finance Minister Natalie Jaresko removed one of her Facebook publications. For that story, read this. Vacher and the IMF refused to say whether or when Vacher had last signed his compliance with the staff code. The IMF claimed Vacher’s Facebook and Twitter publications were “considered a personal matter”. That’s not exactly what Vacher himself believes. For what Vacher calls his “private” internet communication, including posts, photographs and videos, try JVacher1, his Instagram call-sign.

On Wednesday morning, through her chief spokesman Gerry Rice and her spokesman for Ukraine, Olga Stankova, the managing director of the IMF Christine Lagarde was asked five questions to clarify the circumstances of Vacher’s sponsored trip to Venice, his political demonstration in favour of Savchenko, and his acceptance of freebies from Pinchuk:

“1. Was Mr Vacher’s time official time? Your refusal to answer will be reported to mean your affirmation.

2. Was Mr Vacher compensated by an entity associated with Mr Victor Pinchuk for his trip to Venice, his accommodation and expenses? Your refusal to answer will be reported as your affirmation.

3. Does the IMF endorse Mr Vacher’s display of the political demonstration and placard known as “Hope Nadia”? Your refusal to answer will be reported as your affirmation.

4. Does Managing Director Lagarde and the IMF management endorse Mr Vacher’s published view that Nadia Savchenko is not guilty of the murders for which she has been indicted and for which she is standing trial in Russia? Your refusal to answer will be reported as your affirmation.

5. Does the IMF condone the potential for conflict of interest in Mr Vacher’s acceptance of favour from Mr Pinchuk, control shareholder of Bank Dnepr Credit and Interpipe? Your refusal to answer will be reported as your affirmation.”

Lagarde and her spokesmen replied: “Mr. Vacher was on personal leave on May 7. We have nothing else to offer on your other questions.” Vacher refused to reply.

A Russian banker who served at the IMF in the 1990s was asked what evidence he had encountered at the Fund of prejudice and Russophobia. “That was the period when Russia behaved to the expectation of people in Washington,” he replies. “That is, it was doing all the ‘right’ things: destroying its economy and society, withdrawing from everywhere, abandoning its allies, renouncing any foreign strategy, stupidly repaying Soviet-era debts, undermining its defense capability, humiliating the army, etc. So the tone towards Russia and towards us was quite benevolent, almost friendly. There was no overt Russophobia, except that driven by the paranoia of former Soviet Union republics, especially in the Baltics.”