An explosive story reported by Inside Climate News, an award-winning climate organization, and Frontline, reveals that Exxon knew as early as 1977 that earth’s climate was being seriously disrupted, and would continue to be disrupted, by carbon dioxide emissions, and yet in the 1980s they pivoted to financing an aggressive climate denial effort anyway.

That denial effort continues to this day, financed through the American Petroleum Institute and fronted by actress Brooke Alexander (whom I’ve called “Lying Pantsuit Lady“). 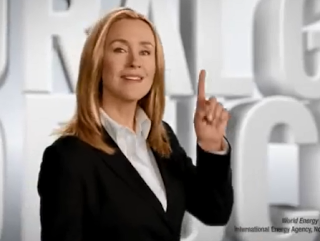 Actress Brooke Alexander, API’s iconic spokesperson. Here she proudly says the U.S. is the number one producer of methane, a greenhouse gas that, when burned, converts to CO2, another greenhouse gas (commercial here).

The report, the first of a series, is described this way by Inside Climate News:

After eight months of investigation, InsideClimate News presents this multi-part history of Exxon’s engagement with the emerging science of climate change. The story spans four decades, and is based on primary sources including internal company files dating back to the late 1970s, interviews with former company employees, and other evidence, much of which is being published here for the first time.

Here’s just a bit from that lead report at ICN (my emphasis):

Exxon: The Road Not Taken

Top executives were warned of possible catastrophe from greenhouse effect, then led efforts to block solutions.

At a meeting in Exxon Corporation’s headquarters, a senior company scientist named James F. Black addressed an audience of powerful oilmen. Speaking without a text as he flipped through detailed slides, Black delivered a sobering message: carbon dioxide from the world’s use of fossil fuels would warm the planet and could eventually endanger humanity.

“In the first place, there is general scientific agreement that the most likely manner in which mankind is influencing the global climate is through carbon dioxide release from the burning of fossil fuels,” Black told Exxon’s Management Committee, according to a written version he recorded later.

It was July 1977 when Exxon’s leaders received this blunt assessment, well before most of the world had heard of the looming climate crisis.

A year later, Black, a top technical expert in Exxon’s Research & Engineering division, took an updated version of his presentation to a broader audience. He warned Exxon scientists and managers that independent researchers estimated a doubling of the carbon dioxide (CO2) concentration in the atmosphere would increase average global temperatures by 2 to 3 degrees Celsius (4 to 5 degrees Fahrenheit), and as much as 10 degrees Celsius (18 degrees Fahrenheit) at the poles. Rainfall might get heavier in some regions, and other places might turn to desert.

“Some countries would benefit but others would have their agricultural output reduced or destroyed,” Black said, in the written summary of his 1978 talk.

If you think this adds up to “They knew,” you’d be right. They knew back in 1977, in fact. And they acted like they knew:

Exxon responded swiftly. Within months the company launched its own extraordinary research into carbon dioxide from fossil fuels and its impact on the earth. Exxon’s ambitious program included both empirical CO2 sampling and rigorous climate modeling. It assembled a brain trust that would spend more than a decade deepening the company’s understanding of an environmental problem that posed an existential threat to the oil business.

At the time, they saw a business reason, as well as an “ethical” one, for the proactive and pro-science stance they were taking:

In the early 1980s Exxon researchers often repeated that unbiased science would give it legitimacy in helping shape climate-related laws that would affect its profitability.

But that came to an end:

Then, toward the end of the 1980s, Exxon curtailed its carbon dioxide research. In the decades that followed, Exxon worked instead at the forefront of climate denial. It put its muscle behind efforts to manufacture doubt about the reality of global warming its own scientists had once confirmed. It lobbied to block federal and international action to control greenhouse gas emissions. It helped to erect a vast edifice of misinformation that stands to this day.

As noted, the number of documents the reporters accessed was very large. More on those files:

This untold chapter in Exxon’s history, when one of the world’s largest energy companies worked to understand the damage caused by fossil fuels, stems from an eight-month investigation by InsideClimate News. ICN’s reporters interviewed former Exxon employees, scientists, and federal officials, and consulted hundreds of pages of internal Exxon documents, many of them written between 1977 and 1986, during the heyday of Exxon’s innovative climate research program. ICN combed through thousands of documents from archives including those held at the University of Texas-Austin, the Massachusetts Institute of Technology and the American Association for the Advancement of Science.

The documents record budget requests, research priorities, and debates over findings, and reveal the arc of Exxon’s internal attitudes and work on climate and how much attention the results received.

Many of those documents are available here.

As I said, this is explosive and detailed. I haven’t touched on the degree to which Exxon financed its own research, including the outfitting of a state-of-the-art supertanker to take air and sea temperature measurements, or the assembly of “a team of climate modelers who investigated fundamental questions about the climate’s sensitivity to the buildup of carbon dioxide in the air.”

I want to send you instead to ICN for the full piece. It’s well written, detailed and easy to grasp. If you’re at all concerned about climate change, this is a must-read, and it will get you set up for the follow-up reports.

For more from the report, watch the brief Frontline video below:

Are Lawsuits a Possibility?

If they knew, they still know. They’ve certainly knowingly misled the public, lied and done harm for financial gain. Do you think this has lawsuit written all over it? After all, this worked:

If they misled the public, have they misled, and perhaps defrauded, their investors as well? I’ve privately heard of at least one well-placed and climate-aware congressperson who wondered if federal RICO prosecutions might be an option, though the (next) President would have to be very aggressive-minded to consider them — or the next Attorney General, in case we return to the pre-Bush era of independent attorneys general.

I’ll have more on this story, including Exxon’s response. I’ve said it’s going to take force. This opportunity, if it’s taken, counts as force.