This is Naked Capitalism fundraising week. 1119 donors have already invested in our efforts to combat corruption and predatory conduct, particularly in the financial realm. Please join us and participate via our donation page, which shows how to give via check, credit card, debit card, or PayPal. Read about why we’re doing this fundraiser, what we’ve accomplished in the last year, and our fifth target, more original reporting.

Yves here. The problem of China’s private debt bubble keeps festering away in the background. Readers may recall that there was a flurry of concern early in 2014 as some wealth management products, a big part of China’s shadow banking system, started looking wobbly. From a January post:

The big source of worry isn’t just the level of debt but its structure, meaning the explosion of the shadow banking system. Bloomberg gives a good overview, in Shadow Banking Risks Exposed by Local Debt Audit. It’s important to keep in mind that bulk of government spending takes place at the local level, which accounts for 80% of expenditures even though it collects only 40% of total tax revenues. Borrowing, which finances local development projects, makes up the difference. But it’s not straightforward borrowing: “Local governments have set up more than 10,000 financing vehicles to fund projects such as subways and airports because regulations limit their ability to borrow money directly.” And the rise has been explosive:

China’s audit of local governments exposed an increased reliance on shadow banking, swelling the risk of default on 17.9 trillion yuan ($3 trillion) of debt…

“As banks tightened their purse strings, local governments had no choice but to resort to shadow banking and incur more expensive borrowing costs,” said Tang Jianwei, a Shanghai-based economist at Bank of Communications Co., the nation’s fifth-largest lender. “That will further constrain their repayment ability and eventually overwhelm some lower-level entities which have borrowed way beyond their means. I won’t rule out some defaults in 2014.”

Premier Li Keqiang is cracking down on less-regulated shadow banking activities, estimated by JPMorgan Chase & Co. at $6 trillion in May last year, while the central bank engineered a cash crunch in June 2013 to push deleveraging in the world’s second-largest economy. ….

[G]rowth in bank loans to local governments slowed to 19% to 10.1 trillion yuan from the end of 2010 to June 30, 2013, compared with a 67% jump in total debt, audit data showed. Trust financing to LGFVs surged to 1.4 trillion yuan from zero and bond issuance more than doubled to 1.8 trillion yuan.

Local government debt rose by nearly 2/3 in under three years, with the growth concentrated in the shadow banking sector.

Liabilities at non-financial companies may rise to more than 150% of gross domestic product in 2014, raising default risks, according to Haitong Securities Co. The ratio of 139% at the end of 2012 was already the highest among the world’s 10 biggest economies, according to the most recent data. That compares with 108% in France, 103% in Japan and 78% in the U.S., figures from the Bank for International Settlements and the World Bank show.

“We are concerned that the debt snowball may get bigger and bigger and turn into a crisis,” Li Ning, a Shanghai-based bond analyst at Haitong Securities, said in an interview on Jan. 3. “Default probabilities from next year may rise because more and more Chinese companies depend on new borrowings to repay old debt.”

Back to the current post. The next outbreak of serious financial press and pundit concern about China took place earlier this year, over its stock market gyrations. That was troubling due to the fact that China’s equity markets are highly geared by international standards, meaning a crash would have much greater ramifications for the real economy than, say, our dot-bomb era did. Jayati Ghosh explained in August that the rapid runup in Chinese stocks in 2015 was no accident but was a last-ditch measure to keep the Chinese growth party going:

The recent rout in the Chinese stock market – and the Chinese authorities’ increasingly panicky responses to it that temporarily halted the decline – may not seem all that important to some observers….But this relatively benign approach misses some crucial points about how the Chinese economy has changed over the past few years…

Some of this has to do with real economic processes. The export-led strategy that had proved so successful over two decades received a big shock in 2008 and pointed to the need to generate more domestic sources of demand. But instead of focussing on stimulating consumption through rising wage shares of national income (which could eventually have threatened the export-driven model) the Chinese authorities chose to put their faith in even more accumulation to keep growth rates buoyant. So the “recovery package” that the Chinese government out in place in the wake of the Great Recession of 2008-09 was essentially one that encouraged more investment, in an economy in which investment rates already accounted for close to half of GDP. The stimulus measures encouraged provincial governments and public sector enterprises to borrow heavily and invest in infrastructure, in construction as well as in more productive capacities even though it was becoming evident that there had clearly been excessive capacity creation in the previous period. They also encouraged much more active interest in the real estate sector, which became the driver of China’s growth in the recent period.

Much of this investment was on the basis of money borrowed from the public sector banks that had dominated the financial landscape in China. But as the real estate sector started showing signs of a major bubble, banks were restricted from putting much more money into such loans, and there were also caps on their deposit and lending rates. This encouraged the growth of a “shadow banking” sector that emerged as a form of regulatory arbitrage, as various trusts and non-bank financial institutions created “wealth management products” to offer higher returns to savers and provided financing for real estate and construction, fuelling the property boom. Surprisingly, the authorities turned a blind eye to such developments – and even implicitly encouraged them, allowing banks to lend money to such financial institutions and thereby get indirectly implicated in this process.

The result has been a dramatic explosion of debt in just a few years. Between 2007 and 2014, total debt in China (in absolute Renminbi terms) went up four times, and the debt- GDP ratio nearly doubled. At around 282 per cent of GDP, this makes debt in China relatively much larger than in, say, the United States. Corporate debt increased to reach 125 per cent 2 of GDP; provincial governments are also highly leveraged for infrastructure investment; and debt held by households has gone up nearly threefold to a hefty 65 per cent of GDP. Fully half of the debt (much of it coming from the unregulated shadow banking institutions that were allowed to flourish) was oriented directly or indirectly towards the real estate market and housing finance, fuelling property bubbles in major Chinese cities that began to burst around a year ago.

We know what happens when the value of the underlying asset falls: this affects the capacity to repay, as the US housing market in 2006-08 vividly illustrated. The housing bubble began to subside from early 2014: total property sales fell by nearly 8 per cent in that year, and new land purchases by developers have fallen by nearly one-third in the first quarter of 2015 compared to the same period the previous year. The index of housing prices for 70 cities shows that average new home prices dropped nearly 10 percent by May 2015 compared to the beginning of 2014.

The subsiding of the froth in the housing market led to investor focus on the stock market, which then began to sizzle. The past year showed how irrational such markets can be, as stock market indices went up by more than one and a half times in around a year, reaching a peak in early June. For some stocks, the price-equity values crossed 200. This was clearly crazy and begged for a correction, which was bound to happen. But that correction was untidy in the extreme….

Thereafter, there has been some stabilisation, although this is clearly artificially created and the market is likely to remain jittery for some time. In any case, the inflated stock prices have still not come down to what could otherwise be called reasonable levels given the crazy increases during the bubble phase, and so there may be more “correction” required. This has created a problem for the Chinese state, whose aura of economic omnipotence has taken a severe battering, because it is no longer clear how exactly they should best deal with this situation. Having talked up the stock market, extolled it as a sign of China’s growing economic strength and encouraged much greater participation in it by relatively small retail investors who are now suffering, they will find it difficult to allow it to decline any further, yet may be powerless to prevent it in the medium term…

More significantly, this asset deflation hitting both real estate and stocks comes in the context of an overall slowdown in GDP growth driven by poor export performance in the past year, which is already having negative multiplier effects across the economy. The Chinese government has cut interest rates four times since November and launched a slew of stimulus efforts to shore up economic growth

Our analysis shows that:

On the current trajectory, we doubt the market can stay stable beyond a few quarters, especially if some SOE and/or LGFV bonds indeed default.

When a developer can issue a 5y bond at 3bp lower than 5y quasi-sovereign CDB bond’s yield, the market appears grossly mispricing risks in our view. Credit spreads of LGFV, corp. and enterprise bonds are all at or close to five-year lows at the moment. 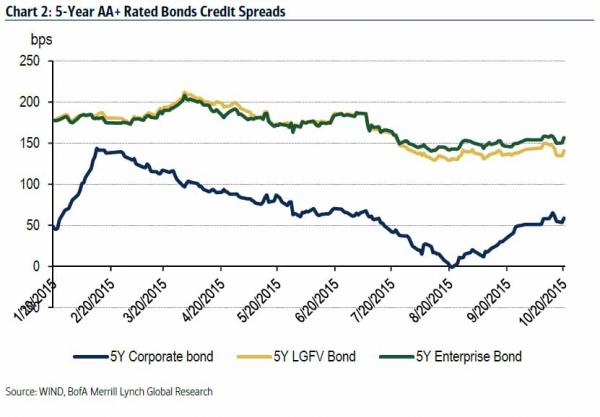 Investors are chasing yield, due to rapid money expansion (M2 at 13.1% in Sept vs. 6.2% nominal GDP growth in 3Q). AUM of bond and money market mutual funds expanded by Rmb1.6tr Jan-Sept and by Rmb1.3tr alone since July after the A-share correction vs. Rmb44.1tr bond outstanding as of Sept. 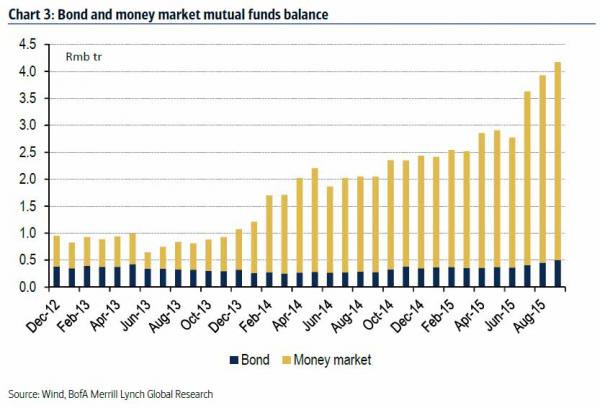 Moral hazard is playing a key role – there is no official default so far in the bond market other than some small SME bonds. Credit spreads narrowed on most occasions when major bond default threats surfaced, suggesting that most investors probably counted on bail-outs (Chart 5-7). Meanwhile, about 2/3 of repos are on less than 7-day term. 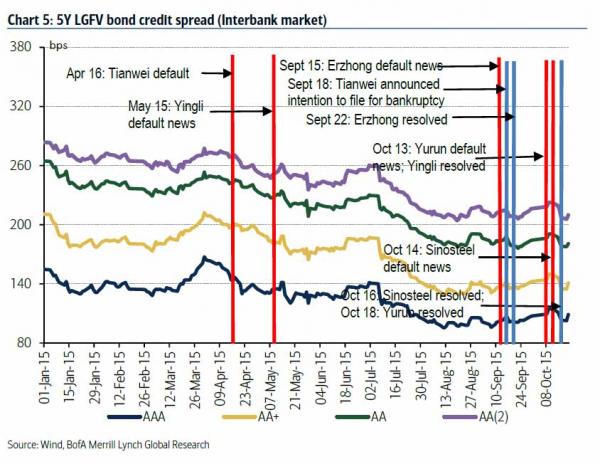 Chinese “markets” are really warped. When default risk triggers bond buying you know you’re stuffed. Anyway, if the bubble does go then we can expect to see even more rate cuts and greater pressure on the yuan to fall again.

Yves again. And more downward movement of the yuan means that China is exporting deflation. Not only is that hitting commodities producers and countries in the region, but deflationary pressure are increasingly exacting a toll on the US, as a New York Times story, A Global Chill in Commodity Demand Hits America’s Heartland, described over the weekend. The Chinese have managed to fend off the sort of hard landing that close China watchers like Jim Chanos have anticipated for some time, but how long they can keep debt-fuelled growth going without producing an uglier crack-up remains to be seen.