This is Naked Capitalism fundraising week. 124 donors have already invested in our efforts to combat corruption and predatory conduct, particularly in financial realm. Please join us and participate via our Tip Jar, which shows how to give via check, credit card, debit card, or PayPal. Read about why we’re doing this fundraiser, what we’ve accomplished in the last year, and our first target, funding for digital infrastructure and user improvements. 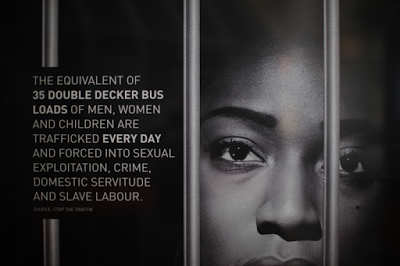 This could be someone you know and love (source). How aggressively should your presidential candidate work to prevent it?

As many readers know, I’m a fan of what the game of Go calls a “strong move” — very aggressive play when the position is favorable. The position against TPP, the argument against, is beyond favorable, and the position against Malaysia, one of the world’s worst participants in the traffic in slaves, is unassailable. In addition, for the 2016 race, progressives have three candidates who have announced their opposition.

In this presidential season, I think progressives have been handed a wonderful opportunity to make a “strong move” against both TPP and slave trafficking — but only if they’re willing to take it.

In this piece, I want to look at the slave trade and Malaysia, then at TPP, both pre-vote and post-vote, and last at what a truly committed Democratic candidate might say in one of the coming debates. (To jump to that speech, scroll to the bottom or click here.)

“Human Trafficking” Means the Slave Trade in All Its Forms

The term “human trafficking” is accurate, but almost a white-wash in that it washes off the ears with little penetration of its meaning. Human trafficking is best called “slave trading.” What are slaves? Humans used as animals, as things for any purpose, including, but not only:

That list is just a subset. Any Jack Reacher–villain method by which a human, including a child, can be kept powerless for the purpose of abuse is encompassed by the term slave trading. From the Universal Declaration of Human Rights, on the ban against exploitation of humans:

Exploitation shall include, at a minimum, the exploitation of the prostitution of others or other forms of sexual exploitation, forced labour or services, slavery or practices similar to slavery, servitude or the removal, manipulation or implantation of organs;

The “trader” makes his or her money capturing or selling slaves, the way Nestlé, say, makes money “capturing” water from the people of the Pacific Northwest, then selling it back to the people who own it in the first place. Water is a product to profit from. Slaves are a product to profit from. How can we improve the bottom line by improving the “throughput,” these profiteers ask?

Imagine your child treated this way, as a profit center and “throughput.” Now imagine your anger against it. Now hold that thought as you consider Malaysia and TPP. Malaysia is a nation in which slave trading is a major industry.

In 2014, the State Department Gave Malaysia an “F” for its Extensive Human Trafficking

Back in 2014, before Fast Track and TPP were part of the national discussion, the nation of Malaysia received an “F” from the U.S. State Department (technically, they assigned Malaysia “Tier 3” status) for its extremely lax enforcement of laws against trading in slaves.

The Guardian (my emphasis):

The US has downgraded Malaysia to the lowest ranking in its annual human trafficking report, relegating the southeast Asian nation to the same category as Zimbabwe, North Korea and Saudi Arabia. The move could result in economic sanctions and loss of development aid.

Malaysia’s relegation to tier 3 in the US state department’s Trafficking in Persons (TiP) report – published on Friday – indicates that the country has categorically failed to comply with the most basic international requirements to prevent trafficking and protect victims within its borders.

Human rights activists in Malaysia and abroad welcomed the downgrade as proof of the government’s lax law enforcement, and lack of political will, in the face of continued NGO and media reports on trafficking and slavery.

“Malaysia is not serious about curbing human trafficking at all,” said Aegile Fernandez, director of Tenaganita, a local charity that works directly with trafficking victims.

“The order of the day is profits and corruption. Malaysia protects businesses, employers and agents [not victims] – it is easier to arrest, detain, charge and deport the migrant workers so that you protect employers and businesses.”

According to this year’s TiP report – which ranks 188 nations according to their willingness and efforts to combat trafficking, and is considered the benchmark index for global anti-trafficking commitments – trafficking victims are thought to comprise the vast majority of Malaysia’s estimated 2 million illegal migrant labourers, who are sent to work in the agriculture, construction, sex, textile or domestic labour industries.

Just read the bolded parts again. The government of Malaysia, our TPP partner, is a major participant in the market for slaves. According to our own State Department.

But that was then, before the push to “fast track” trade deals that the most corrupt members of both political parties wanted to give to their richest benefactors. Here’s what’s happened since.

The State Department issued the above report in 2014. In 2015 Obama and the wealth-serving members of both political parties wanted to pass Fast Track, a law that would make it much more difficult for Congress to reject any “trade” deal, or any deal labeled a trade deal for the next three to six years. One obstacle to passing Fast Track was congressional opposition to the slave trade in Malaysia, one of our TPP “partners.”

The pro-TPP forces in and out of government desperately wanted to keep Malaysia in the deal, for a variety of reasons. So “senior political staff” in the State Department conveniently amended the department’s 2014 decision.

In the weeks leading up to a critical annual U.S. report on human trafficking that publicly shames the world’s worst offenders, human rights experts at the State Department concluded that trafficking conditions hadn’t improved in Malaysia and Cuba. And in China, they found, things had grown worse.

The State Department’s senior political staff saw it differently — and they prevailed.

A Reuters examination, based on interviews with more than a dozen sources in Washington and foreign capitals, shows that the government office set up to independently grade global efforts to fight human trafficking was repeatedly overruled by senior American diplomats and pressured into inflating assessments of 14 strategically important countries in this year’s Trafficking in Persons report.

In all, analysts in the Office to Monitor and Combat Trafficking in Persons – or J/TIP, as it’s known within the U.S. government — disagreed with U.S. diplomatic bureaus on ratings for 17 countries, the sources said.

The analysts, who are specialists in assessing efforts to combat modern slavery – such as the illegal trade in humans for forced labor or prostitution – won only three of those disputes, the worst ratio in the 15-year history of the unit, according to the sources.

As a result, not only Malaysia, Cuba and China, but countries such as India, Uzbekistan and Mexico, wound up with better grades than the State Department’s human-rights experts wanted to give them, the sources said. (Graphic looking at some of the key decisions here: reut.rs/1gF2Wz5)

Note that the experts in the State Dept. didn’t re-evaluate the data. The political forces at State overruled those experts, for reasons you can easily guess. In the case of Malaysia, Reuters says this:

The Malaysian upgrade, which was highly criticized by human rights groups, could smooth the way for an ambitious proposed U.S.-led free-trade deal [TPP] with the Southeast Asian nation and 11 other countries.

Reuters certainly knows how to put two and two together. Will our Democratic political candidates do the same?

Which Presidential Candidate Will Stand Strongest Against TPP & Human Trafficking in Malaysia?

Which brings us to TPP and this political season. One of the big issues for progressives is to elect the most progressive president we can find. Another is to defeat TPP in Congress. A third — have you thought of this? — is to neuter TPP even if it passes Congress and Obama signs it.

After all, TPP is just an “executive agreement.” It’s not a “treaty” as the Constitution understand the term. It’s not ratified by a two-thirds vote of the Senate, but simply signed by the president, often with a concurring vote of Congress. (A Status of Forces Agreement, for example, is “[t]ypically established by executive agreement.”) Even our actual treaties, such as the Geneva Convention’s prohibition against torture, are often simply ignored. Do we stop fighting a bad deal simply because it was signed? Or do we keep fighting? And what do we expect in that regard from our best candidates?

These three problems — how to elect the most progressive president, how to stop TPP from being passed by Congress, how to prevent TPP from taking effect if it is approved by Congress — come conveniently together in this presidential season, and in particular, in the upcoming. presidential debates.

This is another of my imagined progressive-candidate speeches, laid out as talking points in the candidate’s voice. Imagine the horror that millions of human slaves in Malaysia go through every day. Imagine your child as one of them. Then imagine your reaction to a presidential candidate who says this, out loud, in front of millions of TV viewers:

The moderator has asked each of us our views on TPP. Here’s what I say to the American people:

Now imagine someone you love as a victim of human trafficking in Malaysia.

If you are on board with all three goals — and share the revulsion any human would feel toward a business model that treats humans as things — how would you feel about the presidential candidate who gave the speech above?

But there’s more to this “strong move.” How would our current trading “partners” feel about TPP if they heard this speech given, ahead of the Congressional vote?