By Nicholas Shaxson, the author of Treasure Islands, an award-winning book about tax havens. Originally published at Fool’s Gold 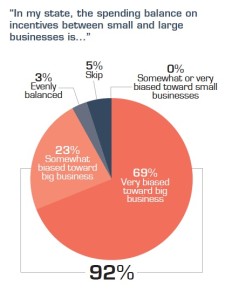 Recently we have written about how supposedly ‘competitive’ national policies on tax and the financial sector in Britain tend to favour large multinational firms over smaller, more locally-based ones, and how they also tend to lead to less competition in markets too.

This is the result of what we sometimes call the “Competitiveness Agenda”, which pushes the idea that you have to pamper and give subsidies to mobile capital, for fear that it will flee to more hospitable jurisdictions. Of course the firms that are most able to flee (or partly flee) to foreign jurisdictions are naturally the internationally-focused ones – and that usually means larger multinational corporations. The smaller locally-focused ones, which are most wholly embedded in the local economy won’t generally flee.

The result is that this ratchets up the tendency for the big to overwhelm the small, based on factors (such as tax breaks) that have nothing to do with wealth creation and everything to do with unproductive wealth extraction.

This morning Good Jobs First in the United States have published an important new report entitled In Search of a Level Playing Field: What Leaders of Small Business Organizations Think About Economic Development Incentives. Its findings very much reflect the workings of the Competitiveness Agenda.  Its summary states:

Beyond greater access to capital, respondents next said they favor community investments that benefit all businesses and grow the local consumer base. Of greatest benefit to their member businesses, they said, are workforce, transportation and education investments.”

And those core factors, of course, all require tax — not tax breaks. And of course subsidies to big business are not neutral for small businesses: they are actively harmful. As one of the respondents in the new survey put it:

“We’re not necessarily looking for any incentives from the state; we just don’t want to see incentives going to large businesses to the detriment of the state and small businesses.”

Our emphasis here highlights two separate channels for harm from these incentives: loss of state functions, plus the help given to big businesses that enables them to crowd out the small. Another quote highlights a third source of harm:

“We oppose funding that goes out of the community by attracting global corporations that will leave after their incentive is finished.”

In a word, leakage.

Although this particular report does not get very explicitly into ‘competitiveness’ arguments, the authors have weighed in on this issue many times in the past — as they’ve described it:

“Worse than zero-sum, this is a net loss game, with footloose companies shrinking the tax base necessary for the education and infrastructure investments that benefit all employers.”

Amanda Ballantyne, the National Director for the Main Street Alliance, a major association of small business owners, captures much of the trouble:

Small business owners need more customers in their stores, purchasing the products and services that they sell. For this reason, we need more investment in our communities, and policies that ensure that more customers have stable jobs, earn decent wages, and have access to the benefits they need to keep their families healthy and economically secure. Those policies ensure a strong customer base for local small businesses. We know that Main Street businesses thrive when the customers in their communities are also thriving.”

On this latter subject — the relationship between corporate tax breaks and demand in an economy — we’ll be writing more, shortly. (For a taster of that, see point Seven (on p14) of the document Ten Reasons to Defend the Corporate Income Tax.)