By Ann Pettifor, a Director of Policy Research in Macroeconomics (PRIME), Honorary Research Fellow at the Political Economy Research Centre at City University (CITYPERC) and a fellow of the New Economics Foundation, London. Originally published at PRIME Economics

What is deflation? What has caused inflation to fall? And why is there no such thing as ‘good deflation’?

On Monday the Office of National Statistics (ONS) announced that inflation at 0.5% was lower than the 1% rise that had been predicted by the Bank of England as recently as November. And it was lower than the prediction of most economists who believed prices would rise by to 0.7%.

We at PRIME are not surprised, as we have tracked Britain’s disinflation (falling prices) for some time. And we warned as far back as 2003, and again in 2006, 2010, and e.g. in October, 2014 of the threat of global debt-deflation. Because policy-makers lack the tools to correct a deflationary spiral, the prospect of deflation is frightening.

We therefore find ourselves at odds with the British Chancellor, George Osborne who announced that the fall in inflation to 0.5% was “welcome news”; with the Bundesbank President, Jens Weidmann, who argued recently that “an inflation rate that for a few months lies below zero, for me, doesn’t represent deflation”; and finally with the Financial Times which ran the following headline on the news of Britain’s low inflation rate: ‘Good deflation’ seen as spur to growth”. (Note: this headline appeared in the paper edition of 14 January, 2015, and not in the digital edition.)

For ordinary consumers, workers, farmers and for the owners of firms and shops – especially those with debts – there is no such thing as “good deflation”.

Deflation occurs when prices (not necessarily all prices, but the average price level) fall below the costs of production – i.e. when prices become negative. So in a deflationary environment producers will sell a good or service at below the level of profitability or below the cost of making that product. They will do this just simply to get products off the shelves and out of the warehouse – before prices fall even further.

Deflating prices may appeal to the consumer, and may boost consumption in the short-term, but they are associated with savage costs that will quickly catch up with British and European, and potentially even American consumers.

The reason is as follows: if producers or retailers sell their wares below cost, then they will invariably make a loss on those sales. Their business will become less profitable. The sensible response when a firm is not able to price its goods to make a profit, or to cover costs, is to produce less of what it is unprofitable. In other words: to shrink productive activity. This is done by cutting production, trimming wages and inevitably, laying off staff. Thus the fall in prices, leads to a fall in profits, which leads to falls in wages and to a rise in unemployment. Unemployment means that workers lack disposable income, and find it harder to buy products and services on offer. As a result producers sell even fewer of their already low- priced products or services. Bankruptcies and unemployment rise, while wages and prices fall further, and so the deflationary spiral takes hold.

Furthermore, the price indices managed by government –in particular the Consumer Price Index (CPI  – are used to fix wages in private and public sector wage negotiations. Benefits received by disabled people and pensioners increase (or decrease) in line with CPI inflation. So when the CPI falls, be sure wages and benefits will fall too. (And with a political consensus in the British Parliament promising savage spending cuts in the next Parliament, pensions and other benefits will have to be cut in line with the falling level of CPI, if the proposed extreme spending targets are to be met.)

For Whom is Deflation Good?

Deflation is good for those on fixed incomes, as these will rise in real terms as prices fall.

So in a deflationary environment, creditors (effortlessly) grow richer as the value of debts owed to them rises (until their debtors default); and debtors with falling incomes find their debts become unpayable.

Keynes once wrote that:

“Deflation…involves a transference of wealth from the rest of the community to the rentier class and to all holders of titles to money; just as inflation involves the opposite. In particular it involves a transference from all borrowers, that is to say from traders,   manufacturers, and farmers, to lenders, from the active to the inactive…Modern business, being carried on largely with borrowed money, must necessarily be brought to a standstill by such a process.” [1]

In an economy that has high and still rising levels of private debt – owed by individuals, households, SMEs, big companies, banks and other financial institutions – deflation can be caused by borrowers paying down debts. If there is a crisis, as in 2007-9; and if prices, profits and incomes are falling, debtors become wary, and begin to use available income to pay off their debts. This deleveraging of debt, if combined with falling real incomes (as in the UK and much of the Eurozone) causes deflation, because it contracts the amount of money in the economy that can be used to purchase goods and services. As producers and suppliers compete to attract sales from penny-pinching debtors, they lower prices. We see this happening in the supermarket sector, where cut-price stores are out-competing mid-range stores – a cut-throat process aimed at luring in shoppers, but that may leave very few standing.

Britain’s private sector has very high levels of debt as the chart below shows – amounting to almost 370% of national income, or GDP. Britain’s debtors have been trying to de-leverage (pay down or re-schedule) their debts since the crisis, as the chart shows. However this de-leveraging has not gone far and over the last few months consumers have increased their borrowing, especially on credit cards.

Britain’s consumers, but most importantly big British companies and financial institutions have therefore, a vast burden, or overhang, of debt. These vast private debts – at three times our national income – have constrained or contracted economic activity. This is because debt acts as a drag on spending or investment, as we all know from personal experience. Furthermore, because British banks are still far from healthy, and because the economy is so anaemic, bank lending has contracted. So both the debt overhang, and the contraction in bank lending has helped to shrink the money supply. With deflation, this debt overhang will rise and become an unpayable burden for both financial institutions, corporates, households and individuals.

To compound this state of affairs, the British government decided in 2010 that it would further contract economic activity, by introducing austerity – and cutting back on government investment and spending.

This causality was implied, if not fully acknowledged by the governor of the Bank of England, Mark Carney in a speech to the TUC in October, 2010. He argued correctly that austerity squeezed profits and contracted incomes.

“Profits have been squeezed almost as much as labour costs. Employees have seen their      real incomes reduced……..”

He pointed out that wages fell by an unprecedented 10% after the crisis. “To find such a fall in the past, you would have to look back to the early 1920s” Carney reminded delegates.

The contraction in incomes, investment, spending and lending by both private and public sectors is the major cause of falling prices.

A sensible government might have noticed that, after the crisis, the banks acted bizarrely (largely because their balance sheets were in a mess). Rather than lending into the economy bankers were, for some years, borrowing from the real economy, as deposits exceeded loans.

This helped contract the money supply in both the UK and the Eurozone.

Governments in both the UK and the Eurozone compounded this contraction of both the money supply and economic activity, by contracting public sector activity. They hoped that fiscal contraction could be balanced by monetary expansion (i.e.QE). This was not to be, and monetary expansion as the Bank of England has admitted served only to enrich the already-rich.

These hugely damaging policies were loudly cheered on, or supported, by mainstream economists, by e.g. the UK’s Institute for Fiscal Studies, by the Office for Budget Responsibility and even by social democratic opposition parties.

A direct consequence of this double whammy of private and public contraction of UK investment and spending was the fall in prices from 2011 – as clearly demonstrated in the ONS chart below. 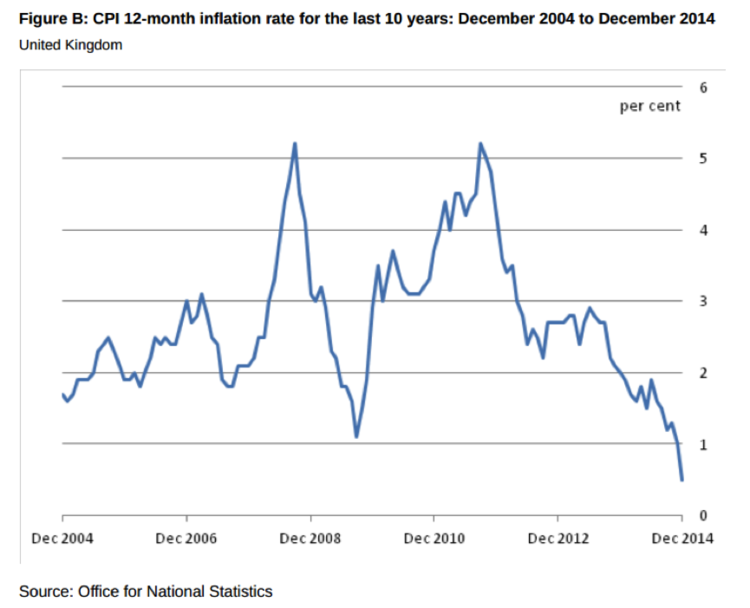 These falls in prices can be directly correlated with the onset of the Great Recession and the Coalition government’s determination in 2010 to reverse the stimulus and weak recovery put in place by the Labour government after 2008.

Indeed the impact of the Chancellor’s policies on prices was almost immediate, as the chart shows.

As Britons stage dramatic events to commemorate the tragedy of millions of lives lost during the First World War, we would do well to recollect that soldiers who survived the “trenches of death” returned to a country that would not provide employment. Then as now, the government imposed deflationary ‘austerity’ policies based on orthodox economic theory, wedded to that ‘barbaric relic’ the gold standard. As now, so then: austerity contracted investment and incomes, and lowered profits. Banks stopped lending, and the money supply shrunk further. This led directly to deflation, when prices fell precipitously after the short post-war boom. See the chart below: 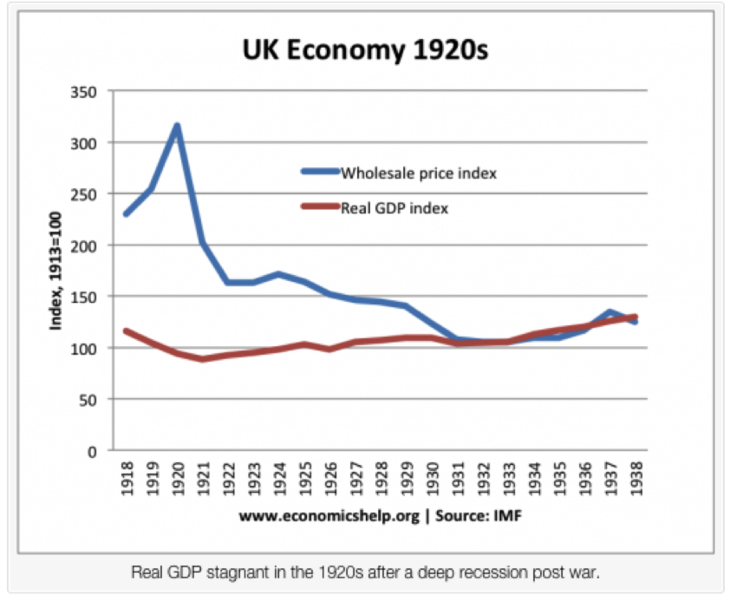 The result was a dramatic rise in unemployment for heroic British soldiers returning from a destructive war. Unemployment in 1921 reached its highest level – 11.5% – since records had begun; averaged 14% between 1921 and 1938, and never fell below 9.5%.

Although few of us alive today have lived through a deflationary era, the horror of that period ought to be fresh enough for the experience to be alive in the memories of the public authorities and of academics.

Sadly, these well-known facts about the deflationary ‘20s, have been forgotten, and lessons have not been learned. Or perhaps it is just that those who benefit from deflation – the rentier class – have once again reasserted themselves in the realm of public policy and public debate.

The 1920s era of deflation and high unemployment came about as a result of the very same austerity policies being vigorously re-applied today by ‘neoclassical’ or monetarist economists and politicians across the Eurozone and in the UK.

In his remarks at the launch of the November inflation report the governor of the Bank of England said:

“A spectre is now haunting Europe – the spectre of economic stagnation, with growth disappointing again and confidence falling back……”

That spectre – which may well presage an era as economically and politically dangerous as that of the 1920s and 30s – is a little late in haunting the policy-makers that have brought us to this deplorable state of affairs. The awful truth about deflation is that the public authorities have almost no policy tools for reversing it. Interest rates cannot fall lower than they are today; and with weak demand for goods and services, and as debtors choose to save rather than spend, monetary policy (or Quantitative Easing) – can do little to stimulate real activity.