Yves here. We featured an earlier post which pointed out that the results of modeling the cost/benefits of allowing migration depend, not surprisingly, on the assumptions made. This study is useful in that it is empirical, using Swedish data, when Sweden has good information and also generous social support programs. This analysis concludes the “costs” are low, based on the conventional view that deficits must be financed. One could just as well argue that managing immigration well gives political cover for deficit spending that is useful in a world with underemployment and a deflationary undertow.

The current inflow of refugees into Europe has left policymakers in disagreement over how to react. A major concern is the perceived financial burden that can result from large intakes. This column discusses the fiscal impact of refugees on the Swedish economy. The current net redistribution from the non-refugee population to refugees (excluding arrivals in 2015) is estimated to be 1.35% of GDP. The economic burden of a generous refugee policy is therefore not particularly heavy, especially if the host country incorporates them as quickly as possible into the labour market.

The inflow of refugees into Europe in 2015 was slightly above one million. The current inflow is unprecedented in history, and policymakers are in disagreement and disarray over how to react. The readiness of many countries to provide asylum is waning. In addition to concerns about security and preserving national identity, a major underlying reason is the perceived financial burden that would result from larger intakes.

But how well-founded are these concerns? What, in reality, is the fiscal impact of these new arrivals? While there have been many studies of the economic impact of immigrants taken as a whole (see summary by Rowthorn 2008), these are not very informative about the impact of refugee immigration in particular. For obvious reasons, the labour market performance of economic immigrants – who immigrated because of their economic opportunities – is generally a lot better than that of refugees. And hence, refugees’ net contributions to public finances are not as positive as those of economic immigrants. This is clearly indicated, for example, by Ekberg (2009). Ekberg notes that the average immigrant in Sweden was a net contributor to public finances until approximately the middle of the 1980s, i.e. during a period where immigration for economic reasons dominated. However, he also notes that over the last 30 years, when refugees have made up larger shares of Swedish immigrant inflows, the net contribution of the average immigrant has been negative.

In a recent paper (Ruist 2015), I have therefore provided the first estimate of the fiscal redistribution specifically to refugee immigrants in any Western country. That country is Sweden, the European country with the largest number of refugees per capita as well as some of the best micro-level socioeconomic data in the world. If all 15 pre-2004 EU members had the same rates of refugee immigration per capita as Sweden from 2005-2014, the number of refugees received in these countries would have been 5.9 million instead of the actual 740,000. So, in answering what the fiscal impact would be in other countries if they would begin to receive their fair shares of the current inflows – something few of them can be said to have done until now – the Swedish experience will be the best existing indicator.

My estimates of the redistribution to refugees through the Swedish public sector in 2007 are shown in Table 1. Column (1) shows a summary of Swedish public finances in that year, summing all revenues and costs over the entire population. Column (2) shows the corresponding revenues and costs that relate to the refugee population, and Column (3) is refugees’ share of the total values, i.e. the ratio between the two previous columns. Refugees’ make up 5.1% of the total population. Hence, a value larger than that in Column (3) means that refugees are over-represented on the revenue or cost item in question, and vice versa.

Table 1. Redistribution to refugees through the public sector in 2007 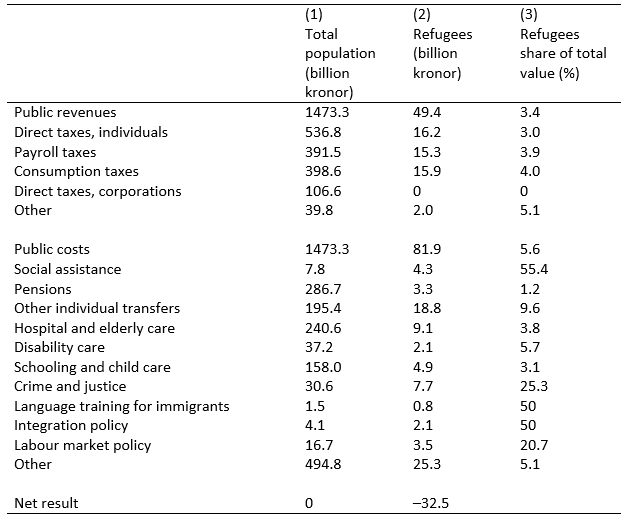 It emerges, not surprising, that refugees were highly over-represented in certain types of public spending. Most strikingly, they accounted for 55% of social assistance spending, as opposed to their share in the total population of only 5.1%. Seventeen percent of refugees received social assistance as opposed to only 3.3% of the total population. On the other hand, refugees heavily concentrated in the 20-59 age bracket, were under-represented in public spending on larger budget items like pensions, health, and education. All told, it is estimated that refugees accounted for 5.6% of total public spending, a share not drastically out of line with their share of the population. However, they performed much worse than the rest of the population on the revenue side, where they contributed only an estimated 3.4% of total public revenue, essentially through direct and payroll taxes. The reason is clear: the employment rate among adult refugees was 20 percentage points lower than that among all adults. The reasons include poor language skills, lack of applicable training, lower female labour force participation rates, and so on.

If we want to use these estimates as indications of what substantially higher refugee intakes might imply for other European countries, we should note that the net per-capita costs in most other countries are likely to be somewhat smaller than in Sweden. This is first because Sweden has a very advanced labour market, with fewer simple jobs and a more compressed wage structure than any other European country. Hence, it is particularly difficult for a refugee immigrant without the required schooling and linguistic and cultural skills to find work and become a contributor to public finances in Sweden. Second, it is because the Swedish welfare system is comparatively generous towards people without any history of earning wage income in the country. Hence, an unemployed refugee immigrant receives more from the public sector in Sweden than they would in most other countries.