We’ve warned for some time that the debt loads on fracking companies were substantial, and had accounted for a high percentage of new lending in the US over the last five years. We also warned that the fall in energy prices, which was widely ballyhooed as a boon for the economy, would not only hit energy companies, but would have knock-on effects by lower revenues and employment in oil/shale boom towns, employment cuts at oilfield service providers, and a downturn in real estate prices in affected communities, all of which could result in loan losses at regional banks.

And remember the big rule of investing: tail risk is much greater than you assume.

From the International Business Times:

A financial watchdog set off the alarm bells on corporate debt Wednesday in its annual report to Congress. With companies feeling growing pressure from painful exchange rates and energy prices, the U.S. is at a higher risk of seeing a wave of corporate defaults, the report said.

The report from the Office of Financial Research, a division of the Treasury Department, listed credit risk as one of the top three financial stability dangers facing the economy in 2016…. 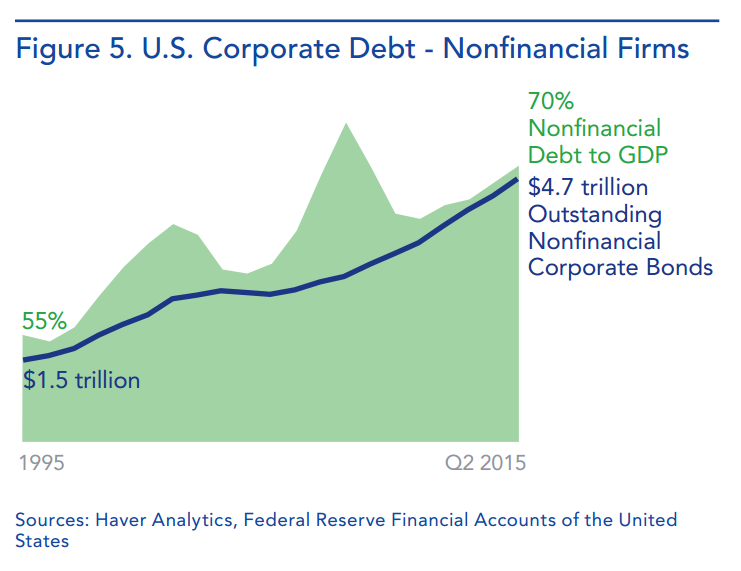 It’s not just oil companies that are exposed, however. Regional banks that lend to the energy industry could suffer as a result of a default wave, the OFR report noted, adding that “the ultimate magnitude of losses in these industries and regions is uncertain.”

Moody’s had elevated the debt default concern by downgrading 175 energy-related companies last Friday. Standard & Poors followed suit quickly, but not with a raft of downgrades, but a big warning and a whack at the one-time fracking darling Chesapeake Energy. From OilPrice:

Moody’s further said that some companies could be downgraded by multiple notches — suggesting these could go to junk status overnight. The firm added that energy companies in North America are particularly at risk for downgrades.

And Moody’s wasn’t the only agency raising concerns about resource companies. With Standard & Poor’s (S&P) following suit this week in lowering its commodity price assumptions for the coming years.

S&P said Monday it has cut its 2016 and 2017 forecast for WTI crude by 20 percent. And also dropped its forecast price for Henry Hub natural gas by 15 percent for the next two years.

That prompted S&P to issue an immediate credit downgrade on one major oil and gas player: shale specialists Chesapeake Energy. A move that caused a single-day, 16 percent fall in Chesapeake’s share price….

The real pain will come when these firms need to refinance debt. Chesapeake, for example, has $2 billion in liabilities coming due in 2017 (against a current market capitalization of just $2.1 billion) — meaning the company needs a significant turnaround in investor sentiment, right away.