VoxEU has a new paper based on network analysis called A ranking of financial economists by centrality, which seeks to identify who is in what amounts to a club. The authors make clear that a major aim of the piece is to give career advice to younger scholars.

The ﬂow of information within the profession will likely be determined by the structure of the social network of informal collaboration rather than the pure co­-author network. Our network captures a dimension that Oettl (2012) terms helpful­ness. Commenters spend time to review a paper, comment and make suggestions.

Two things seemed interesting about the results. One was that despite the wide-spread stereotype of women being “helpful,” being female was negatively correlated with all the network rankings the authors looked at. So the authors confirm that it would be better for your career in economics if you could manage not to be female.

The second was that the authors looked at an economics department ranking versus the amount of influence suggested by the network measures. Members of the NBER (which is mixed ideologically but has left-leaning academics in its ranks) and CEPR (which is center left) was correlated well with formal influence, but negatively correlated with informal influence. Does this point to subtle or overt bias among which papers get published, since the network analysis was based who was thanked by authors of articles in top finance journals? Given how the paper discusses the importance of the dissemination of “new” ideas through theses informal networks, when most “new” ideas in economics are old wine in new bottles. Thus these informal networks appear likely to be venues for introducing and propagating what I’ve called “leading edge conventional wisdom,” which is the most attractive set of views to be touting at any point in time.

While annual economics job market conferences like the AEA or AFA can be forbidding to fresh graduates anxious to secure their dream job, they also pose great opportunities to engage with colleagues about your research. Competition to present a paper at these conferences is tough and discussants are often leading experts in their ﬁeld. How important is this informal collaboration for authors to learn about new developments in their ﬁeld, or how a research paper is received by their peers?

With few notable exceptions, the existing literature studies formal collaboration – that is, co-authorship only. But co-authorship is less prevalent in economics compared to other disciplines such as biology (Laband and Tollison 2000). Consequently, when writing a research paper in economics and ﬁnance, most collaboration is informal, for example, through commentary from colleagues, feedback during seminar presentations, discussions of the paper at conferences, or even during the referee process after submitting a paper to a journal.

The ﬂow of information within the profession will likely be determined by the structure of the social network of informal collaboration rather than the pure co­-author network. Our network captures a dimension that Oettl (2012) terms helpful­ness. Commenters spend time to review a paper, comment and make suggestions. For this reason the social network of informal collaboration contains more than twice as many researchers as a pure co-author network. Interestingly, only half of all authors are ever acknowledged, while only one out of four commenters authors a pa­per in our dataset. The network also connects more academics. In the late sample 98% of all economists are connected in an uninterrupted series of links in the social network of informal collaboration, while an uninterrupted path exists only for 20% of all authors in the co-author network.

Links in the general interest journals (JF, JFE, RFS) typically form the core of the network, while links in ﬁeld journals (JFI, JMCB, JBF) typically connect researchers in the periphery. Figure 1b shows the giant component of the social network of informal collaboration for the late sample. The roughly 34,000 links are colour-coded. Links from general interest journals are red, links from ﬁeld journals are blue, and the few links occurring in both types of journals are purple.

The network is heterogeneous. Some academics are much more central than others. Network centralities provide insights on the role speciﬁc individuals play in the transmission of information or the inﬂuence they exert on neighbours (Jackson 2014, Ballester et al 2006). Examining co-author networks in economics, Ductor et al (2014) write, for example: “Communication in the course of research collaboration involves the exchange of ideas. So we expect that a researcher who is collaborating with highly creative and productive people has access to more new ideas. This, in turn, suggests that a researcher who is close to more productive researchers may have early access to new ideas. As early publication is a key element in the research process, early access to new ideas can lead to greater productivity.” The two most prominent centrality measures are ‘betweenness’ and eigenvector centrality. Both are related but distinct – betweenness centrality measures the importance in the transmission of information, while eigenvector centrality points to the best connected group (i.e., opinion leaders) in the network. 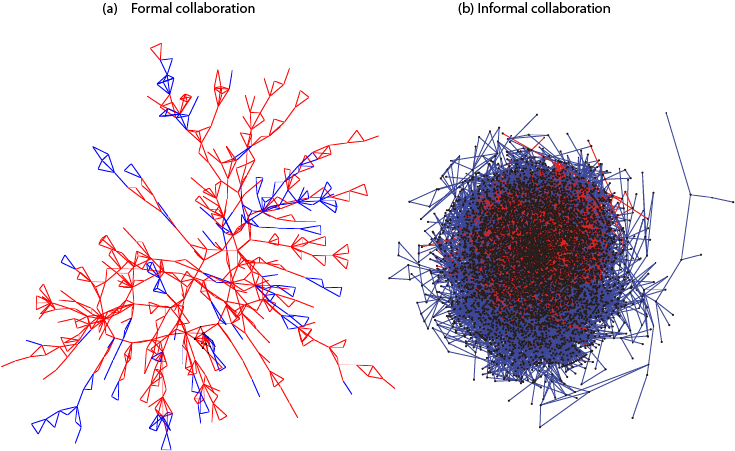 Note: A link is drawn between every author (ﬁgure 1a, left), between an acknowledged commenter and every author (ﬁgure 1b, right) of a published research article. Red links indi­cate that the research article was published in a general interest journal (JF, RFS, JFE), while blue indicates a ﬁeld journal (JFI, JMCB, JBF) publication. If a link occurs in both a general interest journal and a ﬁeld journal, which is a rare event, it is coloured purple. Only the giant component is shown.

Figure 2. Top 25 researchers in the social network of informal collaboration in the late sample (2009-2011) 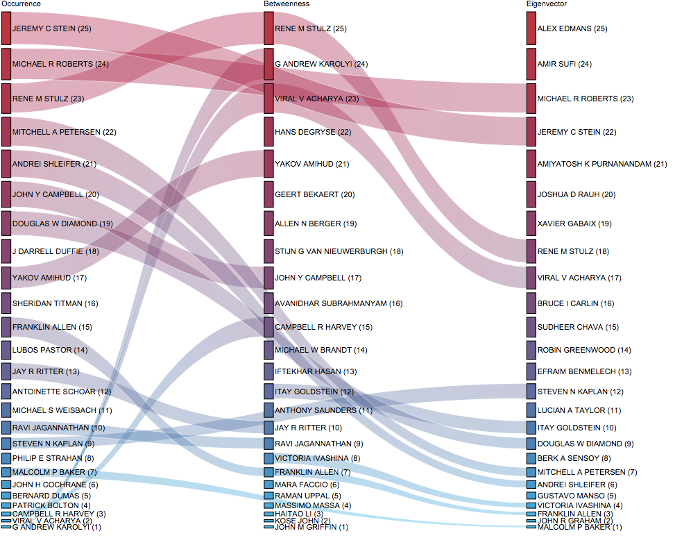 Note: Occurrence denotes how often an academic is acknowledged, ‘Betweenness’ is the between­ness centrality, and ‘Eigenvector’ the eigenvector centrality. To compare diﬀerent rankings de­spite their diﬀerent ranges we use an ordinal ranking where the ﬁrst place gives 25 points, second place gives 24 points, and so on.

To understand the individual determinants of being acknowledged often or being central, we augment our dataset with individual characteristics originating from aca­demics’ CVs. Additionally, we make use of the 2013 Tilburg Economics Department Ranking to numerically compare the quality of aﬃliations.2 Our data collection highlights remarkable diﬀerences among the typical member of each of the three sets. For example, the typical top-100 acknowledged academic is more likely to be a member of either CEPR or NBER and about three to six years more senior. The main diﬀerence between the typical top-100 betweenness-central researcher and the typical top-100 eigenvector-central researcher is that the former has been trained at a lower-ranked university and has served more years on editorial boards.3

A proportional odds model with the rank being the dependent variable reveals some diﬀerences in the predictive characteristics, at least for the three sets of top-100 academics (see Georg and Rose 2015 for detailed regression results).