Yves here. This post brings up an important issue, or perhaps to put it another way, looks at historical precedents to see if there is the potential for better outcomes for the exodus from the Middle East to Europe than we are seeing now. But it does not acknowledge a big background problem: weak economic conditions and lousy employment levels in Europe even before the influx took place. That hurts immigrants of all types, but low skilled ones most of all

Another factor it ignore is that even highly-skilled immigrants in times of reasonable prosperity usually take a step or two down on the economic ladder when they emigrate, due to lack of connections and credibility (for instance, inability of the locals to evaluate their educational skills and career attainments in their former home), as well as in almost all cases, less than stellar fluency in their new language. Plenty of Jewish professionals fleeing Germany in the 30s wound up in more modest jobs, like doorman or clerk. The article does not address the fact that professionals in warp-torn Middle Eastern states were the first to go. The Australian media reported extensively in 2003 on how the departure of doctors and well-heeled business men from Iraq who decided it was best to get out with what they could since they could see they had nothing to gain and even more to lose by staying, because it increased the damage to Iraq to lose a big swathe of its educated classes. So there has already been migration of the more skilled members of many of these societies, but apparently on a gradual enough basis so as not to register as significant.

By Nuria Boot, Research Assistant in the area of Competition Policy, and Reinhilde Veugelers, professor at KULeuven (BE) in the Department of Management, Strategy and Innovation and former advisor at the European Commission (BEPA Bureau of European Policy Analysis). She was also the President-Elect of EARIE (European Association for Research in Industrial Economics. Originally published at VoxEU

The long-term impact of migration on innovation and productivity growth in host countries is a neglected issue in the current debate on refugees. Research shows that these effects can be substantial, but if Europe wants to capitalize on this potential it will need better information systems to match migrants’ skill sets with host environments.

As we have seen at various points in history, skilled migrants can have a substantial impact on the host economy through innovation and productivity growth, even when arriving in large numbers. These effects are beyond the direct contribution of the skilled migrants themselves.

One important channel of impact is indirect, through the transfer of knowledge from migrant workers to native workers in the host country. However, analysis shows this takes a long time to materialize, and the effects are not obvious.

Migrants’ skills need to complement those of the host economy, host economies need a strong native human capital set that is able to learn from migrant skills, and migrant and host skills need to be sufficiently connected.

The effects of skilled migration

Borjas (1995) also explores when immigration can be beneficial for economic growth.  When immigrants’ skills are sufficiently different from native workers’ skills, and when their characteristics are complementary to the native factors of production, this can lead to an “immigration surplus”. However, Borjas’ research does not look at the impact of mass migration on host productivity growth.

When the Huguenots were outlawed in France by Louis XIV in the 17th century, thousands of skilled migrants fled to other European countries. Hornung (2014) analyses the impact of this mass skilled migration on host productivity growth.

About 20,000 people went to Brandenburg-Prussia (which had a population of about 1.5 million), and about 5,000 to Berlin, where they represented about 20% of the town’s total population. The Huguenots were known for being well educated and holding skilled occupations.

The Prussian King, Friederich Wilhelm I, selected Huguenots according to their skills and assigned them to the Prussians towns depopulated by the Thirty Years’ War and the Black Death.

Hornung uses the historic records of this natural experiment where Huguenots were placed in selected Prussian towns, in combination with firm-level data on the value of inputs and outputs for all 693 textile manufactories in Prussian towns in 1802.  He finds that immigration had long-term positive effects on productivity in textile manufacturing, where the Huguenots had specific skills.

Even if the Huguenot manufacturing plants did not survive, technology was transferred to local manufacturing plants by training workers. However, these indirect transfers took a long time to materialize, due to the gap in native textile skills in Prussia at the time and to language issues.

The Jewish migrants who left Germany for the United States in the 1930s and 1940s are another example of forced mass skilled migration. By 1944, over 133,000 German Jewish émigrés had found refuge in the United States. Most were urban white-collar workers and one fifth were university graduates.

The authors find sizeable positive effects. They estimate a 71 percent increase in local patenting. The authors also document the multiple channels through which these effects materialized:

Preliminary work by Rachel Harris suggests that mass migration may positively impact host economies’ innovation capacity, even if migrants are low-skilled. She studied the Mariel Boatlift, a mass emigration of Cubans to the USA in 1980, as a natural experiment.

Little precise information is available on how many people came to the United States during the Mariel Boatlift or exactly where they settled. The most reliable sources (Card, 1990) indicate that between April 1980 and June 1981, 120.000-126.000 Cubans entered the US labour market, about half settling in Miami, and half in the rest of Florida. Many of the migrants were low-skilled and had a low level of English.

Nevertheless, Harris finds that the Mariel Boatlift caused an increase in patents in Florida, in technological categories with low barriers to entry. She suggests that this could be because individual inventors had access to a large supply of low-skilled labourers, and were able to hire them to do housework, child care and other manual work. This allowed these inventors to substitute away from housework and spend more time inventing, leading to an increase in patenting.

Lessons for the current crisis

From these historical studies it can be seen that skilled migration can have a substantial effect on productivity growth in the host economies.  But this requires migrants’ skills to be matched to the needs of host economies.

Unfortunately, reliable systematic data on the skills of the current migration wave is not widely available. One of the most up-to-date sources of information is from the Swedish Employment Services, where refugees are asked to provide information on their education as part of an ‘establishment programme’.

In 2015, most of the refugees accepted onto the programme had less than 9 years of education, as shown in the figure below. Interestingly however, the second biggest share of refugees had higher education. This bodes well for the long term impact of migrants’ skills on the host economy. 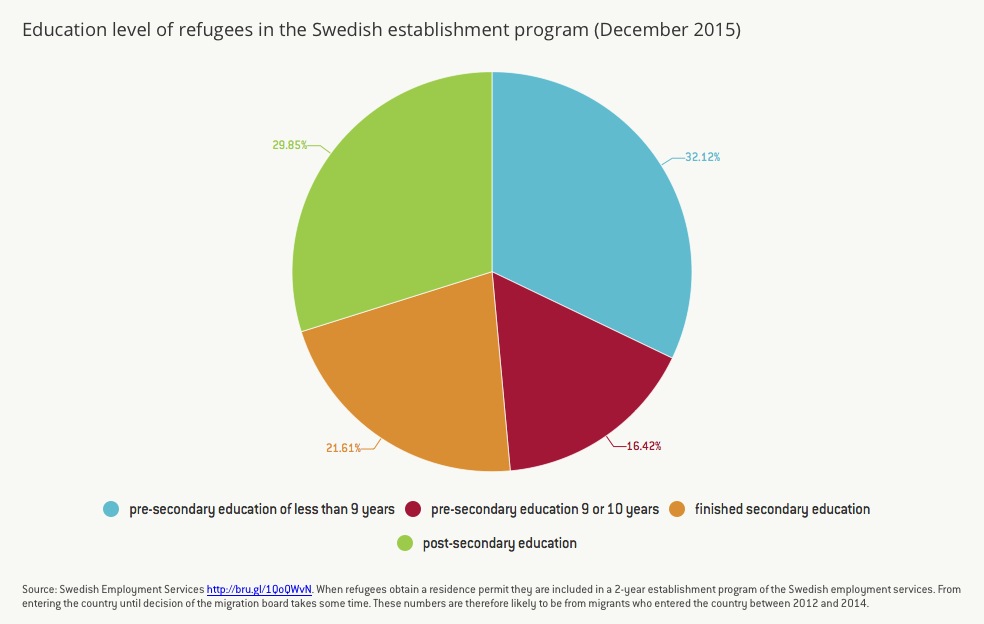 If Europe wants to capitalize on the potential for long term effects on productivity growth from its migrants, European leaders must better balance migrants’ skills and the needs of host countries.

Currently it is not possible to match migrants to the skills base of the host regions in Europe, as systematic information on incoming skills is missing.

A better information system on the incoming migrants’ skills is needed, in order to match migrants better with the hosting environments, and ensure that their potential to boost innovation and productivity growth is not wasted.

Positive spillover effects from matched skills will also be larger and faster with smaller language barriers.  The earlier migrants can take language courses, the quicker they can integrate into the labour market and the faster spillover effects can materialize.

Implementing this information system, and matching skills and environments at the European level would benefit migrants and host countries on a  larger scale. It would reduce fixed set up costs, and allow for better matches.