Are the Germans plotting to beat Marine Le Pen to the punch in her “destroy the Eurozone” plot? Not that that is Le Pen’s main goal, but executing her plan to have France leave the currency union would do just that.

However, even before we get to the scheme of the day, it’s important to recall that Germany has imposed boundary conditions that make it impossible for the Eurozone to survive, such as insisting on retaining its trade surpluses with other countries in the currency bloc, yet refusing to finance their purchases, and also stymieing other measures that could finesse the problem, namely, fiscal transfers, like large-scale infrastructure spending in periphery countries financed by an ECB infrastructure bank (one of the mechanisms in Jamie Galbraith’s and Yanis Varoufakis’ Modest Proposal). If Germany and its allies in the creditor nations don’t relax these constraints, the Eurozone is destined to founder. It’s just a matter of time.

And the Germans may be accelerating that time of reckoning. Ambrose Evans-Pritchard has a new story on a German sovereign bond bail in scheme that is obviously hair-brained, in that it is guaranteed to blow periphery bond yields sky-high, which was the very problem the Eurozone was struggling to contain through 2012. That meant periphery countries could not finance their budgets or even roll over maturing debt at reasonable prices. It also meant that banks were imperiled, since they were stuffed to the gills with sovereign debt that Mr. Market said was worth a lot less than they’d paid for it.

The one big caveat regarding the Evans-Pritchard piece is that my contacts who read German don’t recall seeing any reporting on it, nor did they see any news about it in today’s papers. Evans-Pritchard’s story appears to have been placed by Peter Bofinger, who is apparently a lone and loud dissenter on the five-member German Council of Economic Advisers to the sovereign bail-in plan.

A new German plan to impose “haircuts” on holders of eurozone sovereign debt risks igniting an unstoppable European bond crisis and could force Italy and Spain to restore their own currencies, a top adviser to the German government has warned….

The German Council has called for a “sovereign insolvency mechanism” even though this overturns the financial principles of the post-war order in Europe, deeming such a move necessary to restore the credibility of the “no-bailout” clause in the Maastricht Treaty….

Under the scheme, bondholders would suffer losses in any future sovereign debt crisis before there can be any rescue by the eurozone bail-out fund (ESM). “It is asking for trouble,” said Lorenzo Codogno, former chief economist for the Italian Treasury and now at LC Macro Advisors.

This sovereign “bail-in” matches the contentious “bail-in” rule for bank bondholders, which came into force in January and has contributed to the drastic sell-off in eurozone bank assets this year.

Prof Bofinger wrote a separate opinion warning that the plan could become self-fulfilling all too quickly, setting off a “bond run” as investors dump their holdings to avoid a haircut.

Italy, Portugal and Spain would be powerless to defend themselves since they no longer have their own monetary instruments. “These countries risk being hit by a dangerous confidence crisis,” he said.

Yves here. Bofinger’s warning was based on the assumption that the next move would be for countries like Italy and Portugal to introduce their own currencies pronto. But as we discussed at length (see here, here, and here for some examples), it will take years to convert to a new currency, thanks to systems requirements, most of which are not under the control of the government wanting to make the conversion. In the case of Greece, as we saw in its two-week bank holiday, the lack of access to international payments systems hit key imports – tourism, food and pharmaceuticals – hard and would have soon started affecting fuel imports. Greece is not self-sufficient in food. Italy may be, but does it have the staying power to function as an autarky for 3+ years? (Yes, IT experts who know the relevant systems estimated three years was the minimum amount of time to execute a conversion smoothly. No planning, meaning trying to manage an emergency while you are also trying to deal with the systems issues, would almost certainly be worse).

So the fact that the Eurozone is a roach motel may be why the Germans think they can push their plan through. But in tightly-coupled systems, measures to reduce risk actually wind up increasing it. And bail-ins don’t just fail to reduce risk, because they shift it from taxpayers to investors. They increase it by putting in place an automatic procedure. Now that procedure may wind up being suspended in practice. But if it is believed to operate in an automated manner, parties will move to get out of its way when it is in danger of kicking in, creating runs. In this case, unlike Bofinger, I don’t think this will cause exits. It will cause funding crises at Eurozone states and bank runs, since bank guarantees are primarily at the national level and the second-level of Eurozone-wide guarantees is thin and only in the process of being funded.

And that’s before you get to the immediate tight-coupling factor: this mechanism would lead to haircuts of sovereign debt sitting on bank balance sheets. Worse, imposing losses on banks is a feature, not a bug. Evans-Pritchard again:

The German Council says the first step would be a higher “risk-weighting” for sovereign debt held by banks, and a limit on how much they can buy, with the explicit aim of forcing banks to divest €604bn. They would have to raise €35bn in fresh capital, deemed “manageable”. 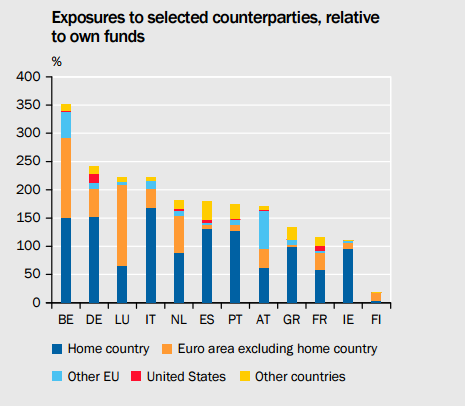 It is a neuralgic issue in Italy, where the banks own €400bn of government debt and have effectively used cheap finds from the European Central Bank to prop up the Italian treasury.

Raising €35 billion in equity was well nigh impossible even before this scheme was well known. It’s hard to see how anyone with an operating brain cell would want to be a shareholder or depositor in anything but the most solid banks in one of the periphery countries. The smarter move is to go to a solid bank in one of the creditor countries. That slow-motion bank run is already under way in Italy and if this plan moves forward, it is sure to accelerate.

Germany is burning the village to save it. This Gotterdammerung is set to be quite the spectacle. But plenty of bystanders will be torched too.