his wild and crazy election cycle is generating an enormous amount of data that social scientists will be pondering for years to come. We are learning about the beliefs, preferences, and loyalties of the American electorate, and possibly witnessing a political realignment of historic proportions. Several prominent Republicans have vowed not to support their nominee if it it happens to be Trump, while a recent candidate for the Democratic nomination has declared a preference for Trump over his own party’s likely nominee. Crossover voting will be rampant come November, but the flows will be in both directions and the outcome remains quite uncertain.

Among the issues that the emerging data will be called upon to address is the accuracy of prediction markets relative to more conventional poll and model based forecasts. Historically such markets have performed well, but they have also been subject to attempted manipulation, and this particular election cycle hasn’t really followed historical norms in any case.

On Super Tuesday, the markets predicted that Trump would prevail in ten of the eleven states in play, with the only exception being a Cruz victory in his home state of Texas. This turned out to be quite poorly calibrated, in the sense that all errors were in a single direction: the misses were Oklahoma and Alaska (which went to Cruz) and Minnesota (where Rubio secured his first victory). But the forecasters at FiveThirtyEight also missed Oklahoma and were silent on the other two so no easy comparison is possible.

Today we have primaries in a few more states, and another opportunity for a comparison. I’ll focus on the Republican side, where voting will occur in Kansas, Kentucky, Louisiana and Maine. Markets are currently predicting a Cruz victory in Kansas (though the odds are not overwhelming): 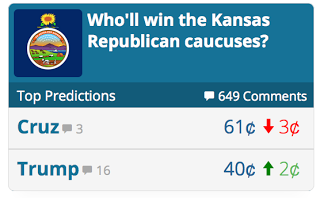 In contrast, FiveThirtyEight gives the edge to Trump, though again it’s a close call: 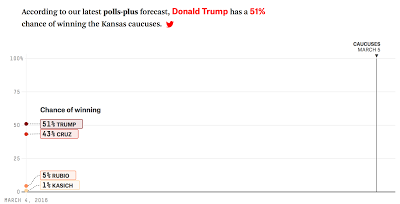 So one thing to keep an eye out for is whether Trump wins fewer than three of the four states. If so, the pattern of inflated odds on Super Tuesday will have repeated itself, and one might be witnessing a systematically biased market that has not yet been corrected by new entrants attracted by the profit opportunity.

But if the market turns out to be well-calibrated, then it’s hard to see how Rubio could possibly secure the nomination. Here’s the Florida forecast as of now: 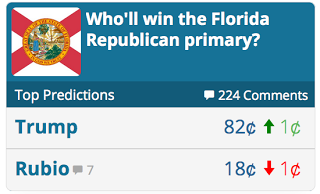 The odds of a Trump victory in Michigan are even higher, while Kasich is slightly favored in Ohio. Plenty of things can change over the next couple of weeks, but based on the current snapshot I suspect that there is a non-negligible probability that Rubio may exit the race before Florida to avoid humiliation there, while Cruz and Kasich survive to the convention. This is obviously not the conventional wisdom in the media, where Rubio continues to be perceived as the establishment favorite. But unless things change in a hurry, I just don’t see how this narrative can be sustained.