Lambert here: IMNSHO, there’s one ginormous flaw in this paper that’s perhaps too obvious to note.

Correlations between media attention and capital flows to investment vehicles are well established. However, the question arises of whether this is due to new information conveyed or if it is just an artefact of the attention itself. This column employs fund rankings from the Wall Street Journal to investigate the issue. It shows that media attention does drive these investment decisions, even if no new information is conveyed. It further argues that financial intermediaries are aware of this effect and exploit it.

Establishing a causal link from media mentions to investment flows has proven difficult due to the endogenous nature of media coverage and the omitted variable problem involved, though recent work has made some progress on that front[1]. Determining whether this causal link is due to the information being conveyed or is merely caused by the attention directed at the investment vehicle has proven even more difficult.

In a new paper (Kaniel and Parham 2015), we exploit a clean natural experiment in which the Wall Street Journal has prominently published the top 10 mutual funds, ranked within various commonly used investment style categories, every quarter since 1994. Rankings are simply based on the funds’ returns during the previous 12 months, ensuring both minimal editorial impact and quasi-random assignment around the publication cutoﬀ (rank = 10). We use this setting within a regression discontinuity framework to demonstrate that:

Figure 1 graphically depicts a clear discontinuity in capital flows following publication between funds which appeared in the ranking (and thus garnered media attention) and those which did not. The figure presents mean capital flows into funds, during the quarter after publication, by fund rank, overlaid with two smoothed kernel regressions from both sides of the publication cutoff, and their 95% confidence bounds. The discontinuity, between funds ranked 11 (unpublished) and 10 (published), represents a 2.2 percentage point increase in flow of capital into the published funds during the post-publication quarter. This is a hefty 31% increase in capital flows (from 11 to 10), which is even more striking when considering the fact that the increase in returns between the two ranks is about 3% (or 0.6 percentage points). Importantly, a discontinuity exists only at rank 10 but not at any other plausible cutoff. The media effect on flows is roughly 7 times larger in magnitude than the effect of the well-documented performance-flow relation which shows that funds with higher performance garner more flows, as investors chase returns (e.g. Chevalier and Ellison 1997).

Figure 1. Mean capital flows into funds in quarter after publication, by rank 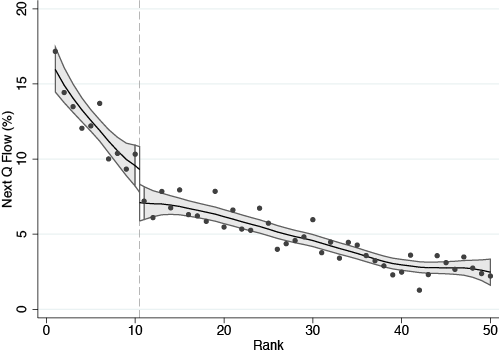 Note: mean capital flows into funds during quarter after publication by fund rank, overlaid with two smoothed kernel regressions from both sides of the publication cutoff, and their 95% confidence bounds

Hence, a clear causal relation exists between media attention and subsequent investor behaviour. This causal relation is supported by the fact that rankings around the publication cutoff are extremely fluid. For example, a fund which started the last day of a 12-month ranking period at rank 10 has more than a 25% chance of ending that day (and the entire 12-month ranking period) with rank > 10, and thus not being published. This is to say that published and unpublished funds are strongly randomly assigned around the cutoff, and the only notable difference between funds at rank 11 and at rank 10 is the media attention.

But is this effect the result of new information being conveyed? Or is it merely the prominence of the media mention that drives investment behaviour? Two other features of this natural experiment are helpful in answering these questions.

Second, similar ranking tables were also published by the Wall Street Journal for within-quarter months (months that do not follow the end of a calendar quarter), but these rankings were not published in the Investing in funds – a quarterly analysis special issue, but rather less prominently in the back pages of the regular section of the newspaper, thus garnering much less media attention. Figure 2 repeats the analysis of Figure 1 for these within-quarter rankings and finds no discontinuity in capital flows. It is therefore evident that the prominence of the publication plays a critical role in investor persuasion.

Figure 2. Mean capital flows into funds in quarter after publication, by within-quarter rank 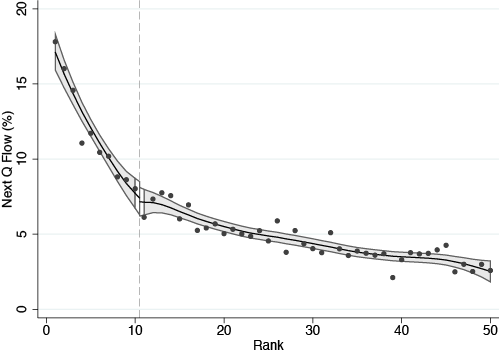 Note: mean capital flows into funds during quarter after publication by within-quarter fund rank, overlaid with two smoothed kernel regressions from both sides of the publication cutoff, and their 95% confidence bounds.

The existence of a media effect on consumer financial decision making implies that fund managers’ payoffs resemble a call option due to the implicit asymmetric incentives induced by the extra flows. Discontinuity in capital flows implies that, for funds around the rank 10 cutoff, there is a greater upside to increased rank than a downside to decreased rank. For example, a fund ranked 11 a month before the end of a ranking period which drops from rank 11 to rank 20 by the end of the ranking period will, on average, see a 0.8 percentage point decrease in capital flows. Rising from rank 11 to rank 10 will, however, generate a 2.5 percentage point increase in flows. Do fund managers react to this implicit incentive, and if yes, how?

Consistent with theoretical predictions by Basak et al. (2007) and Cuoco and Kaniel (2011), funds ranked near the rank 10 cutoff at the beginning of the last ranking month, and only these funds, ‘diverge from the herd’ by increasing tracking error volatility relative to their category in an attempt to make the list. A closer analysis reveals that funds are well aware of the trade-offs induced by this risk shifting – within funds ranked near the cutoff, only those that are unlikely to be ranked as top performing funds next quarter increase tracking error volatility (and risk a performance decline relative to the category). Diverging from the herd is the optimal risk-shifting policy in such a tournament setting, and the fact that funds exhibit such a behaviour shows that:

Furthermore, we show that ‘making the list’ (and garnering media attention) causes funds to increase advertising activity (in terms of average ad size, number of ads, and advertising expenditure), in an attempt to capitalise on the media attention. This is especially true for funds in the 6-10 rankings, which comprise the bulk of advertising in the quarter following publication.

Investors exhibit ‘limited attention’ behaviour, and react to ‘information-free’ media attention. Financial intermediaries predict this behaviour, and exhibit tournament behaviour to try and capture flows caused by media attention. These results fit well with the predictions of the model by Merton (1987), in which investors have a limited ‘consideration set’ of investments from which they choose, and when they hear of a new investment opportunity, they add it to the limited consideration set, rather than systematically searching for the investments most suitable for them.

[1] Engelberg and Parsons (2011) demonstrate how extreme weather events which may disrupt the delivery of local newspapers sever the link between local content publication and local trading.

Lambert again: Let’s take the authors’ model, a bulleted list, and number it:

And the increased capital flows (#4) are then skimmed to plant new stories (#0). It’s a virtuous cycle!

Of course, that would be fraud. Or a phishing equilibrium. And it be fair, capital flows fund advertising, too, as the authors point out. Nevertheless!