Back in 2012, Fairfax journalist Tim Hunter (“Chalkie”) caught a whiff of something unsavoury about New Zealand Foreign Trusts:

There are several key features of a foreign trust, one of them being that it pays no tax on overseas income. On its own that’s a useful attribute, but when combined with another it becomes turbocharged, because foreign trusts don’t have to tell anyone what they own, how much money they make, or who benefits from anything they pay out.

There are exceptions to this veil of secrecy, but we’ll come back to that. And before aspiring Kiwi tax dodgers start reaching for their accountant’s phone number Chalkie should point out that foreign trusts can’t be used by anyone living in New Zealand.

However, it may already be apparent that if, say, you had a lot of money and if, say, you wanted to hide it from certain tax authorities, a New Zealand foreign trust could be just the ticket.

This turns out to be an unintended consequence of an attempt to stop New Zealanders avoiding tax by hiding their assets and income in overseas trusts. Taxing trusts according to the domicile of the settlor, rather than the trustee, was the chosen solution. This was neat and radical, but it created a gigantic loophole:

Originally, foreigners settling a New Zealand foreign trust could do so in perfect secrecy, because a trust is technically just a private arrangement. Not only was there no register of trusts, there was no requirement to tell the government or the IRD about it as long as it had no New Zealand income.

An overseas taxman was therefore stuffed if he wanted to probe a citizen’s New Zealand trust interests. Even if he asked our IRD for information, IRD simply didn’t have it and had no power to get it.

After a while, the Aussies noticed:

The Australian Taxation Office found this particularly annoying because it suspected lots of Aussies were using NZ trusts to avoid tax.

That changed when new disclosure rules came into force in 2006, but only a bit.

Trustees also had to keep financial details such as the trust’s income and distributions, as well as the name of the settlor and the beneficiaries, and hand over the information to IRD on demand.

This reform was not a stroke of genius. The New Zealand authorities of the day contrived to look both craven and truculent at the same time. They folded to the Aussies, but were happy for the rest of the world to continue to take a hike:

The Australian ones had it tough, because the IRD now routinely passes their details on to the ATO [Australian Taxation Office]. But the rest are relatively undisturbed because the IRD won’t ask for financial details unless they are first sought by an overseas taxman, and the overseas taxman has to ask for information about a trust by name, which means they first have to know it exists.

One tax consultant assessed the situation thus: “As the names of the settlors and beneficiaries are not disclosed, there is no risk of disclosure to other governments under current legislation.”

Quite a lot of shadowy people like this set-up very much indeed. According to New Zealand’s Inland Revenue Department, roughly 7,500 foreign trusts had been registered with the IRD between 2006 and 2012, and were still extant in 2012. Just 126 of them had declared Australian settlors. Some of the trusts were said to hold billions of dollars. By early 2016, at those registration rates, the total number of trusts would be around 11,000. Back to “Chalkie”:

Of course, New Zealand could help by giving other authorities the same privileges as Australia, but for some reason we choose not to.

Chalkie can’t help wondering why New Zealand maintains a regime so obviously advantageous to tax dodgers and criminals. We’re not only not part of the solution, we’re a big part of the problem.

One answer to Chalkie’s question is this: there is now quite a collection of well-connected smart lawyers servicing this clientele. It’s a business worth around NZD 20Mn per annum, according to NZ’s International Funds Services Development Group; or even NZD 50Mn, according to the NZ Herald, in their November 2012 exposé. It can afford a little bit of expenditure on lobbying.

One of these smart lawyers, a fellow called Geoffrey Cone, of Cone Marshall, shows up in the NZ Herald the week after the exposé, to tell the world there’s nothing to see here after all.  Handing a platform to a lawyer specialising in offshore trust work hasn’t always gone well for the NZ Herald, but the Herald only found out about the risks much later.

Here’s how Cone characterizes the daft 2006 non-reform reform that threw a crumb in the direction of the Australians and waved a middle finger at the rest of the world:

New rules in this area were introduced by Michael Cullen in 2006 after extensive consultation. Under this rigorous regime, a New Zealand resident trustee of a foreign trust is required by the IRD to submit a Foreign Trust Disclosure form (IR607) and to keep financial and other records for New Zealand tax purposes.

These include the trust deed, details of settlements and distributions (including the recipient’s name and address), details of the trust’s assets and liabilities, and money that the trustee receives and spends.

Here’s a funny thing: that doesn’t seem to coincide with the actual experience of actual overseas revenue authorities. By 2014, Cone’s claim that all is well looks threadbare:

The Inland Revenue Department is taking aim at the use of New Zealand trusts by foreigners to shield their income and assets from tax in their own countries following pressure from its overseas counterparts, the Business Herald understands.

IRD says it intends reporting to Revenue Minister Todd McClay on that issue before the end of the year and will release consultation documents in mid-2015.

The majority of New Zealand service providers are lawyers and accountants and many are also qualified members of the international Society of Trust and Estate Practitioners (STEP). They usually work with counterparts who have the same responsibilities and skills in the countries where the clients live.

We don’t compete with tax havens, but instead with jurisdictions such as Singapore, Britain and the US, all of which have a transparent tax system and apply similar taxation principles in relation to their foreign trusts.

Undermining this message, just a little, the next STEP Latam conference will be taking place in tax haven and perennial opacity bad boy Panama, in September 2016. A representative of Cone Marshall is on the attendee list.

Undermining the message a little more, here are the 181 Panamanian bearer share companies for which Cone and Marshall have been acting as nominee directors.

Undermining the message even more, here’s a diagram from Transparency International (Slovakia) in which New Zealand companies created by Cone show up, concealing the involvement of one Juraj Široký in a tottering Slovakian company called Váhostav.

Here’s more from The Slovak Spectator on Juraj Široký. He has an interesting past:

WHEN Juraj Široký left the Czechoslovak embassy in Washington two decades ago, following his posting as secret agent and second secretary, he didn’t forget about his colleagues in the communist intelligence service.

After the 1989 revolution he continued to do business with them, first within an infamous asset-stripping operation known as the Harvard funds, and later within Slovak chemicals groups Chemolak and Plastika.

Today, Široký’s “spy circle” has contacts with people at the top of the Economy Ministry under the Fico government, including minister Ľubomír Jahnátek from the ruling Smer party. Companies under Široký’s wing last year won two tenders from the ministry together worth Sk120 million (€4 million).

Under the Fico government, Široký’s firms have won several multi-million-euro contracts to build highways and renovate Bratislava Castle. He got his start in business in the Czech Republic as the partner of Viktor Kožený, dubbed the ‘Pirate of Prague’, who is currently on trial in the Czech Republic for looting billions of Czech crowns from the Harvard investment funds in the mid-1990s…Kožený is currently in the Bahamas, beyond the reach of the Czech courts.

Široký did not respond to questions about his past from The Slovak Spectator. Economy Ministry officials denied that the businessman, who is widely regarded as one of the most influential figures behind the Smer party, had any influence over public contracts.

One can’t help noticing a couple of other things in passing.

First, one of the NZ companies, Torrelaguna Limited, which has a trio of Costa Rican stooge directors, still hasn’t got around to appointing the mandatory NZ resident director, a legal requirement that came into force in May 2015. The additional 180 day grace period that gave companies ample time to appoint an NZ resident expired months ago. This company should be struck off. It might be worth a look at the other 1,000 companies in Cone Marshall’s NZ portfolio to see how many more there are like that.

Second, Torrelaguna’s shareholders are five Costa Ricans, each owning 20% of the company. Transparency International’s research suggests that this isn’t a particularly accurate depiction of Torrelaguna’s ownership and control but how on earth can one check, in general? Getting Ultimate Beneficial Ownership disclosure right is going to be hard, in New Zealand and elsewhere.

An investigator of the National [Criminal] Agency (NAKA) filed charges against three persons from the management of the construction company Váhostav-SK on March 14. They are suspected of committing a crime of giving preference to a creditor. By their doing they might have caused damages of almost €7 million, the SITA newswire reported.

New Zealand is helping out:

Last December Denisa Baloghová, spokesperson of the Police Presidium informed that the investigator had interrogated more than 20 witnesses and carried out several other proceedings to find out the facts of the case. At that time she said that the police also asked several countries for legal assistance, including asking colleagues from Costa Rica, New Zealand, or Cyprus …

All of this non-foreign-trust-related Váhostav and Cone control-hiding skulduggery does make one curious about exactly why it was that Mr Cone was so keen to rubbish the idea that New Zealand foreign trusts were of any concern to transparency advocates. Might he be active in the formation of control-hiding New Zealand offshore trusts, perchance?

Whatever: we think that Mr Cone was mistaken in his assessment that there’s nothing to see. Right now there’s a government corruption scandal underway in Malta, and overseas press coverage is pointing the finger at Panama and at NZ foreign trusts… 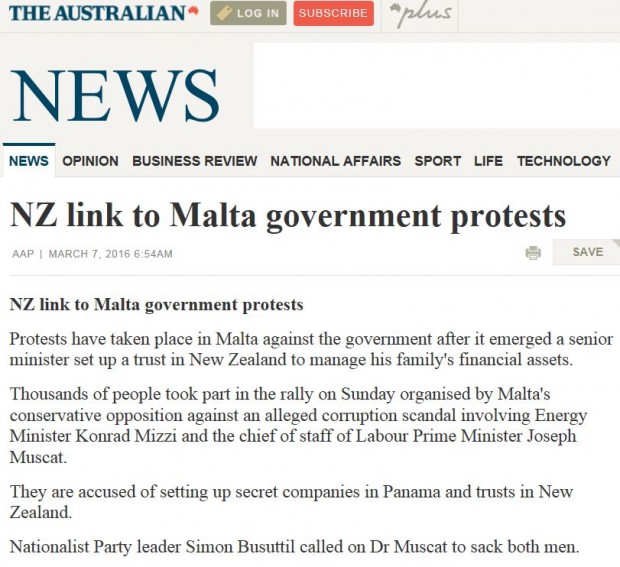 Mind you, perhaps the current NZ Government simply don’t mind what kind of attention they get from their big Antipodean neighbour, and from the world’s press in general. Here’s some more, from Europe: 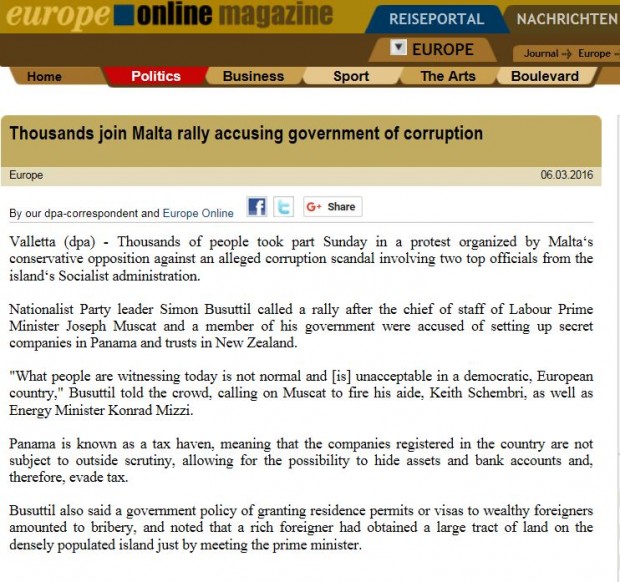 Alternatively, NZG may well be wishing they’d not just ignored early warnings of the scandal to come, back in 2012. The chickens, in the form of 11,000 NZ foreign trusts, are simply going to keep coming home to roost now.  There is going to be a large and noisy mess.