Yves here. Note that the author has focused on one under-investigated health indicator. Higher suicide rates have garnered some attention. There are no doubt others, like increases in depression and substance abuse, that have not been studied much if at all.

One of the many impacts of the Global Crisis was on stress levels, and these can be a risk factor for adverse birth outcomes. This column shows that exposure to the Crisis resulted in a significant reduction in the birth weight of babies in Iceland, comparable in size to the effect of smoking during pregnancy. The full costs of poor health at birth as a result of the Crisis will not materialise until the children exposed in utero become adults.

The economic costs of financial crises are large. Much effort has been put into quantifying the direct economic costs due to unemployment, production contraction, and wealth destruction associated with the 2008 Global Crisis. The estimates show that the Crisis and its aftermath have been distinctive; in the US, where it was responsible for the destruction of around 44% of the median household wealth (Wolff 2014), it was the worst downturn since the 1930s, and the suggested cumulative loss in world output associated with the Crisis lies in the range of $5 to $15 trillion dollars (Adelson 2013). The Crisis might, however, have had other more subtle but still direct costs. Because financial difficulties may raise stress levels among the people they affect, and stress is a risk factor for adverse birth outcomes, children who were in utero during the downturn might be at risk of being born with poorer health endowments. Despite the pervasiveness of financial stress in advanced economies, we have very limited understanding of the effect on health at birth. My research attempts to fill this void.

Exposure to the Crisis and Health at Birth: New Evidence

In a recent paper (Vardardottir 2016), I use administrative data from Iceland to study how in utero exposure to the 2008 Global Crisis affected health at birth. I find that first-trimester exposure to the Crisis led to a sizable and significant reduction in birth weight, increased the probability of a low birth weight (<2,500 grams), and decreased the probability of a high birth weight (>4,000 grams). I also find evidence that the economic collapse lead to declines in male births and thereby reduced the sex ratio, which is consistent with maternal prenatal stress exposure inducing a selective mortality of the least fit foetuses through increased miscarriages, where weak male foetuses are significantly more affected than female foetuses.

Health at Birth Lingers into Adulthood

Does health at birth matter? In recent years, scientists have been developing a new understanding of our earliest experiences and the ways in which various conditions present during pregnancy contribute to negative health outcomes early in life and exert lasting effects on us well into adulthood. Empirical evidence shows that conditions encountered before birth influence birth outcomes and linger into adulthood; initial health endowments matter for long-term health, human capital, labour market outcomes, and various other measures of life success. For instance, marital status has been found to be negatively affected by early childhood exposure to the 1959-61 famine in China, welfare dependency and the probability of living in a low-income neighbourhood are increased by in utero shocks, and economic conditions at birth matter for mortality later in life (see, for example, Almond and Currie 2011 for a survey of the literature). This evidence suggest that if the Global Crisis caused poor birth health, its full costs will not materialise until the children exposed in utero become adults, and the costs of the Crisis will continue to be paid for decades.

The Collapse of the Icelandic Economy

The Icelandic economy fell apart during the Global Crisis. The collapse was the most severe, relative to the size of the economy, that any country has suffered. Iceland’s three biggest banks, which accounted for about 85% of its financial system, failed in the same week. These events had immediate and catastrophic effects on the economy that came as a shock to the majority of the population.

The reasons for the bank failures were difficulties of the sort experienced by many financial institutions worldwide. The crucial differences here were the scale of the collapse and how sudden and unexpected it was. While many countries had their share of troubled banks, their problems were largely confined to just a segment of the whole banking system, and the overall assets of those banks were much smaller relative to local GDPs. Other governments thus had adequate resources to contain the fallout from individual bank failures. That was not the case in Iceland. Iceland appealed to the IMF for an emergency loan, the first western country in 30 years to do so.

The clear break in the economic trajectory, evident in Figure 1, made it feasible to capture the effect of the Crisis on children exposed in utero because it eliminates the problems posed by the diffuse timing and endogenous sorting normally associated with economic hardships.

Estimating the Effect of the Crisis on Birth Outcomes

Capturing the causal effect of the Crisis on health at birth is a non-trivial task. Individuals that have children during crisis times are different from those having children during normal times; the slide into recession is typically slow, allowing individuals to select into pregnancy based on economic conditions. Estimation of the effect of financial crises by comparing those children born during crisis times to those who have children during normal times is therefore confounded by selection into pregnancy during recessions.

In my research, I use two methods to overcome the selection problem and estimate the effect of the Global Crisis:

The findings from the study of the effect of the Crisis in Iceland on birth outcomes suggest that financial stress, a common stressor in advanced economies, has an impact on birth weight among first-trimester exposed children.

This is consistent with the selection in utero hypothesis, predicting that population stressors induce selection against males in utero, and thereby reduce the sex ratio at birth. Figure 2 shows the changes in these birth outcomes around the time of the collapse. Each dot in the panels corresponds to the average outcome for children by birth month.

Figure 2. Birth outcomes around the time of the collapse 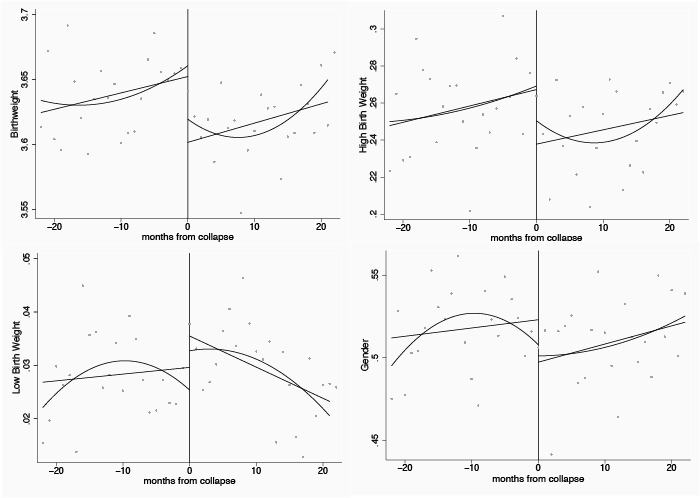 A comparison of these findings with those of previous studies reveals that financial stress, a commonplace stressor in advanced economies, has an impact on birth weight comparable to one of the most widely cited behavioural taboo during pregnancy, smoking (e.g. Tominey 2007). Furthermore, compared to the effects of rare, extreme events, the average loss of birth weight due to the 2008 Crisis is quite large; it is more than eight times as great as the 8.7g reduction caused by landmine explosions in Colombia (Camacho 2008) and bigger than the reduction caused by earthquakes in Chile (Torche 2011). The effects are also large compared to the estimated effects of other near-universal stressors like bereavement, which has been found to reduce birth weight by 23g (Black et al. 2016).

The study of the Icelandic collapse contributes to our understanding of the impact of economic stress on child health and the findings are of high relevance in other advanced countries where financial stress is among the most common stressors. The most striking fact about the results is that financial stress in an advanced country, one where the social safety net of welfare systems and policy interventions secures access to health care and all basic needs for the population, can still have a very large impact on birth outcomes. Financial stress is prevalent in households worldwide, and this study provides evidence that it can affect more than peoples’ wallets: It can also have a detrimental effect on their children’s health at birth, which has been shown to be important for later success in life.