Britain will hold a referendum on whether to stay or leave the EU. Current polls point a very close vote. This column argues that Brexit could have serious economic and political consequences for the rest of the EU. The economic and financial frictions could be limited if both parties try to strike an amicable separation agreement. But political considerations, including the desire of the rest of the EU to prevent Brexit emulation, might result in a far more damaging outcome, not just for the UK.

Britain will hold a referendum over whether to stay in or leave the EU on 23 June. Current polls point to a very close vote. Brexit is not our base case, but the probability we assign to it – 30% to 40% – makes it a material risk.

Analysis of the potential economic and political consequences for the UK is growing. At Citi, we conclude that while the precise economic impact will depend on many factors, including the future trade arrangement between the UK and the rest of the EU (EUx), its direction will be highly negative. We are particularly concerned about political uncertainty in the UK, including a possible disintegration of the UK into its more pro-European (Scotland, Wales, and Northern Ireland) and less pro-European parts.

Unfortunately for the rest of the EU, Brexit would not be a zero-sum game – nor would the economic and political losses be confined to the UK. The rest of the EU would also take a hit, even if we expect the economic impact to be milder than in the UK. UK trade is a far smaller share of GDP for the EUx than EUx trade is for the UK. The assessment of the potential economic and political fall-out from a British vote to ‘leave’ is likely to determine the negotiation strategies of both the UK and the rest of EU over a follow-on deal. We note that technically, there would be no negotiations about the terms of access (in all economic dimensions) of the UK to the rest of EU; the EUx would determine (according to the Treaty unilaterally) the future terms of access of the UK to the EU. The UK would, of course, set the terms of access of the rest of EU to the UK (in all its economic dimensions). The negotiations on future economic (and political) relations between the UK and the rest of EU would, however, likely be very asymmetric with negligible bargaining power for the UK – much less even than in the negotiations on the EU changes required to keep the UK in the EU.

Most likely, the UK would trigger Article 50 of the EU Treaty shortly after a vote to leave. That would set the clock ticking for a withdrawal agreement to be reached within two years, or else the UK would revert to the default trade arrangement with the EU governed by WTO rules. In this worst-case scenario, the EU would apply its external customs duties on UK goods and services as well as erect significant non-tariff hurdles such as regulations and licenses. For example, passporting of banking and other financial activities would cease. The rest of the EU would be free to impose material restrictions on London’s ability to conduct euro transactions and euro-derivatives transactions. UK citizens could lose the automatic right to work in the rest of EU.
An anatomy of the UK/EU economic links

Along with the US and China, the UK is currently one of the most important trading partners for the other EU states. In 2010-2014, total exports to the UK were 2.9% of EUx GDP, and total imports from the UK were 2.4% of GDP. Trade in goods such as cars, machinery, and chemicals dominates the EUx’s trade volumes with the UK, constituting about 70% of total exports and imports of goods and services. In goods trade, most EUx member states are running a sizeable surplus with the UK, in total 0.6% of EUx GDP in the past five years (see Figure 1). This surplus almost disappears, however, when accounting for foreign value added in exports, which was 30% in 2011 for EUx goods exports to the UK and 23% for UK goods exports to the EUx, according to OECD data. In services trade, most EUx countries are running deficits with the UK, amounting to a total of 0.2% of GDP. This is almost entirely driven by financial services, while deficits of the EUx in other parts of services trade are offset by surpluses in tourism.

Leaving aside indirect effects and temporary bumps during the negotiation period, a symmetric 10% one-off decline in exports to and imports from the UK would lead to a one-off reduction of EUx GDP by 0.05% (based on current account data), with negative effects from goods trade outweighing net positive effects from services trade. Subsequently, trade growth would likely be lower than otherwise, increasing the potential losses over time. The damage would be a bit more severe in the manufacturing hubs in central and eastern Europe as well as in the tourism hotspots in the Mediterranean. 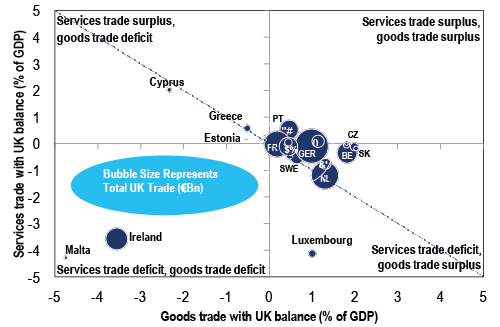 To minimise potential economic losses, the EU might focus its post-Brexit negotiation strategy on free trade for all goods and some services like tourism, where it is running a surplus. By contrast, limiting UK-based financial firms’ access to the EU’s internal market for financial services might set in motion an import substitution process which may eventually benefit at least some EUx member states. However, financial services trade barriers would still be disruptive at least in the short run given the UK’s near-monopoly in some sectors. If the rest of EU states fail to replicate the UK’s financial services productivity, they would end up permanently worse off when ignoring the short-term Keynesian (demand-driven) benefits.

One lesson from the turbulence of the past eight years is that financial links transmit economic calamities from one country to another almost instantaneously and often amplify the original shock. Avoiding a financial crisis is also likely to feature high on the list of the EUx’s negotiation priorities. In the case of Brexit, the stakes look particularly high, with the UK exposures of EUx banks, companies, governments and households dwarfing those to Greece in 2012. And even those were sufficient to throw the Eurozone economy into extended turmoil. With UK assets held by EUx residents worth nearly half of the EUx GDP (based on ONS international investment position data), a complete breakdown in relations could easily reduce EUx wealth by a few percentage points of GDP and, in some cases, put additional strains on already-challenged financial systems.

A financial crisis remains unlikely in our view and the economic cost-benefit calculus of Brexit might not even be entirely negative for the EUx. For example, EUx member states may try and usurp the UK’s position as the EU’s most popular destination for foreign direct investment. Over the past 15 years, the UK has received more than 20% of inward EU FDI, but without full access to the EU’s internal markets, future FDI flows into car factories or financial services hubs that would have gone into the UK had it remained a member of the EU might be redirected and create jobs elsewhere in the EUx. 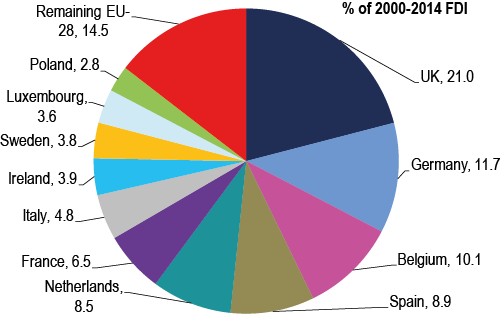 The Brexit impact on the rest of the EU via trade and finance will depend on the follow-on agreement between it and the UK. A number of models exist: Norway’s, Iceland’s, and Liechtenstein’s membership of the European Economic Area (EEA) or Switzerland’s European Free Trade Area (EFTA) agreement come close to full membership of the EU’s internal market. Only EEA membership would guarantee free mobility of labour, while EFTA membership can include it (and in the case of Switzerland, does). A Turkish-style customs union would cover most goods trade sectors, but the Swiss and Turkish models crucially exclude financial services. Free trade agreements such as those with Mexico or South Korea would also establish free access to the EU’s internal market, at least for goods trade. The extension of such agreements to the UK may face political obstacles, but at least the economic damage could be minimised.

Without the ‘unruly’ UK, EU decision-making may become slightly simpler, particularly in areas where unanimity is required such as most taxes and social security. This would not necessarily be a net positive, however, if the decisions taken more swiftly and easily without the UK as an EU member were significantly worse than those taken with difficulty and significant delays with the UK as an EU member. Clearly, the weight of the ‘market-friendly/liberal’ block in the EU (whose current core members include the UK, the Netherlands, Sweden, Denmark, and Estonia) would decline, potentially making the EU less market-friendly. The EU budget would also have to do without the €5 billion or so of net UK contributions (19% of total net contributions to the EU budget in 2014).

But the real political risk, in our view, is that Brexit would set a new and awkward precedent. It could trigger chain reactions, such as a backlash against any notion of ‘ever closer union’, even where this makes obvious sense, as in the areas of defence, foreign policy, defending the external boundaries of the EU, and certain aspects of environmental policy. Brexit could also encourage national exit movements elsewhere. The anti-EU mood in many EU member states, as reflected in the growing strength of nationalist, nativist, and populist parties in the EU, should not be underestimated. There could also be a rise in regional separatism (e.g. in Flanders, Catalonia, the Basque country or Northern Italy). The rejection of any form of supra-nationalism exemplified by Brexit could also further increase cross-border bail-out fatigue in particular in the Eurozone.

It is not our base case that the UK exits the EU. If it did happen, it could have serious economic and political consequences for the rest of the EU. The economic and financial frictions could be limited if both parties would try to strike an amicable separation agreement, but political considerations, including the desire of the rest of the EU to prevent Brexit emulation, might result in a far more damaging outcome, not just for the UK.

A loss in soft power for the rest of EU following Brexit would be near certain, in our view. Brexit would likely further boost (intra-national and inter-national) political fragmentation in the EU and raise the risk of further EU and Eurozone disintegration. Brexit could therefore have very severe political ramifications for the rest of the EU, even if the immediate economic effects remain modest. The EU without the UK would be an even more impaired regional and geo-political player than the current EU, which already punches far below its economic weight as regards regional and global diplomatic, strategic, security, and military matters. The step from soft power to no power could well be a small one.