“TTIP is not primarily about removing tariffs and quotas. The average tariff levied by the US on goods from Europe is just 2.5 per cent. Getting rid of them would be worthwhile – but no big deal” [Conservative Home]. “It is mainly about harmonising product specifications and creating a special regime for investment. … In or out of the EU, we should question whether ISDS tribunals are necessary, reject the 20-year stabilisation clause and insist on excluding the NHS from the treaty (as France has excluded movies). That would be less difficult if Britain leaves the EU and negotiates a parallel treaty – though the simplest thing would be to negotiate a pure free trade agreement restricted to abolishing remaining tariffs.”

“Let’s start with my favorite area in which to expand trade, highly-paid professionals. Our doctors and dentists, and to a lesser extent our lawyers, make far more than their counterparts in other wealthy countries. This is not the case for our autoworkers and steel workers” [Dean Baker, HuffPo]. “We can correct this imbalance by removing the barriers that make it difficult for foreign professionals to practice in the United States…. If taken together, bringing the pay of dentists, lawyers, and other highly-paid professionals more in line with global competition led to comparable gains, we would be looking at benefits of $180 billion a year or $600 per person. This vastly exceeds any projections of gains from the TPP.”

Sanders getting it right early on what became #PanamaPapers:

UPDATE The headline: “What Bernie Sanders Gets Right.” Mark Thoma (!), quoting Sanders: “We are moving rapidly away from our democratic heritage into an oligarchic form of society…” [Fiscal Times]. Thoma: “I don’t know if the forces that have allowed special interests to become so powerful can be overcome, but I am far more optimistic than I was before this year’s presidential campaign that change is on its way”

AMY GOODMAN: She says you’re a Bernie Sanders representative who was trying to bird-dog her. Is that true?

EVA RESNICK-DAY: It’s absolutely not true. I am a democracy organizer for Greenpeace USA. I have no affiliation to the Sanders campaign. And Greenpeace is an independent organization that does not support or oppose candidates.

UPDATE “Optimism Is a Casualty in Campaign 2016” [Wall Street Journal].

UPDATE “At its heart, this anger is economic. Ever more Americans are having trouble making ends meet. Many of the jobs created since the financial crisis are low-wage. And voters do not expect better incomes in the future. For a nation accustomed to believing that each generation would live better than its predecessor, this is a bitter pill” [Roger Altman, Financial Times, “The fury of American voters is in its infancy”]. “This economic pressure is not temporary either, because the trends undermining incomes — technology and globalisation — are in their early stages and still accelerating.” Feh. Technology and globalisation are curtains. Behind the curtains is a man. To whom you should pay no attention. Author was a Deputy Treasury Secretary under Clinton I.

Quinnipiac: 37. The old way of doing things no longer works and we need radical change:

NBC National poll: “Clinton has 51 percent support heading Tuesday’s primary. But Sanders is beating Clinton by more than 20 points among independents who lean toward the Democratic Party” [The Hill].

“To Hillary Clinton supporters: The facts on where the race stands” [Robby Mook, Medium]. If you’re explaining, you’re losing.

“TRANSCRIPT: Bernie Sanders meets with the Daily News Editorial Board” [Daily News]. Establishment framing: “Bernie Sanders Struggles To Explain How He Would Break Up The Banks” [Talking Points Memo]. Unlike TPM, I read the transcript as a serious discussion on both sides. What amazed me is that Sanders interlocutor seems to regard what Teddy Roosevelt called “trust busting” as if it were being propagated by Martians.

“Bernie Sanders’s false claim that he has released his full federal tax returns” [WaPo]. Guy can’t even afford a haircut, and Clinton gins this up. Pathetic.

Barney Frank on Sanders: “Because of this kind of lack of information and, I think, misunderstanding of how you really get change done in America, a large chunk — a third, I saw recently quoted — say they won’t vote for Clinton. That’s why [Sanders] does better now” [Raw Story]. Right. I mean, look at the abolitionists! Or the Civil Rights movement! Or ACT-UP! And Sanders voters are low information?

“Ted Cruz Affair Rumors Circle After National Enquirer Claims Madam’s Black Book Proves Cheating Scandal Is Real” [International Business Times]. “Palfrey’s lawyer, Montgomery Blair Sibley, wants to release the names and numbers in the book because the information is important for “voters [to know] before they cast their ballot.”

Gallup US Economic Confidence Index, March 2016: “Americans were slightly more confident in the economy in March than they were in February; however, their confidence has not drastically changed in the past nine months” [Econoday]. “In the most recent polling, 39 percent of Americans said the economy was “getting better,” while 56 percent said it was “getting worse.” This resulted in an economic outlook score of minus 17, up from minus 20 in February.”

PMI Services Index, March 2016: “The bulk of the nation’s economy expanded but only modestly in March based on Markit Economics’ service-sector sample” [Econoday]. “But the improvement does not include new orders where growth, in an ominous indication for overall activity in the coming months, is at its lowest point in the 6-1/2 year history of the report… The order readings in this report point to increasing slowing for the economy’s main engine, services.”

ISM Non-Mfg Index, March 2016: “The ISM non-manufacturing index rose a sharp 1.1 points in March to a 54.5 level that points to solid economic growth for the great bulk of the nation’s economy” [Econoday]. “This report is very positive and contrasts sharply with the very soft services report released earlier this morning from Markit Economics.”

ISM Mfg Index (yesterday): “The shallow industrial recession we have had for the last year is ending, either now or within the next 3 months” [Angry Bear].

International Trade, “The nation’s February trade deficit came in at a wider-than-expected $47.1 billion in a report, however, that mostly points to rising cross-border demand” [Econoday]. “The spots of weakness on the export-side [capital goods, and services] are a concern but this report is mostly positive even though, given the wider-than-expected headline, it will scale back first-quarter GDP estimates.”

“Now, for only the fourth time since data the early 90s, there have been no tech company I.P.O.s in a quarter” [New York Times].

“A degree of tunnel vision has prevented startup entrepreneurs from seeing that their business model often is not scalable or sustainable at the billionaire unicorn leve without ongoing VC welfare subsidies” [Salon]. “Some things that seem like great ideas—like paying low wages to personal assistants to shuffle around at your every whim, or lowballing wages for someone to hustle around parking cars for yuppies—only make sense inside the VC bubble that has lost all contact with the realities of everyday Americans.” Valuation problems in the Valley.

“Groupon, the daily deals ecommerce operator which has been struggling since a hot public share offering, said Monday it received a $250 million investment from a private investment fund” [France24]. “Groupon said it would use the cash infusion from Atairos to boost share repurchases [!!] and to revive growth.” More valuation problems.

“Is anyone concerned about the future of Nest?” [Reddit]. Yet more valuation problems.

“Not surprisingly, though, a lot of people are asking: If this is the biggest data leak in history – and our biggest window ever onto the offshore world – where are all the Americans?” [Fusion]. Why go to Panama if we’ve got Delaware, Nevada, and Wyoming?

“[T]he U.S. is itself becoming a tax haven” [WaPo]. “Providers in rich countries in the OECD — including especially the United States — were much happier to set up shell corporations. Only three out of 27 U.S.-based providers demanded some proof of identity.”

“Banned on China’s Internet: all discussion of the Panama Papers” [Boing Boing].

What is strange, however, is the level of venomous excess found in nature. Why does a snake possess the capability to kill hundreds of thousands of mice with each bite? This is especially odd when you consider what an expensive weapon venom is” [BBC]. I should really file “venemous excess” under 2016….

“Given that Vox does little original reporting, much of their selling point is quick, easy-to-understand analysis. A meaningful amount of this analysis, however, pivots on the toxic cliche, “most economists agree/think/say/believe,” and its equally toxic cousin, “most experts agree/think/say/believe.” This cliche is frequently used without a shred of evidence for said consensus” [FAIR]. Ouch!

“Etsy Wants to Crochet Its Cake, and Eat It Too” [New York Magazine]. “Can a company upend capitalism without really earning a profit?” I wanted to make fun of tea cozies and the Brooklyn flannel, but then I felt there was more there. Readers, I’d like to know what you think of this (even though it’s a long read). And are any of you selling on Etsy? Is it a long tail phenomenon?

“The Brainbelt Awakening” [Foreign Policy]. Yet another in a recent spate of writers going out into the heartland to see what the heck’s going on out there where the Acela doesn’t go. This a different take from most, and if there are in Akron, or Research Triangle Park, or Lund (Sweden), I’d be interested in your views. (“Brainbelt” is a play on “Rustbelt.”)

“An illusion of success: The consequences of British rail privatisation” [Science Direct]. “The starting point for this analysis is a paradox between stories of brilliant success achieved by private train operating companies (TOCs), and a financial backdrop of accumulating public liabilities and complex state subsidy arrangements.”

“Satellite Images Can Pinpoint Poverty Where Surveys Can’t” [New York Times]. The headline is triumphalist and deceptive. Integrating a lot of data sources, some of them aerial, may help.

“Google is intentionally bricking hardware that I own” [Medium]. Ha ha. “Own” “hardware.” What a kidder!

“Want to avoid being auto-tagged by Facebook, Google photos, flickr, and the like? Want to create a party environment for all your cohorts that ensures all attendees remain unrecognizable to the collective scrutiny of the bots? Whether you’re familiar with the Many-faced God or not, you can benefit from the dark magic that streams from its collective. Here’s how” [Indistinguishable From…].

For all you people with shelves of O’Reilly books:

How to make the hiring process as arbitrary and subject to bias as possible. pic.twitter.com/dizvhXP4mc 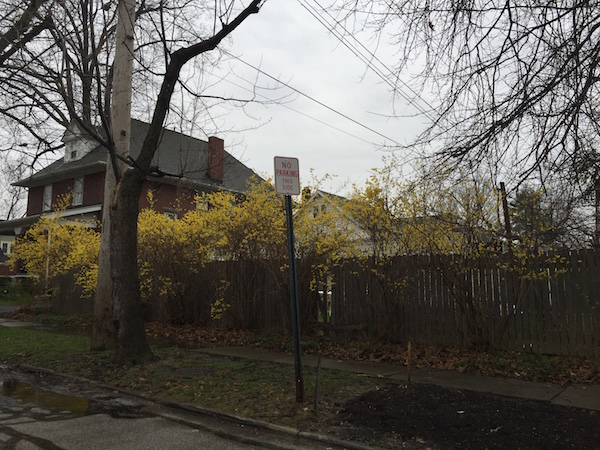 Early April, Cleveland. I love forsythia, the most hopeful sign of all! (At least in the Northeast…)