Senator Sanders telling Andrea Mitchell he will campaign until the last primary vote is counted; also, that’s its on Clinton to convince his supporters she’s offering policies they can vote for.

Earlier I said I wanted to take a “look ahead” at what’s likely to occur in the next few months and also in the next few years, since we’re clearly at a major crossroads in the nation’s (and the world’s) future. In particular:

I want to start taking a look ahead, not in a long essay but in chunks. “Ahead” means what happens at the Democratic convention, what those outcomes may be, what happens in the general election, and furthest out of all, what happens in 2017 and beyond. So this will be a series of sorts.

The first piece looked at this core point and its corollary:

1. If Clinton is the nominee, she must win Sanders supporters or risk losing to the Republican, whoever that is.

In my view and the view of many, Clinton’s success in the general election depends on appealing to the voters she’s currently disrespecting — Sanders supporters, first-time younger voters (those who only want “free this and free that” and don’t do their own research), and non-party-affiliated independents (the ones who can’t vote for Sanders because they are locked out of closed primaries like New York’s).

The corollary (point 1a) describes today’s independent voter, not as some imagined between-the-parties “Reagan Democrat,” but as modern radical independents, people in both parties who (1) reject the bipartisan money-washed system, and (2) are suffering personally because of it. Modern independents now comprise 42% of the country.

Frankly, the future of the country, at least until the climate overtakes us, hinges on the two points above. It seems clear that the national rebellion against big-money rule by both parties, which is well underway, will either find an electoral expression (Sanders or initially, Trump) or will fail in its attempt to find an electoral solution. (Trump will eventually fail to satisfy this revolt, as discussed briefly here and in this Michael Parenti comment: “Fascism is a false revolution. It makes a revolutionary appeal without making an actual revolution. It propagates the widely proclaimed New Order while serving the same old moneyed interests.” But that discussion is for later.)

As I see it, in all cases but a Sanders nomination, the next phase of the revolt will occur outside the electoral process and outside the rules of Establishment authority. This doesn’t necessarily mean pitchforks and torches. It can range from something as mild (but effective) as Occupy and Nuit Debout (“up all night” protests) in France, to angry, active Ferguson-style street events. 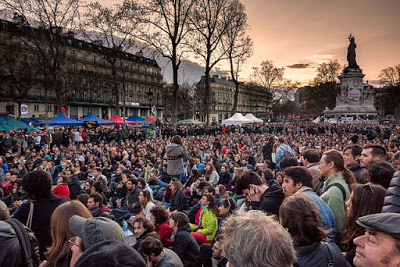 One of the Nuit Debout protests at Place de la République in Paris (source; click to enlarge)

Consider, for example, a national student debt strike as a non-violent, anti-Establishment rebellion. At some point, people who see themselves as having “no economic future” and “zero hope of working in my profession” (as one early-30s woman, in tears, described herself to me at Netroots Nation) will rise up and just refuse to pay. This is a direct assault on the bankers who hold her debt and who have paid Congress to make sure her debt is not dischargeable in a bankruptcy.

Refusing to pay is an act of rebellion. Refusing to pay en masse is rebellion with teeth, just like the Bernie rebellion, except outside the electoral process. It will force a response, likely an angry state-sponsored one.

As I’ve been writing almost from the start of doing this work, the whole game since the 1980s was to deprive the nation’s workers of good jobs; load the country with debt — so people could chase the “lifestyles of the rich and famous” with credit cards and mortgage-backed loans instead of real income — then make the government make sure no debt is forgiven.

That’s the whole game in a nutshell. A debt strike is an assault on that game, just as the Sanders candidacy is an assault on it. Neither assault can be allowed by the money-serving Establishment, but one form of assault is infinitely preferable to the other. Most sensible people do and will prefer electoral solutions.

My point again — if Sanders is not nominated, there will be no electoral solution (unless Clinton reverses a lifetime of pro-money policies), and the conflict will move into the next, non-electoral arena.

Three Visible, Simultaneous Contests, Not Just One, in the Democratic Primary

Let’s look at the time period between now, roughly midway through the primary season, and the July Democratic convention in Philadelphia. To continue our enumerated points:

Sanders is winning the first race by a large margin, is tied or leading in the second, and is rising from behind in the third. The Democratic contest isn’t just about pledged delegates. It’s also about the optics of the Democratic nomination as seen by national voters, a nomination that will culminate in the convention in Philadelphia. The nominee coming out of that convention will be judged by voters of the nation, all of them, in terms of those optics.

Here’s what that means. Assume the leaders of the Democratic Party want to win in November — not a safe assumption, but let’s assume it anyway, since the country is both making that assumption and being led to make it by the press. (I personally think most Party leaders want Clinton nominated anyway, regardless of how they get her there. But I’m not the usual, casual, semi-paying-attention contest-watcher.)

Now consider the three races going on in the Democratic primary contest:

How are those races going?

Sanders Winning the Race for Funding

Bernie Sanders is winning the first race hands down, and it’s being noticed. The following compares Sanders’ and Clinton’s fundraising through the end of March (my yellow highlight) as released by the campaigns in early April (current March numbers from FEC filings are very slightly different). This does not include super PAC money, just contributions to the campaigns themselves. 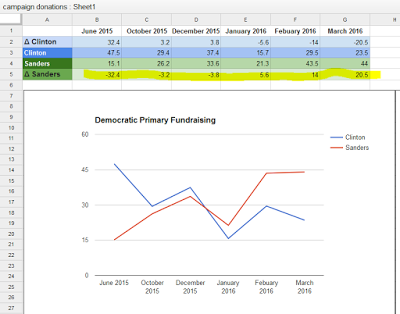 Sanders has actually outraised Clinton in total “hard money” at this point, $182 million to $180 million, as this All In with Chris Hayes segment explains (h/t GottaLaff for the clip):

Notice Nick Confessore’s comment about Clinton having to find new donors since so many of her current donors are maxed out, i.e., have contributed all the “hard money” to her allowed by law.

Sanders Tied and Rising in the Race for Popular Support

If you look at the national Clinton vs. Sanders national polling at an aggregate site like Huff Post or Real Clear Politics, you see a dramatic narrowing to a statistical tie, with Sanders starting to lead in a few. And this is only April in a race that ends in June — the start of the third quarter, in other words. For example, the following shows Sanders slightly ahead of Clinton in the Reuters five-day tracking poll through the third week of April and just after the New York primary:

Sanders Behind But Rising in the Race for Pledged Delegates

As predicted, Sanders lost badly in the Deep South (front-loaded races in which he had little name recognition, in states which no Democrat will carry in November). Then he reversed the Clinton lead and has been steadily climbing back, visible evidence of momentum.

Here’s a chart of the pledged delegate differential prior to the mid-Atlantic series of primaries: 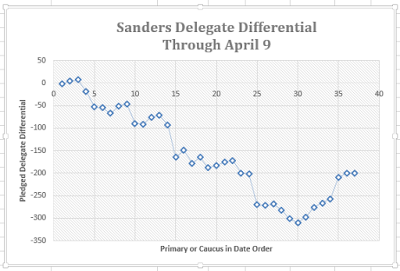 I haven’t included contests later than April 9 because of the lawsuits and investigations that challenge the New York election results. Initial New York results shows Sanders giving back 31 delegates of the 100 delegates he had regained since the Deep South voted. But if the New York city election challenges prevail (and they are serious), that result will change the rest of the graph, perhaps dramatically. His initial post-New York delegate loss could easily be revised in his favor, changing the rest of the chart. (Click here for a county-by-county map of the Democratic primary results in New York.)

Democrats at the Philadelphia Crossroads

Regardless of the result, however they may be revised, of the troubled mid-Atlantic elections, each of the following statements are true:

Can you see what that means coming into the convention? Imagine that Sanders continues to win the money race, lead in the national polls by, say, 10 points or more, and has another big delegate surge in the fourth quarter of the delegate race, the post-East Coast phase. Now add in that Sanders beats all Republicans by more than Clinton, and that Clinton even loses to some of them. (A recent poll, in fact, has her in a statistical tie with Trump, up only 3 points and within the margin of error, while Sanders trounces Trump by 10 points.)

This isn’t about what Sanders will do coming into the convention. Sanders doesn’t have to do anything but show up and let the process play out. The pressure, if there is any, will come from the voters. The whole nation will be watching, will see all of this. What will the Democrats do with all eyes on them? And how will the nation respond if they stick with an underwater but pre-ordained “inevitable” pick anyway?

This leads to our third principle:

3. Democrats may not be able to win in November if they appear to force the least desirable candidate on the public.

Remember the first two principles above. Clinton can’t win the general election without independents, the “radical independents” who support Sanders and Trump. She can certainly wrap up the nomination (or not), but if she does, she will have done it with a jiggered, Debbie Wasserman Schultzed process; by winning states no Democrat will win in November; by winning mainly in contests in which only Democrats could vote.

Note the word “appear” in the bolded statement above. This is not about the rightness or wrongness of what the Democrats do on arrival in Philadelphia. It’s about how what they do will look to people who will vote in November.

This could all be a problem — for Democrats, not for Sanders. What’s a “hardwired for Clinton” political party to do? Stay tuned. Philadelphia may be the site of the most important crossroad in post-FDR American history.