Much has been made of how there has been a substantial shift in the balance of economic power between the advanced capitalist economies (or the “North”) and some economies of the global South. It is true that very recently the hype surrounding “emerging markets” has died down, as international capital flows have swung away from them and many of them have shown decelerating growth or even declines in income as global exports fall. Nevertheless, the feeling persists that – in spite of a supposedly resurgent US economy – the advanced economies are generally in a process of relative decline, while the developing world in general and certain economies in particular have much better chances of future economic dynamism. And this process is generally seen to be the result of the forces of globalisation, which have enabled developing countries, especially some in Asia, to take advantage of newer and larger export markets and improved access to internationally mobile capital to increase their rates of economic expansion. 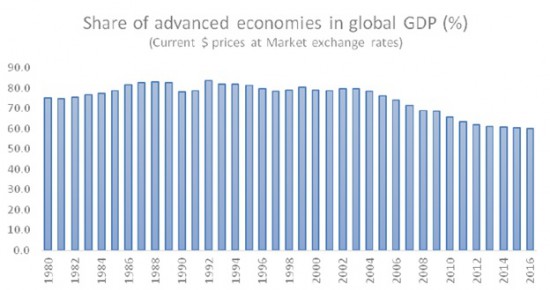 But how significant has this process actually been?

In fact, there has definitely been some change over the past three and a half decades, but it has been more limited in time than is generally presumed. Chart 1 plots the share of the advanced economies in global GDP in current US dollar prices, calculated at market exchange rates. (Data for all the charts have been taken from the IMF World Economic Outlook October 2015 database.) This shows that the share of advanced economies declined from around 83 per cent in the late 1980s to around 60 per cent now, which is really quite a substantial decline. However, the bulk of this change occurred in a relatively short period: the decade 2002 to 2012, when the share dropped from 80 per cent to 62 per cent. The periods before and after have shown much less variation, and indeed, the share seems to have stabilised at around 61 per cent thereafter.

Chart 2 looks at the obverse of this process – the change in the shares in global GDP of the major developing regions, with China treated as a separate category on its own. This shows a somewhat more surprising pattern, because it indicates that the dominant part of this shift is due to the increase in China’s share, which rose from around 3 per cent to more than 15 per cent. Once again, this happened essentially during the decade after 2005, when the share of China in global GDP at market exchange rates jumped by more than ten percentage points. Indeed, the change in China’s share alone explains 87 per cent of the entire decline in the share of the advanced economies in the period 1980 to 2015. Considering only the last decade, that is after 2005, the relative increase in China’s GDP accounts for a slightly lower proportion of the change, at 67 per cent – which is still hugely significant. 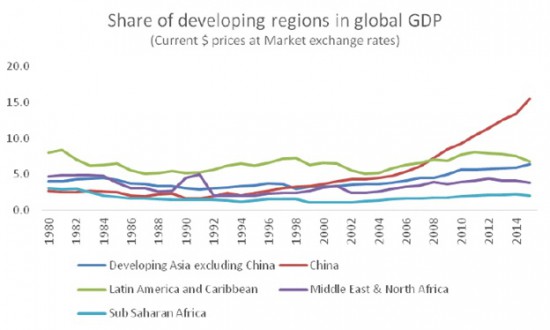 The change in shares of other regions provides some interesting insights. The Latin American region experienced a medium term decline in relative income share over the 1980s (the “lost decade”), recovered somewhat in the 1990s before declining once again in the late 1990s and early 2000s. The global commodity boom of 2003 onwards was associated with a revival in the region’s economic fortunes and the share of the region increased from 5 per cent in 2003 to more than 8 per cent in 2011, but thereafter it has stagnated and fallen with the unwinding of that boom.

The income share of the MENA region (Middle East and North Africa) appears to be very strongly driven by global oil prices, with sharp peaks in period of high oil prices and stagnation or decline otherwise, and over the entire period there has been a stagnation in income share rather than any increase. An even more depressing story emerges for Sub Saharan Africa, which showed decline in income share for a prolonged period between 1980 and 2002, and subsequently a slight recovery (from 1.1 per cent in 2002 to around 2 per cent in 2012 and thereafter) that was still well below the share of more than 3 per cent in 1980.

The only developing region that shows a clear increase is developing Asia, which in this chart excludes China to clarify the respective significance of both. But the increase in the income share of this region (minus China) has been much less marked than that for China, and most of it occurred after 2002, as the income share rose from 3.5 per cent in 2002 to 6.4 per cent in 2015. 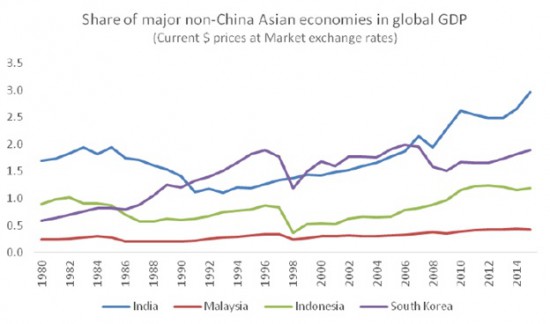 Chart 3 indicates the changes in shares of the largest Asian developing countries other than China. It is evident that in terms of increasing share of global GDP, India has been the most impressive performer over the past decade in particular, with its share increasing from 1.8 per cent in 2005 to 3 per cent in 2015. Note, however, that this is still tiny in comparison to China, and indeed, just the increase in China’s share over that decade has been more than three times of India’s aggregate share. South Korea’s share has also increased, mostly over the 1980s and early 1990s, while Indonesia’s share increase occurred mostly during the commodity boom of the 2000s.

In terms of per capita GDP, however, the Indian performance looks much less impressive than those of the major Asian counterparts. Interestingly, even the Chinese experience appears not as sharply remarkable, although still hugely better than that of India. Chart 4 tracks the movements of per capita GDP, measured now in Purchasing Power Parity (PPP) exchange rates rather than market rates. There are numerous problems with the use of the PPP measure, but for current comparative purposes it does provide some kind of indicator. This shows that by far the most impressive performance in terms of increasing per capita GDP has been in South Korea, followed by Malaysia. India shows the least improvement among these five economies, despite its apparently more rapid increase in terms of share of world GDP in the last decade. 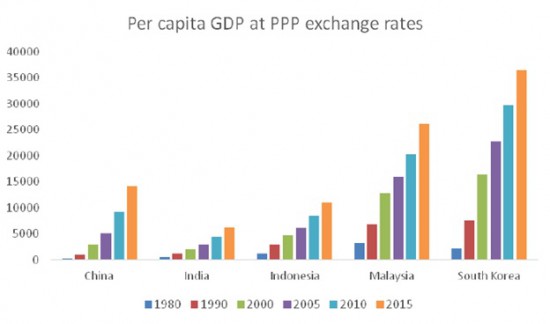 Overall, therefore, while the world economy has changed over the past three decades, this change should not be exaggerated for most developing regions, or even for most countries in what is apparently the most dynamic region of Asia.