Yves here. This is more important than it might seem. One of the key benefits of the European Union has been the ease of movement of goods and people across borders. The refugee crisis has led to a resumption of border controls by quite a few states.

This matters because, as this column confirms, the former friction-free borders produced economic gains for member states. Now that the EU is suffering stress on lots of fronts, not just refugee policy but also increasingly discordant economic relations, the border restrictions undo one of the key raisons d’etre for the entire exercise.

And I suspect some of the glue is psychological, not just purely economic. For instance, if you are in the South of France, you can pop into Italy for a lunch or a day trip. With tougher border controls (mind you, this is a hypothetical at this point), the hassle and delay would probably cut into this practice severely. That doesn’t just reduce commerce. It also increases the sense of separateness of neighboring countries.

This post does some useful, granular analysis, examining the costs of tightening borders along refugee routes versus that of the end of the Schengen system, as well as who has the most to lose.

Time and again, the Eurobarometer surveys show that a vast majority of Europeans view the free movement of people, goods and services across borders as the most important achievement of the EU. This is probably because the removal of identity checks at internal EU borders through the Schengen Agreement is a very tangible advantage of European integration. However, since autumn 2015, several EU member states have reintroduced border controls in a reaction to the refugee crisis and terrorist attacks.

Schengen has facilitated travel within Europe. However, one motivation for Schengen always has been the promotion of cross-border trade in goods and services (Ademmer et al. 2015). The idea is that the removal of border waiting times reduces trade costs, thereby stimulating cross border exchange and the mobility of service providers and consumers. This should yield higher welfare for EU citizens. The reintroduction of controls puts these gains at risk.

In this contribution, we ask:

To answer these questions, we draw on our recent research (Felbermayr et al 2016). More precisely, we apply an econometric gravity model to historical data (1995-2011) to measure the trade effects of the Schengen Agreement. We then turn to a simple counterfactual analysis based on the most recent data in which we impose border controls on certain intra-EU borders.

The Schengen Agreement, first enforced in 1995 amongst six countries (BENELUX, France, Germany, Italy), has grown over time and today includes about 400 million citizens in 26 countries (see Figure 1). Not all EU members are part of Schengen, but some non-EU countries are. All EZ countries are Schengen members, but they ratified the agreement at different times. From an econometric point of view, the often bemoaned variable geometry of Europe is an advantage. It allows us to use panel econometrics to disentangle the different effects of the EU, the Eurozone, and Schengen membership and of other trade agreements (e.g. EFTA, EEA, or pre-accession treaties).

Figure 1. Overview of the Schengen Area as of April 2016 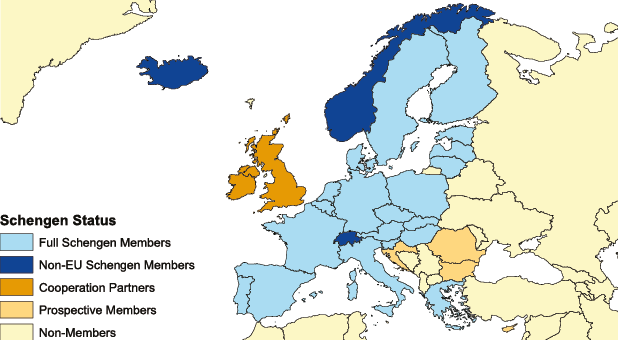 The trade effects of the Schengen Agreement have an obvious spatial dimension. A land-borne trade flow between two countries in Europe may cross only one internal border (e.g. France to Germany) or up to eight of them (e.g. Portugal to Finland). Hence, Schengen membership treats country pairs in a heterogeneous way. This feature is ignored in the small existing literature (e.g. Davis and Gift 2013). What is more, Schengen outsiders such as the UK or Turkey can also benefit from the agreement to the extent that their trade flows transit through Schengen space. To deal with this, we combine GIS data with information from Google Maps to count the number of Schengen borders crossed by truck (and ferry) along the shortest road distance between trading country pairs. This count variable is our measure of interest.

Schengen Membership Has Promoted Trade in Goods and Services…

We carried out a gravity regression analysis on data from the World Input-Output Data (WIOD) project (Felbermayr et al. 2016). This allows the separation of services trade from goods trade, and international from intra-national trade flows. The data are available for 40 countries (including 27 EU members) and have been described by Escaith and Timmer (2012). The econometric model follows the recommendations in Head and Mayer (2015). Figure 2 shows that – conditional on membership in the EU, in the Eurozone, or in any other regional trade agreement (and conditional on the usual gravity controls and a host of pair and time fixed effects) – the removal of controls on one internal border is equivalent to a reduction of a tariff by 0.7 percentage points. This effect is precisely estimated for goods, but less so for services. Numerous robustness checks in our paper corroborate this general finding. 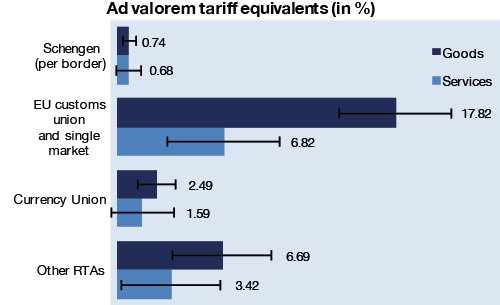 Source: Own calculations from a PPML gravity model, using estimates from Felbermayr et al (2016) and applying a trade elasticity of 5. 95% confidence intervals. RTAs are regional trade agreements such as the EU-Switzerland bilaterals, or EFTA.

We find these effects plausible. Evidence from the US-Canadian border or from current external Schengen borders suggest waiting times that average 20 minutes (Ifo 2016). Bottom-up estimates yield much smaller costs, but are less comprehensive by construction. The estimates suggest that the tariff equivalents of 3% assumed in recent policy work (Aussilloux and Le Hir 2016, Böhmer et al. 2016) may be too high. 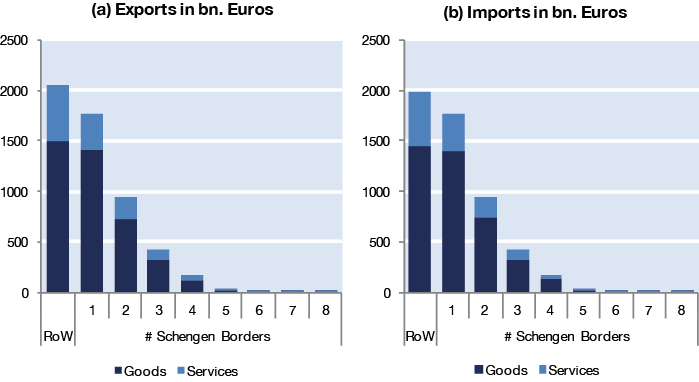 Source: Own calculations, based on data from the GTAP 9 database. RoW is “rest of the world” and shows intercontinental trade (e.g., with the US or China).

…but Some Countries Benefit More from Schengen than Others

Clearly, different countries will be affected differently by Schengen, simply because geography, history, and specialisation patterns imply that countries are heterogeneous with respect to the average number of internal borders that trade flows cross. In other words, every country has its own breakdown analogous to Figure 3.

Figure 4 shows average cost savings from Schengen for various countries. For example, across all intracontinental trade flows of Austria, Schengen amounts to trade cost savings of 0.81% for goods and 0.75% for services. Thus, the country occupies a middle ground. For countries at the periphery such as Portugal or Finland, Schengen matters more. It is equivalent to trade cost savings for goods of 1.28% and 1.59%, respectively. In contrast, Ireland, whose main trade partners are the Schengen outsiders UK and US, the savings amount to only 0.42%. Figure 4 also shows that Schengen outsiders such as Russia or Turkey benefit from the removal of internal border controls, too. 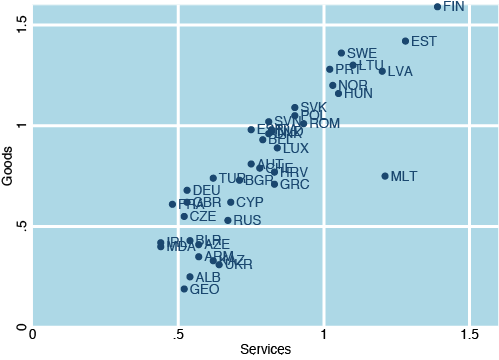 Source: Own calculations, based on Felbermayr et al (2016) and using data from the GTAP 9 data base.

The Costs of Border Controls Along Refugee Routes: An Approximation

As a reaction to the massive inflow of refugees, in September 2015, Germany introduced border controls at the Austrian border; in November, Sweden started ID checks at the Öresund Bridge; and Austria reinstated controls at its border with Slovenia and Italy. The terrorist attacks in Paris in November 2015 led to border controls at French borders. Considering all border controls reported to the EU under Article 23 et seq. of the Schengen Borders Code since summer 2015, and applying our estimates, we find that overall goods and services trade of EU-28 countries declines, on average, by 1.3% compared to the status quo in 2011; this corresponds to an annual decline in trade volumes of €70.19 billion. Using a trade elasticity of 5 in the welfare formula of Arkolakis et al. (2012), this effect lowers aggregate real GDP of EU28 members by €12.51 billion, or 0.10% of GDP. However, there is a great degree of heterogeneity, as countries differ with respect to the importance of trade with partners in the southeast of Europe (see Figure 5).

The Costs of a Complete Schengen Collapse

What if identity checks were to be reinstated at all internal borders? In this scenario, our calculations suggest that overall goods and services trade of EU28 countries declines, on average, by 4.2%, relative to the status quo in 2011; this corresponds to an annual decline in trade volumes of €221.34 billion compared to a counterfactual situation without any border controls imposed within the Schengen area. The aggregate real GDP of EU28 members would fall by 0.31%; that is, by €39.3 billion. 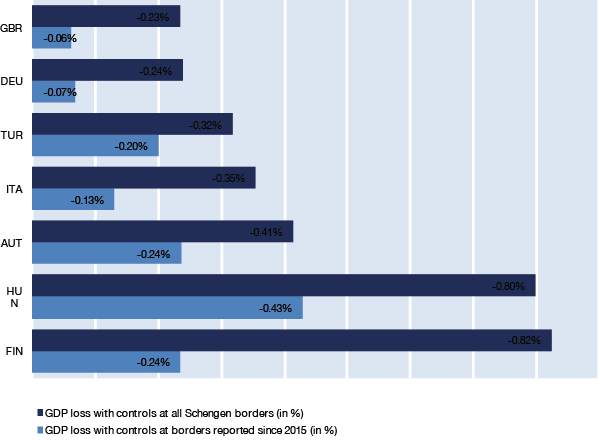 Source: Own calculations, based on Felbermayr et al (2016) and using data from the GTAP 9 data base.

Again, our analysis suggests that peripheral and/or small countries are much more strongly affected than central and/or large ones. Interestingly, Schengen outsiders such as Turkey and the UK would feel the effect, too.