Readers, this will be a brief post because it’s a lovely moist day, ideal for scatterering wildflower seeds, and I want to get out into the garden, and I bet you do, too, if you have a garden, or it has you. Now, up where I am in Zone 5b, we’re two full weeks away from Memorial Day, the traditional day for planting, but mud season is over, the forsythia is out, the lilacs are budding, and my garden is blanketed with winter detritus — the occasional student’s beer can, flattened styrofoam coffee cups, faded receipts, cigarette butts, great masses of twigs, lots and lots of road sand from the plows, and the solids left behind when the snow melted into the spring air — because I’ve been lazy. No more of that! (And to be fair, I feel like my mental filters got clogged in the past few days from processing too much news, and olds. I need a quick break.)

When I did the research for this post, I found an excellent article on permaculture in Modern Farmer, which is very much not Farm Journal, for reasons I’ll get to. So I’ll look at that, first, and if any of you are asking “What is permaculture?” you will get an answer. (There are other NC posts at the permaculture tag.) Then I’ll plug a practical and simple permaculture technique: Sheet mulch. Finally, I’ll comment on permaculture as privilege. But first, a picture from last year, because my peonies aren’t nearly this far along: 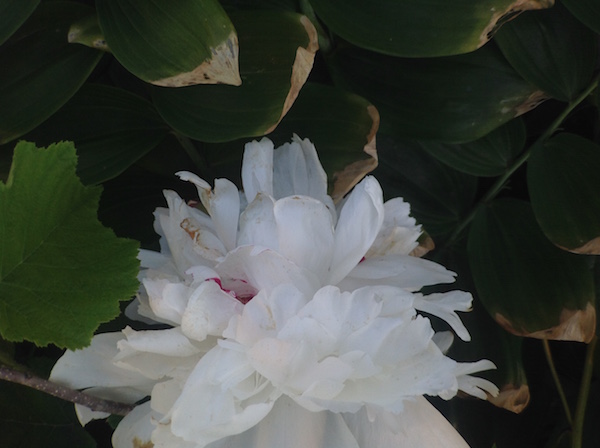 Permaculture: You’ve Heard of It, But What the Heck Is It?

Bill Mollison, the Tasmanian son of a fisherman who first coined the term 1978, defined “permaculture” as:

“The conscious design and maintenance of agriculturally productive systems which have the diversity, stability, and resilience of natural ecosystems. It is the harmonious integration of the landscape with people providing their food, energy, shelter and other material and non-material needs in a sustainable way.”

In other words, permaculture is a holistic, living-in-harmony-with-nature worldview, as well as technical approach for how to do so. Here is link to 50-some other definitions that have been espoused over the years.)

Here are some of those approaches:

(I should emphasize these are design principles, as opposed to physical laws, or dogmas.) Now, I encountered permaculture in the depths of the 2007 depression, when it did indeed seem that I would need to prepare to grow my own food on the property available to me. The wolf is a bit farther from my door these days, and so that time’s push for yield has been replaced by the sense of beauty and fulfillment that comes from growing enough food to give away, the sheer pleasure of sitting (and typing) in the midst of a blooming, buzzing, and ever-changing profusion, and learning the art of photographing the parts of the system acting in concert. (A better photograph of that (perennial) peony would include ants seeking nectar. Perhaps this year!) However, one never knows when the wolf will come closer again, and so I’m grateful to permaculture for giving me the principles to keep improving the property continuously in small ways, in case I need to strive for yield once again. Especially the soil! Which brings me to sheet mulch.

Sheet mulch is the gateway drug for permaculture. When I sheet mulch, my approach is simple, cheap, and lazy (“hammock time”). Think lasagna with three layers:

At the bottom, compost or earth, then newspaper, and then on top, after soaking the newspaper, straw (and not hay; hay has seeds, and you don’t want them. You want your own seeds). Then I punch holes through the sheet mulch for the seedlings.) Sheet mulch is great for these reasons:

1. Very little weeding. The newspaper serves as a light block, so weeds don’t sprout. (I do have a problem with quack grass where the plants have been punched in, because the soil is exposed, but generally weeds are easy to pull out of a sheet mulched bed when they do grow, because the soil is so soft.)

2. Very little watering. I was away for the month of July, which was very dry, and the tomato beds weren’t watered at all. I came back, and they are as you see [very healthy]. The straw captures any rain that falls, the newspaper lets it soak through to the soil, and the newspaper also prevents evaporation.

3. Less disease. Molds and spores and TMV live in the soil, and the sheet mulch prevents them from infecting the plants through the leaves. When I didn’t sheet mulch, and watered, the plants would get infected from splashed bare soil, and by this time [August], two or three tiers of leaves would be yellow or even blackening (depending on which mold attacked them).

4. Lazier staking. Tomatoes that touch or rest on the soil are goners. Not so with tomatoes that rest on clean dry straw (though if it rains, raise them up or pick them!)

5. Better soil. A lot of the improvement is due to the compost, the leaves, and the soil amendment. However, worms also like sheet mulch because the soil is not compacted. Worms also like darkness and moisture, which the newspaper layer provides. Further, over a season, the new mulch will settle, and open up an air gap between the soil and the newspaper. Just as in your house, the air gap insulates, and so the soil temperature doesn’t fluctuate so much. So, the worms aerate the soil and also leave their lovely nutritious worm castings. (If I were more ambitious, I’d be doing vermiculture.)

So, less work, better soil, improved work — what’s not to like?

And sheet mulch is a great way to get rid of your lawn, too. Surely you don’t want to waste your time cutting the grass!

Underlining: My soil is greatly improved. I’ve been sheet-mulching for a long time, and the soil, originally very heavy and clay-y, is now much more light and fluffy, and full of organic matter. Makes my vegetables happy! And I don’t have to do any rototilling, or double-digging, both of which damage soil structure, IMNSHO. Of course, gardening isn’t all about soil, even if the happy plant is the insect-resistant plant, and this year I plan to me more systematic and clever about setting up a rotation system, and integrating more companion plants, especially flowers, into the beds proper, as opposed to round the edges (The companion plants will also have an additional stacked function, as objects of contemplation and photography.)

Finally on Modern Farmer not being Farm Journal: I found it disheartening, not to say unnerving, to discover that Modern Farmer is funded by mining squillionare and Clinton Foundation donor Frank Giustra (even if the Medici funded Michelangelo, da Vinci, Botticelli, Raphael…) Which brings me — you did notice the words “the property” throughout? — to the question of class privilege. Why, for example, for example, hasn’t permaculture spread through the third world?[1] One answer:

I’ve been finding that throughout Central America and much of the “under-developed” (or perhaps better stated as “differently developed”) world, this appreciation of permaculture as a movement of gringos is strongly felt and deeply rooted.

As I’ve talked with different farmers, researchers, academics and others interested in alternative agriculture and ecology, the main grievance that they have with permaculture is the steep costs associated with the courses offered and the literature sold. These prohibitive costs, they argue, turn permaculture into an exclusive club that can only be enjoyed by the affluent. They have very little argument with what permaculture actually teaches or advocates for, but they find that in a region where small farmers are usually severely economically marginalized, the exclusivity of the permaculture movement is a major impediment.

Most permaculture teachers offer a two week Permaculture Design Course (PDC). The running cost for most PDCs is around $2000 dollars, give or take $500. With prices like those, it´s hard to argue against the idea that permaculture is unaffordable to 90% of the world´s farmers who might be lucky to make that amount in a year of hard work.

Though there are a few permaculture institutes in Central America, the agroecology movement is far better established. This movement, in comparison with permaculture courses, tends to offer courses and classes for free to local farmers. True, participants may have to settle for eating beans and tortillas three times a day instead of organic hummus and other delicacies of the First World alternative health food movement, but nonetheless, it’s free!

Fair enough, although I’d point out that the validity (if any) of permaculture design principles is unaffected by the cost of courses. On the other hand, this argument reminds me very much of the feelling some have that the left should live on bread and water because hypocrisy (which is a recipe for burnout and dysfunction, not coincidentally). The work of propagation, absent a Frank Giustra, demands funding, those who want to keep living in the first world need to set first-world prices, and “teach permaculture and grow rich!” hasn’t been a plan anybody I know has been able to carry out. In fact, permaculture as a business strategy will probably be marginal as long as petroleum-based agriculture remains dominant (in part because of the subsidies Big Ag extracts). So one person’s class privilege is another person’s survival strategy, sadly.

Bringing me round to “collapsing in place,” a term coined by the Archdruid:

Collapse now, in other words, and avoid the rush.

There’s a fair amount of subtlety to the strategy defined by those words. As our society stumbles down the ragged curve of its decline, more and more people are going to lose the ability to maintain what counts as a normal lifestyle—or, rather, what counted as a normal lifestyle in the recent past, and is no longer quite so normal today as it once was. Each new round of crisis will push more people further down the slope; minor and localized crises will affect a relatively smaller number of people, while major crises affecting whole nations will affect a much larger number. As each crisis hits, though, there will be a rush of people toward whatever seems to offer a way out, and as each crisis recedes, there will be another rush of people toward whatever seems to offer a way back to what used to be normal. The vast majority of people who join either rush will fail. Remember the tens of thousands of people who applied for a handful of burger-flipping jobs during the recent housing crash, because that was the only job opening they could find? That’s the sort of thing I mean.

The way to avoid the rush is simple enough: figure out how you will be able to live after the next wave of crisis hits, and to the extent that you can, start living that way now.

That, to me, is what permaculture as a long-lived (forty-year) social movement is all about: “Start living that way now.” Nobody ever said class privilege is permanent, after all. It, too, can melt away and leave only detritus behind.

[1] The design principles are portable, even if the techniques are not. For example, it always struck me as odd that the Thai gardens I’ve seen have never been mulched. One answer is that water is plentiful, so there’s no need for mulch to capture it; but that’s not true in drought years. However, I now think the real reason is that snakes, scorpions, and other critters would find a home in the mulch! With bare earth, you can see there’s nothing lurking. The tropics really are not temperate.