End of QE to cause problems for Italy, Portugal -Greek finmin warns Reuters

Euro 2016: In the deprived cites of Marseille the French national spirit of 1998 is nowhere to be seen Independent

Hurtling toward the precipice of war, Modi cements Indo-US alliance WSWS. Wat: “So they’re intent on cornering the Bear…..which as historically not gone well for those doing the cornering.”

How US Transnational Cables Are Tapped Cryptome (guurst)

UK Parliament votes in Snoopers Charter, now it goes to the House of Lords BoingBoing

How Clinton Donor Got on Sensitive Intelligence Board ABC

How Clinton aims to trump Trump on Twitter Politico (furzy). Twitter is heavily used by journalists (who overwhelmingly prefer her already) and who already report on everything that Trump does that is offensive. The campaign should be focused on what it will take to win undecided voters in swing states and hold her ground in any states where the Dem margin is not large. Does this advance that aim?

The Most Terrifying Thing About Trump’s Chances Vanity Fair (resilc). A political scientist told me months ago that the identity politics that Clinton was using to win the Dem nomination would be a loser in the general…and worse, she is falling for Trump reinforcing her reliance on that strategy.

Six times as many Sanders supporters would shift to Clinton over Trump – poll Guardian. Read the the article. I don’t see the headline claim supported by actual survey. Go look at the survey instrument (the actual questionnaire) at the bottom of the page. I do not see the question asked directly nor do I see how it can be inferred from conjoint analysis, since the respondents were given two lineups with two changes, not one: Clinton, Trump, Sanders, Johnson and Clinton, Trump, Johnson, Stein . It also shows on 259 Sanders supporters polled, not a great sample. But even if someone can explain how the conclusions re Sanders voters were arrived at, the headline made the most flattering interpretation of this statement: ” Of those who vote for Sanders when Sanders’ name appears on the ballot, 13% say they will stay home if Sanders name is not on the ballot, 41% vote for Clinton, 15% vote for Johnson, 11% vote for Stein, and 7% defect to Trump.” One could just as easily have written: “Only 41% of Sanders voters will vote for Clinton.” The article also oddly attributes to Hillary picking up in the polls due to Trump’s attack on the Mexican judge. It is likely to come at least as much from Hillary getting front page media headlines for her being declared the Democratic nominee on Monday and then on Tuesday winning California and declaring herself the nominee on Wednesday wee AM. Trump showed big gains when he became presumptive Republican nominee.

Cenk Uygur Shocked By Poll Saying 83% Of His Audience Would Never Vote For Hillary Clinton RealClear Politics. Sampling here totaly unscientific, but it is a large sample and the question was posed directly. Given the large disparity between this link’s report and that of the one above, we need a direct poll on this question with good sampling methods to get a better picture, and preferably after the convention, so as to see how Sanders voters react when Sanders officially supports Clinton (which he will, that was his deal for running under the party banner and Sanders prides himself on being a man of his word).

Party Crashing and Political Revolution: With the DNC Just Weeks Away, What’s Next for Our Movement? Counterpunch (EM)

Another Neocon Endorses Clinton, Calling Her ‘2016’s Real Conservative’ and ‘the Candidate of the Status Quo’ Alternet

There’s No Evidence That Google Is Manipulating Searches To Help Hillary Clinton Slashdot. Dan K: “Translation of title: Google Search Policy Suppresses Research into All Criminal Activity, Helps Hillary Clinton.” Moi: May be the result of the “right to be forgotten” ruling in the EU.

After Bernie, Does the Left Need a Rethink? Rolling Stone. Lordie. An avowed Socialist, with the persona of a cranky Jewish landlord, who was totally ignored by the media and then constantly attacked by it when they finally had to take notice, got to be neck and neck with Clinton in national polls. And he was also contending with an opponent that had more control over the party than any candidate in modern times. This is mind-boggling progress, even if Sanders fails to secure the nomination. Rome was not built overnight.

Hillary’s Victory and Next to Last Hurrah Counterpunch (resilc)

Why Donald Trump keeps calling Elizabeth Warren “Pocahontas” Vox (furzy). She was giving Harvard a talking point it wanted re diversity and she never claimed to be anything other than white in formal contexts but…”Warren, however, couldn’t produce definitive proof of her Cherokee ancestry, and neither could genealogists.” All oral history that may not be accurate. That was the case on the father’s side of my family. Significant divergence between what he had been told v. what he found when he investigated church records and burial sites.

Gawker files for bankruptcy and puts itself up for auction CNN

Antidote du jour. @els_tac: “Have you got my best side? A very noisy Restless Flycatcher, who was also a bit of a show-off!” 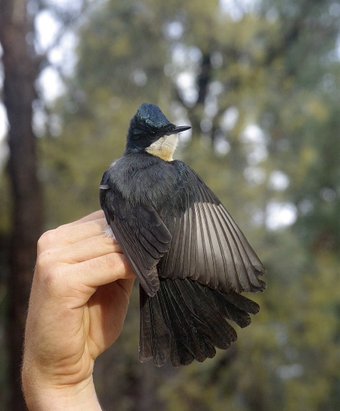