Brexit stalwarts have regularly espoused the idea that the UK can obtain restrictions on immigration, one of the top priorities of Leave voters, while still having unfettered access to the EU for trade purposes. as we said in our post, EU to UK on Brexit: “What About ‘Nein’ Don’t You Understand?”, EU leaders felt compelled to issue a firm statement after a European Parliament meeting at the end of June because it was clear that the British side wasn’t listening to what they were saying. As we wrote:

As we described yesterday, it was evident when British Prime Minister Cameron spoke at a regularly scheduled session of the European Parliament that Cameron’s demand for what amounted to a special deal as part of a Brexit, in terms of concessions on immigration, was a non-starter as far as the Europeans were concerned. We inferred from the write-ups of the meeting in what is effectively the house organ of the Conservative party, the Telegraph, that the Tories were ignoring the message.

Apparently it was so clear at the European Parliament meeting itself that the UK representatives were in their own bubble that European officials took the atypical step of not simply reiterating their position, but stating it even more firmly in an effort to puncture the delusion. From EU leaders harden stance against Brexit concessions in the Financial Times:

Europe’s leaders have dug in their heels over uncontrolled migration in the single market, scotching UK hopes for a favourable deal in a direct snub to prime minister David Cameron’s plea to recognise British voters’ concerns..

“There will be no single market à la carte,” said Donald Tusk, the EU Council president, as the group met to set out the terms of engagement for any divorce talks following the Brexit referendum.

Diplomats said the joint statement was deliberately toughened up after Mr Cameron said he would have avoided Brexit if European leaders had let him control migration.

With the explicit consent of German chancellor Angela Merkel, a sentence was unexpectedly added to the statement yesterday saying that “access to the single market requires acceptance of all four freedoms”, a reference to EU principles on the free movement of capital, labour, services and goods.

“That was our response to Cameron,” said one senior EU diplomat, who added that leaders were not expected to go into policy issues at this stage.

This is very significant from a negotiating perspective. Details can always be horse-traded but principles are another matter entirely, and the EU members are taking a unified position.

Back to the current post. The statements over the last few weeks by Theresa May, other senior Government officials, and the Tory press, suggest that the message from EU leaders has yet to penetrate the British reality-distortion sphere.

The think tank Bruegel yesterday released two posts which throw yet more cold water on British optimism about its glorious Brexit. One compares key elements of the deals that some of the countries that the UK is looking to as possible models for its post-departure relationship. Its devastating finding is that all the nations examined, (Iceland, Liechtenstein and Norway, which are part of the European Economic Area, and Switzerland , which has entered into bilateral agreements), take more immigrants as as percentage of their populations than the UK does now, as shown by the blue bars in this chart: 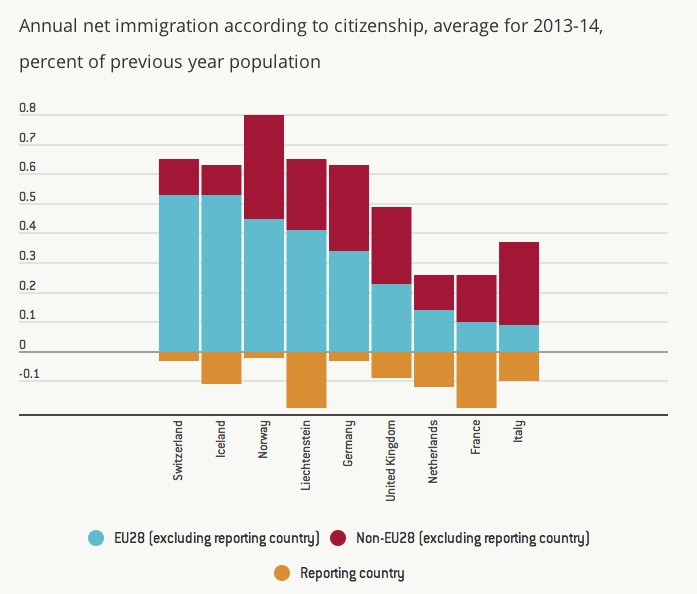 Germany also takes more immigrants than the UK does. That’s one reason the idea of cutting Britain any slack in the Brexit negotiations is so unpopular with German voters. The chart also shows something we’ve mentioned previously, that the UK takes in more non-EU immigrants than ones from the EU. Has any pro-Brexit policy maker suggested curbing their numbers? They presumably do not want to acknowledge that some were recruited to fill skill gaps, like NHS nurses. But presumably many others are deemed to be economically valuable….and that may be due to how they help suppress wages.

While the UK’s strategy toward access of the EU single market after Brexit is unclear, the experience of the four non-EU countries having access to it suggests that the conditions of access may involve:

None of these elements may look attractive to those who campaigned for Brexit.

And before Brexit fans get hopeful about Switzerland’s low contribution, bear in mind that despite being a bank-dominated economy, Switzerland does not have passporting rights with the EU for banks, but only for insurance companies. So the Swiss arrangements aren’t a ready template.

The other post, by the director of Bruegel, Guntram Wolff, is clearly meant to send a warning, admittedly in bureaucratese, that the UK side needs to lower its expectations. He says explicitly that a Noway or Switzerland-style deal is unlikely. From his post:

UK voters’ decision on June 23 to leave the EU raises profound questions about the future relationship between the UK and Europe. But a Norway- or Switzerland-style deal would not suit the UK. Negotiators will find it hard to define a solution that satisfies both parties.

With the announcement of Theresa May as conservative leader and prime minister, it looks like the UK will seek an agreement that limits the movement of labour. May, who has a tough stance on migration and a softer stance on the single market, has declared that “Brexit means Brexit.” But negotiating a special deal that is materially different to any existing models will be a long and difficult undertaking…

There are several conceivable models for the future economic relationship. But arguably none of them is satisfactory. If the UK follows the Norwegian model, it would be subject to EU rules but have little influence over them. The UK would have to fully accept all EU regulation, EU competition policy, EU jurisprudence on single-market matters and almost full payment into the EU budget. It would still have to accept the free movement of labor.

This option would indeed be very favourable to British and European business compared to leaving the single market. But it would break promises made during the referendum and it would diminish, not strengthen, the UK’s sovereignty, compared to the UK being a member of the EU.

The Swiss model is equally under pressure. Switzerland also wants to restrict worker mobility, and may in fact become the first “victim” of the Brexit negotiations as the European Commission seeks to make it clear that no country can expect to be in the single market without also accepting the free movement of labor.

So neither of these options would work for the U.K..

But the more isolationist the approach taken by the UK, and the more punitive the mood on the continent, the bigger the economic losses will be for both. A cooperative solution would be advantageous. Still, some may fear this would lead to other countries following the UK example and cherry-picking the union they want. Energy would be better spent on showing the benefits of membership.

The conundrum of defining a new deal will last for quite some time.

Wolff’s “cherry-picking” comment is an allusion to the warning Angela Merkel gave to the UK on June 28:

We’ll ensure that negotiations don’t take place according to the principle of cherry-picking … It must and will make a noticeable difference whether a country wants to be a member of the family of the European Union or not…Whoever wants to leave this family can’t expect to do away with all of its responsibilities while keeping the privileges.

In other words, there does not appear to be any overlap between both side’s bargaining positions. The Europeans perceive this clearly, yet the British appear to believe that the EU will relent on what the E regards as basis principles despite consistent warnings to the contrary. Needless to say, this is not a good foundation for productive negotiations.