Yves here. The updates in this MacroBusiness report are consistent with our reading on the arm-wrestling between Matteo Renzi versus the ECB and other Eurocrats. Short version: since early this year, Renzi has been trying to get what has widely been described as a “bail out” for sick Italian banks, of which there are many. The term “bail out” makes Renzi’s plan seem more generous than it is, since he is not proposing to prop up diseased banks, but to have them spin out their bad assets into a “bad bank”. This is similar to the approach used in the US savings & loan crisis and in Sweden’s widely praised early 1990s bank rescues. A good bank/ bad bank approach leave the cleaned up banks considerably smaller. Some banks may have so many bad loans that there is no or pretty much no “good bank” left, so you can expect this approach to lead to some consolidation too. I have to confess that am not clear as to how Renzi proposes to change the operations of the “good banks” that needed state intervention to survive.

It would seem to make eminent good sense to give Renzi the waivers he needs to rescue the banks since:

If Italian banks start falling over, the dominoes will quickly reach Deutsche Bank

As the article below points out (and we’ve stressed earlier), if Renzi is forced to do bail-ins, small Italian savers will take a big hit. Many were fraudulently sold subordinated bonds and told they were the same as deposits. That’s not true, since they will be next in line after bank equity to be wiped out in a bail-in. Any meaningful losses to these small savers would both further damage Italy’s already weak economy, and boost the Five Star movement, which already has good odds of winning in elections this fall. Five Star has promised a referendum on exiting the Eurozone. The UK leaving the EU would be very damaging economically but it’s remotely possible that it might not be a total disaster. By contrast, Italy leaving the Eurozone would be cataclysmic.

So with the stakes so high, one would think the ECB and Eurocrats would relent, since they have a perfectly good face-saving excuse for retreating from their barmy bail-in scheme: with Brexit in play, banks are already looking wobbly, and the new bail-in rules allow for rescues under extraordinary circumstances. But Renzi tried that argument, as well as another escape hatch, public interest, and was told “Nein” both times.

Why are the European banking regulators being so self-destructive? Part of the answer may be prejudice against periphery countries. But as David Llewellyn-Smith indicates, again consistent with what other analysts have sad, the authorities are wedded to the newly-nstituted bank regulations, even though banking experts all deem the bail-in procedures to be guaranteed to produce runs and shake confidence. While bail-ins would be a useful tool in a regulator’s arsenal, the bail-in rules are “one size fits all,” making them unsuitable for real-world use.

This situation is disturbingly analogous to Lehman. After the Bear Stearns rescue, there was such a strong political backlash that the Bush Administration decided it was not doing that again. Moreover, it was obvious from the media that they were not going to relent. Yet Dick Fuld nevertheless convinced himself that Lehman would get government help if he could not find a moneybags to save Lehman. That led him to blow up the one deal he could have had, an investment by the Korean Development Bank in a Lehman “good bank”. Fuld regarded it as unacceptable to have to wind down the bad parts of Lehman.

Oh, and in a telling bit of history…the successor to Creditanstalt is over 96% owned by Unicredit, Italy’s biggest bank.

While the politics are different, we again have political imperatives trumping real-world consequences. And here, the downside is more obvious than it was with Lehman.

Platinum, the Sydney-based global value investor, is defying the bearish mood and buying more European bank stocks after its positions in banks accounted for almost half of the fund manager’s losses so far this year.

The Platinum Unhedged Fund’s latest report shows that its value fell 10 per cent in 2015-16 compared with a 1 per cent fall for global equities. Platinum is not alone; many Australian fund managers who invest globally have seen returns hurt by the Brexit vote through falling positions in European bank stocks such as Lloyds Banking Group, including at PM Capital and Magellan among others.

…What is unusual is Platinum’s willingness to buy more

…”The banks’ share prices are factoring in fear of further political risk, namely, a full break-up of the European Union. The impact of recency bias plays a big role here. As we have just seen, a large country making a shock exit, suddenly the probability of further exits feels significantly heightened,” the fund manager told clients. “But we need to take into account that the European governments will react and concessions will be made.”

I am sure that Platinum is joking when it says that European banks are priced for a “full break-up of the European Union”. They have fallen a long way, however, and that rather amusing statement does not mean that it is wrong about Europe giving ground on Italy, from Bloomie: 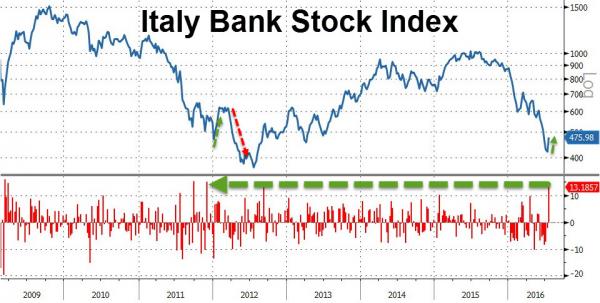 It may seem like there are many different ways this critical situation can pan out, but all bar one would be fatal for the euro zone. The only option is to bail out the banks without “bailing in” investors.

Of course the banks will be rescued. This column has previously outlined how Italian banks will be saved precisely because the alternative is the collapse of the Italian economy, which would likely precipitate the breakup of the euro.

So the crunch decision is whether bond investors share some of the cost of that bailout. Since January, the EU has legislated that investors must be bailed in, and bail-ins have happened elsewhere, e.g. 54% haircut for senior creditors of Heta Asset Resolution in Austria.

Surely the EU can’t blatantly break its own new rules just for Italy? That would set a bad precedent, completely undermine its authority, create large moral hazard within the euro zone, and weaken the euro.

But it can. And it most likely will. Because the alternative is much scarier. In Italy, too much of the subordinated bank debt is owned by private individuals. If they’re made to pay for this, then Italy’s constitutional referendum in October will fail, resulting in Prime Minister Renzi resigning and the collapse of the government.

Italy will be in crisis, and anti-EU sentiment will gain a significant boost at a time when the euroskeptic Five-Star Movement has already become the most popular party. Again, the euro zone will be in serious jeopardy.

So there’s really only one path to be followed: the one that doesn’t threaten to break up the euro zone. The Italian banks will be bailed out and investors will not be bailed in.

This will be a boost to global equities and positive- yielding bonds, yet another boon for emerging markets. It will be less good for the euro, which is trading within 1% of its 18-month high versus a trade-weighted index.

That is probably too black and white and a partial bail-in is more likely with a distinction made between small and large bond holders. So, to that extent, Platinum is probably right.

Except that that is not the real problem. This is, from The Telegraph:

The bondholders’ losses risk harming the government’s reputation at a delicate moment.

Prime Minister Matteo Renzi is already facing a close-fought referendum over a planned constitutional reform. If he loses the vote, it could mean the end of his government, and polls indicate that the eurosceptic Five Star party, headed by Beppe Grillo, could perform well in a general election, spreading further political instability through the European Union.

Italian pragmatists argue the cost of a government-backed bailout would be worth paying, to avoid financial instability. Yet the equation is not that simple.

The EU insists bondholders have to bear the cost of the recapitalisation, sparing taxpayers and forcing investors to think about the risks they are taking, to help stop future crises at banks and in governments’ finances.

Officials at the Eurogroup and European Central Bank are digging in their heels – they do not want the past five years of financial reforms undermined immediately by Italy.

Such a result would sap their own authority and open the door to similar state-backed deals in Portugal, which is also suffering from bad bank loans.

Still, even a bailout would bring political risks to Mr Renzi.

Lorenzo Codogno, former director- general of the Treasury Department at the Italian economy ministry, says there is a risk that a bail-in of retail investors could be politically toxic, even if a conversion of debt into equity, could be a “gift” for many bondholders who now have illiquid subordinated debt.

“The risk is clearly that it is not taken well by the electorate, affecting political support for the PM,” says Codogno, the current chief economist of LC Macro Advisors.

Does Platinum understand Italian politics so deeply (making it pretty unique) that it knows how this is going to play with the polity amid BREXIT, French attacks, a rising Five Star Movement, as well as the likelihood that any European bailout concession will very likely come with reform conditions that will do great harm to growth before anything improves? Platinum clearly did not see BREXIT coming so why would it be any better on Italy? The blood is up in Europe, this is not just a numbers game anymore.

Perhaps holding on at this juncture makes sense given Platinum’s losses but buying more?